Learning To Make a Difference
Votes

Learning To Make a Difference 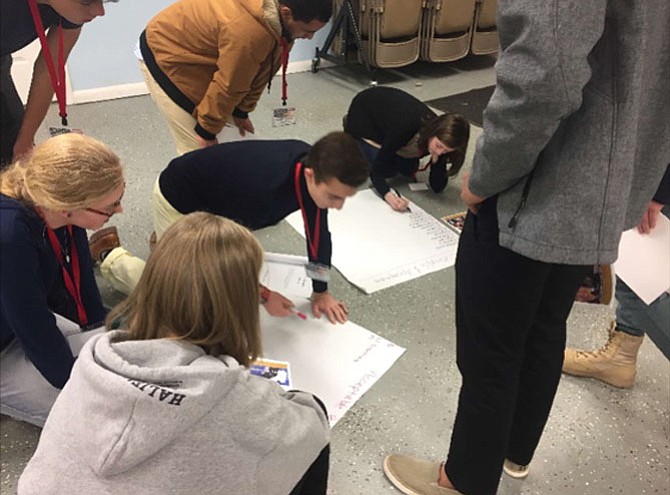 Students work together to play games and solve problems at the Civitan conference. Zack Holden leads the group here. Photo by Manuel Andrade 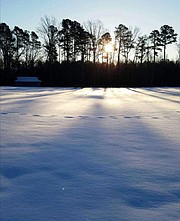 The conference was in a bucolic camping area during the early January snowfall.

Ever wondered about the blue sign on North Quincy Street near the Washington-Lee High School in Arlington which says “I-66 Civitan Garage Sale”? There is a story behind that sign which was told, in part, by local high school students who attended a conference at the Piankatank Camp and Conference Center in Hartfield, Va. over the weekend of Jan. 6, with two of their mentors, Patricia Koepsel of McLean/Tysons and Brian “Pat” Robson of Richmond.

Why is the Middle East so complex? What makes a good leader? Am I a leader? Why is the U.S. Constitution so important? These were questions wrestled by young men and women from area high schools at the annual Civitan Leaders in Freedom Conference.

“We bring them in on Friday, on several smaller buses, from Northern Virginia, from Roanoke and Charlottesville, from out in the Tidewater area,” said Robson, who has led the conference for 18 years. “We get them all on one bigger bus. None of them have ever met each other, and when they get on the bus they don’t want to know each other — but then they start to warm up. Everyone gets to ride the bus for 60 miles, and at the end of that 60 miles they have had time to look at each other and ask themselves: ‘Do I want to know you?’ Two days later they are so busy hugging each other and saying goodbye we can’t get them back on the buses. They get together afterwards. Convene their own meetings. They establish a real camaraderie.”

Nationally renowned professors of political science and law moderated exercises at the conference to teach students how to apply the principles of the First and Fourth Amendments of the U.S. Constitution as they role-play. Motivational speakers challenged everone to embrace individual differences instead of allowing them to be platforms for division.

“I learned about how to make a positive difference in the world and made close friendships that will last a lieftime,” said Brunner.

“I learned a lot through this great leadership experience,” said Will Wallace, from southwest Virginia. “I truly feel like my leadership skills were strengthened through a series of leadership and team building exercizes along with world-class speakers from across the nation. This event has truly changed my life and I cannot wait to apply the skills I learned to help change the world.”

Civitan International was founded in 1921 in Birmingham, Ala. It is an association of community service clubs. The organization aims to build good citizenship by providing a volunteer organization of clubs dedicated to serving individual and community needs with an emphasis on helping people with developmental disabilities. There are about 30,000 members — referred to as Civitans — in nearly 1,000 clubs around the world, located in 50 countries.

You have to look at Civitan on two levels: their model is builders of good citizenship, but in the 1950s there was a member of the Baltimore Club, Tom McNulty, who had a son with Down’s Syndrome, Tommy McNulty. He convinced Civitan to take its mission focus to kids with developmental disabilities. Then in the 1990s, Civitan teamed up with the University of Alabama and created the CIvitan National Research Center. That would be a separate story,” said Robson, but “if you see those blue plastic boxes with candy in them as you pay your bill at the restaurant, that is money we pour into the national research center.”

To sponsor youths to go to the conference, clubs sell fruitcakes, hold bakesales, and raise funds locally so that the cost of sending each student can be met.

“How do I pick these kids?” said Robson, “I go to the guidance counselor and ask, or sometimes see a kid at church that looks like a good leader, or go to the VIrginia Boys Home, or CIEE (Council on International Education Exchange) — we try to make sure we have at least one foreign exchange student; there were two this year, one from Brazil and one from Thailand. But the most important criteria: I want kids who will get something out of this experience.”

The conference is sponsored by the Chesapeake Division of the Civitan International. Robson said, “The theme is ‘Leaders in Freedom;’ no political ideology is espoused, and we tell the speakers, ‘at the end we shouldn’t know whether you lean to the right or the left’ — just focus on topics near to Americans and our constitution. Derius Swinton — a principal of the SOAR group, and an amazing leadership trainer and great enthusiastic motivator, speaks first, then break them for dinner, then comes Tina Ramirez, the president of Hardwired, Inc. who talks about freedom of religion. The whole basis of her organization is to promote religious freedom on a worldwide basis, and she’s been in some of the most dangerous countries in the world doing that; she gets an hour.

“Then Aaron Arnold, Junior Achievement of Hampton Roads, speaks on the free enterprise system, he’s from Colorado, almost like a tree hugger, and he relates well to this age group. Saturday morning, we were scheduled to have Andrew Meyer, consitutional attorney in private practive in Richmond, who has argued some significant cases, but he got snowed out. Normally the presenter takes one of several really thorny issue involving the Constitution and the kids are supposed to come out with a stronger understanding of how it works. You want them to understand that the politically correct answer is not always the constitutional answer, and the constituional one will always win out.

“Our last speaker is Aram Hessami, a professor at Montgomery College, he presents a session on the Middle East. He is stellar. Aram only works from a flip chart, keeps them mesmerized, and will answer any question you have about the Middle East; he immigrated here from Iran in 1979, and you don’t know where he stands but you have a really good understanding why the region is the way it is and what you can do to fix it,” Robson said.

The conference dates back to 1969, when Vincent Dalfonso, a member of the Catonsville, Md. Civitan Club and a district governor of Chesapeake District, asked Civitan clubs to recruit youths to take them to Freedom’s Foundation, a separate entity set up by Dwight D. Eisenhower in Valley Forge, Pa., to encourage good citizenship. In 1995 they decided to make some changes, and stopped taking the youths to Freedom’s Foundation, at which point the conference faltered; Robson had been helping out since the late 1980s, and when the district governor asked him to take over the conference, he agreed on one condition: they had to go back to Freedom’s Foundation. They couldn’t do overnight conferences anymore, which he thought was crucial, so their decision was: “Let’s use your talent and move the conference somewhere else, and since I am a Virginian, we moved it to Virginia. We did Camp Easter Seal in Milford, Va., one year there, and it worked OK so I was convinced we have as many talented people in Virginia as we have in Pennsylvania. We kept everything we knew would work, and just replaced their talent with our talent. We had some growing pains. Camp Easter Seal was sold, then we moved to Blackstone, Va. and now finally, to Hartfield, 60 miles due east of Richmond.

“We have the kids run the conference. That’s the idea, that they leave feeling they ran the whole thing themselves. We have 10 standing committees: the wake up committee, the news briefers, etc. and then we have the team-building sessions: one is to name all the state capitals, one is to name all the college mascots. There is a citizenship test, a Jenga game, and trivial pursuit. We break them into teams and try to not let groups form. If you are on a team with Caroline for one event, then you won’t be with her for the next event. That keeps cliques to a minimum and encourages inclusion. Leadership changes with the task: one kid will dominate in each — the sportsman or woman steps up in the team mascots game and knows them all; the student with great manual dexterity will rule in the Jenga team. Each team competes with all the others. Our goal is to create dependence on a new leader in each group: you have to let the person who can do it the best move to the forefront in order to win. I did not create this, I borrowed this from Freedom’s Foundation; but it really works, and my philosophy is, if it isn’t broken, don’t fix it,” said Robson.

What does CIvitan want out of the youths who attend the conference? “We hope those who aren’t already members of a Civitan Junior Club will start one or will join one when they become adults. Sure, it’s nice if they do something for CIvitan, but what we really want is for them to see things differently as a result. Of 30-45 kids who are at the conference, the light will really go on for about 4 or 5 of them. You will see an intellectual change. Those are the ones that are going to change the world, somehow. If they never do anything for Civitan, but as long they do something for our country, we’ve done what we set out to do.”

Robson says this is his last conference. He doesn’t want something with an intellectual baseline like this to become stale. He’s confident it will continue as long as they don’t change the structure. After 24 years of service in the U.S. Navy, this was his way of keeping on doing something for his country, and the Civitans. Anyone interested in joining CIvitan or donating to its causes can visit www.civitan.org.