Great Falls Eye Doctor Taps Out At ‘Top Of Game’

Doctor Manfred von Fricken has traded in his white coat for a pair of blue jeans. 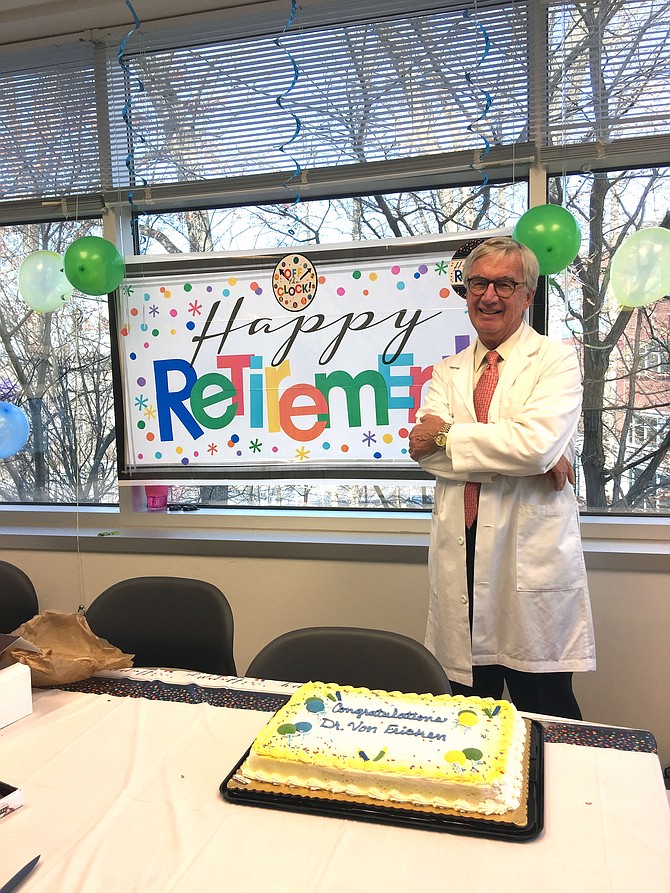 Manfred von Fricken plans to spend much more time in his library when he isn’t gardening or traveling with his wife.

A Great Falls doctor has traded in his white coat for a pair of blue jeans.

Doctor Manfred von Fricken is an ophthalmologist and retina specialist who pioneered research, treatment and surgical techniques as a founding member of the Retina Group of Washington before he chose to retire in December 2016.

“Going forward, I don’t feel like I have to walk around with a white coat on, I’m just Manfred.” — Doctor Manfred von Fricken

After medical school, he thought he would live in Florida and planned to apply for an ophthalmology residency in Gainesville when the chairman of the Department of Ophthalmology at Georgetown University at the time, Peter Evans, called him to offer him a spot at Georgetown.

He describes his acceptance of this offer as his proverbial fork in the road.

He met his wife Linda Galliher von Fricken in the cafeteria of the Sibley Memorial Hospital in Washington, D.C., on the morning of St. Patrick’s Day in 1977. He says he was eating donuts, drinking coffee and having a cigarette with a colleague who approached Linda to bum a light. She was then invited to sit with them.

They have been together ever since.

HE AND HIS WIFE moved to Great Falls in 1986 and have been long-time members of the St. Catherine of Siena Catholic Church on Springvale Road.

He and his wife raised four grown children in their Great Falls home.

Their three sons Matthew, Alexander and Michael von Fricken all attended Gonzaga College High School in Washington, D.C., and live locally. His daughter Natalie Howard, who attended Georgetown Visitation Preparatory School in D.C., now lives in Morocco with her husband who is a foreign service officer for the U.S. Department of State. Together they are raising von Fricken’s two grandchildren: Gracie, 3, and Vivienne, 1.

“My wife and I plan to go to Morocco, or wherever they are posted, to visit the grandchildren for a number of weeks,” he said.

He started telling his patients about his plans a year in advance.

“It was really difficult telling all of these patients that I was going to retire,” he said. “I see some of them once a month.”

But he was looking forward to a slower pace of life. Working on retinas meant he was constantly on call.

“It involved operating a lot of nights because you had someone come in with a detached retina and you had to get them in the operating room,” he said. “Well, the operating room is full all day long. So, all of these operations were done as add-ons.”

Retinal detachments can happen to people of all ages and requires emergency surgery to avoid permanent damage, according to von Fricken.

“All of a sudden, when the jelly pulls away, you tear holes in the retina,” he explains. “And as the retina detaches, you suddenly have a curtain coming across your field of vision. With total retina detachment, you become totally blind in that eye.”

In von Fricken’s words, retinal surgery was the “Wild West of ophthalmology,” where he and his peers made it up as they went along.

While he was a fellow at the University of Iowa in 1979 and 1980, most retinal detachments were repaired with a scleral buckle, an invasive procedure of placing a large belt of silicone around the outside of the eye, then cinching it tight, necessitating post-operative positioning and often days of inpatient hospitalization with very swollen and painful eyes, he said.

During his career, this evolved into an outpatient surgery.

His main contribution to his field was the concept of retinal detachment repair with vitrectomy alone, without the scleral buckle, he said. A vitrectomy is a surgery to remove the vitreous gel from the middle of the eye.

This evolution in thinking and technique began in the mid 1990s and today has become mainstream, he said.

His practice then began a specialty of treating diabetics who face higher risk of damage to blood vessels in the retina of the eye, which is called diabetic retinopathy. Over time, this can lead to diabetic macular edema, which is the swelling of an area of the retina called the macula.

Mark Thompson, 64, of Kensington, Md., is a Type 1 diabetic who started seeing von Fricken in 1984. The doctor diagnosed him with retinopathy in one of his eyes.

Blindness can occur if this condition is ignored.

Thompson underwent several laser treatments with von Fricken where he used the heat from a laser to seal or destroy his abnormal and leaking blood vessels in the affected retina.

“You sit in the chair, you remain totally conscience and he has … this little laser gun and he is basically looking at where those blockages are bleeding and he zaps them,” Thompson said. “It’s not really painful, but it’s tiring.”

After those treatments, Thompson’s problems stopped.

But Thompson would see von Fricken annually just to make sure his eyes were healthy.

Thompson is also a Pulitzer Prize-winning reporter who wrote for Time before he retired in December—the same month as von Fricken.

“I was a reporter for many years and a reporter is an observer,” he said. “An observer, generally speaking, needs his or her eyes.”

He credits von Fricken’s skills for the preservation of his vision.

“I’ve spent a lot of time over the last 40 years looking at computer screens and typewriters, and I’m just grateful for the work he was able to do,” he said.

The last time he saw von Fricken was last fall when he was told about his long-time doctor’s retirement. He had been a patient of von Fricken for more than 30 years at that point.

Though von Fricken’s practice had multiple locations in Maryland, Thompson felt it was worth the trip to see von Fricken in Tysons.

“I felt he was worth it to make the longer trip,” he said.

Now that von Fricken has retired, he plans on going to an office location that is closer.

Von Fricken’s practice also sees many people who suffer from the leading cause of vision loss for people over the age of 60, which also affects the macula of the retina: macular degeneration.

Macular degeneration affects more than 10 million Americans – more than cataracts and glaucoma combined, according to the American Macular Degeneration Foundation.

“Everybody in their 80s and 90s, there’s a huge population of people who are being treated,” von Fricken said.

Von Fricken’s practice was involved in the original trial for a drug called Lucentis, a blood vessel growth inhibitor that treats macular degeneration.

He would administer this or similar drugs as outpatient procedures by numbing the eye and directly injecting it with a very fine needle.

“You had to talk some people off the ledge,” he said.

But the fear of getting a needle to the eye was worth the panic because of the results, which wear off if discontinued.

“People who would have inevitably lost a huge amount of vision were able to stabilize,” he said. “The stuff worked and tens of thousands of these injections are now given at the practice every year.”

NOW IN RETIREMENT, von Fricken has replaced his daily eye examines and injections with other projects that he hasn’t had time to do.

He is currently working on organizing family photos and letters and doing a couple crossword puzzles in his library. He also wants to get more involved in gardening.

He enjoys reading eclectic nonfiction and history and is currently reading “I, Claudius” by Robert Graves.

His retirement was thoroughly planned. When he decided to inform his patients a year prior, he also decided to stop operating.

“I did my last four cases and I told my surgical staff that I was going to clean out my locker,” he said. “They were in shock.”

He wanted to go out at the “top of his game.”

“You want to stop these very fine micro surgeries while they’re still applauding,” he said. “I didn’t want to leave a trail of problems.”

He also used his final year with patients as a way to get advice about retirement. He had a wealth of patients who had gone through the process already.

“I had a lot of conversations about what people do in retirement and nine out of 10 had no regrets,” he said.

After being an expert in retinas for so many years, he is getting used to no longer being the expert in the room.

“Going forward, I don’t feel like I have to walk around with a white coat on, I’m just Manfred,” he said.