Era of the Iron Fist: How Did Democrats Rule the House of Delegates?
Votes

Era of the Iron Fist: How Did Democrats Rule the House of Delegates?

Democrats complain about Republican heavy-handedness, but were they any better? 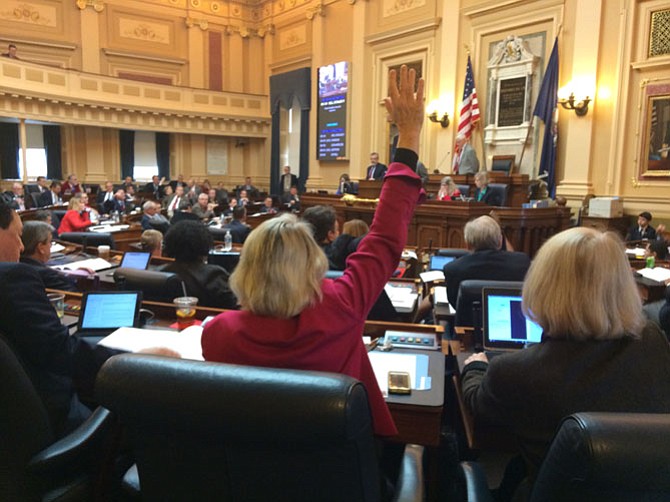 Democrats in the minority raise their hands to support a bill the Republican majority wants to kill. Photo by Michael Lee Pope.

Democrats were in many ways worse when they were in power, although Republicans have created new tricks of their own.

Until the time Republicans seized power of the House of Delegates after the election of 1999, Democrats had a rock solid lock on control of the oldest continuous legislative bodies in the New World. And the century of unfettered control did not have a positive influence on their leadership style. Sometimes they would kill bills without ever hearing them. Other times, they would lump bills together in a block vote and kill dozens or more in a single vote.

Unlike Republicans, they had a practice of sending bills to committees that never met. Democrats also had a practice of seating Republicans at opposite ends of committee rooms so they were unable to communicate and coordinate during committee meetings. One of the more infamous practices was killing bills that came to the House floor as a matter of revenge, even memorial resolutions.

“Just because the Democrats ruled with an iron fist, that’s no reason for us to do the same,” said House Speaker Bill Howell. "I’m sure we both have room for improvement.”

Democrats say Republicans are no saints. Since taking power almost 20 years ago, they created a system of killing bills in unrecorded subcommittee votes. As a result, a handful of Republicans can kill bills introduced by Democrats without being on the record. And the subcommittee meetings are often scheduled for 7 a.m., when members of the public are not around to object or testify. The longest serving member in the House, Del. Ken Plum (D-36), acknowledges that Democrats would kill bills without ever considering them.

“We heard a lot of complaints about that for a lot of years about how bad Democrats were when they were doing that,” said Plum. "Now we find that is happening in many committees across the Capitol, for example most recently the P&E Committee where they dispensed with the redistricting bills in one motion.”

LAST MONTH, the Privileges and Elections Committee dispatched more than two dozen constitutional amendments in a block vote despite objection from Democrats who wanted a recorded vote on each proposal. A few days later, freshman Del. Jennifer Boysko (D-86) called a press conference to complain that Courts of Justice Chairman Dave Albo (R-42) killed her abortion rights bill without ever scheduling it for a hearing. Longtime members recall that Democrats did they same thing when they were in power. Majority Leader Kirk Cox recalls an experience he had as a freshman Republican in 1990, when he had his first bill before the Courts of Justice.

"I literally waited until 1 o’clock in the morning, then the chairman told me that my bill was going to subcommittee number five,” said Cox. “Everyone is chucking in the audience, and I ask why everyone was chuckling, and they tell me there is no subcommittee five.”

Perhaps the most infamous use of power was by longtime Democratic Leader Dickie Cranwell. Longtime Republicans say when Cranwell heard somebody on the other side of the aisle say something he did not like, he would hold up three fingers. When that happened, according to Republicans, the next three Republican bills would die — regardless of what they were about. This would include things like memorial resolutions honoring the lives of people who had recently died.

“That’s a fairy tale,” said Cranwell, who has now retired from politics. “Now I could be difficult to deal with sometimes, but that three-finger thing never happened.”

Speaker Howell and Leader Cox say they saw it happen, and Cranwell’s three-finger salute is legend in the halls of the Capitol. But it may also be a myth, depending on who is telling the story. One feature of Democratic rule that everyone agrees on, though, is the late-night meetings. Democrats would often hold committee meetings that would stretch on well past midnight on many occasions. Republicans say they believe that was a trick to wear people down, allowing them to kill bills simply because people wanted to go home and sleep. When they took power, they moved those committee meetings to early in the morning.

“In the early years, the only real difference between the Republicans being in control and the Democrats being in control is that when you had a 7 o’clock meeting it was at a civilized hour of 7 p.m. not 7 a.m.,” said Del. Vivian Watts (D-39). “While it may be just a matter of just a different lifestyle approach to things it does freeze out the public.”

Watts says nighttime committee meetings allow members of the public to travel to Richmond and testify, and she saw that happen regularly when Democrats were in power. Now that Republicans consider bills in early morning hours and kill bills in unrecorded votes, the public has been excluded from process because it’s much more difficult for people to come to Richmond at that hour. But timing is not the only change. Longtime members say there are larger changes in the political culture of both parties.

“On most issues, there was somewhat of a coalition of Republicans and conservative rural Democrats that would basically determine the outcome,” said Sen. Emmett Hanger (R-24), who served in the House from 1983 to 1992. "So I think it was not a liberal body at that time. It was actually a more congenial body.”