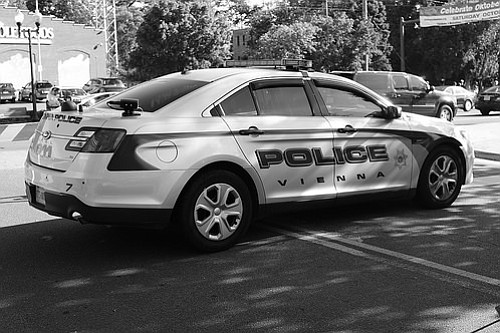 Vienna — The following summary contains various incidents of general interest as well as vehicular crashes handled by the Town of Vienna, Virginia Police Department from

Dec. 30, 2016 – Jan. 5, 2017. Readers are reminded that an “arrest” is based upon probable cause and does not always mean that someone was physically taken into custody. Furthermore, it does not mean that an individual is automatically guilty of a crime. Judicial outcomes and post-arrest proceedings can be researched through the appropriate court’s website.

A resident provided payment to a man who was soliciting door to door for tree trimming services. The man has not completed the work and refuses to refund the payment.

This case is being investigated.

An employee advised their company was given a check written on a fraudulent account. This case is under investigation.

A resident reported his bicycle was stolen from the carport.

A resident found unauthorized charges to one of his credit card accounts. This case is under investigation.

Officers responded to assist with a resident who was suffering a medical emergency. The resident was transported to an area hospital by rescue personnel for evaluation.

An individual was located inside an abandoned home. Officers checked with the builder responsible for the property who advised he knew the man, and although he did not have his permission to be on the property, he would not pursue charges for the unlawful entry.

While MPO Lose was investigating an Unlawful Entry (Incident #16-010902) he found that the man in who was in the home was wanted on an outstanding felony warrant in Fairfax County charging Shoplifting.

MPO Lose arrested the 40 year old man from Branch Road in Vienna and transported him to the Fairfax County Adult Detention Center where the warrant was served and the man was held on a $5000 secured bond.

Officers responded to the report of a man illegally hunting deer. Ofc. Harter located the man who had a deer that had been freshly killed with a bow and arrow in the bed of his truck. The man advised officers that he had killed the deer in the area off the W&OD Bike Trail.

This case is under investigation.

Ofc. Reedy observed a driver commit a series of traffic violations and initiated a traffic stop. Upon his interaction with the driver he detected possible signs of impairment. After the driver failed a series of field sobriety tests Ofc. Reedy arrested the 39 year old female from Stillwood Circle in Falls Church, Virginia for Driving While Intoxicated. She was transported to the Vienna Police Station where she was given the opportunity to provide a sample of her breath for analysis, which she refused. She was then transported to the Fairfax County Adult Detention Center where she was charged with Driving While Intoxicated and Refusal and held on a $1000 unsecured bond.

A resident was bitten by a cat they are taking care of for a family member. The resident had accidently stepped on the cat, which caused the animal to snap at them. The resident was advised of the 10-day quarantine period. ACO Barker will follow up on this case.

An employee reported a man came into the office with a woman and an infant. The man began acting disorderly and assaulted the employee and a patient in the office before abruptly leaving. Ofc. Bulti was able to contact the man who came to the Vienna Police Station the following day. Ofc. Bulti arrested the 23 year old man from Chain Bridge Road in Vienna and transported him to the Fairfax County Adult Detention Center where he was charged with two misdemeanor counts of Assault and held on a $1000 secured bond.

A resident reported that her teenage daughter has not returned home and is not answering her cell phone or text messages. The daughter returned home safely later in the day.

A resident reported an argument she had with her adult son that began to escalate when he pushed her. There were no signs of injury and the resident did not wish to pursue charges.

PFC Tremont observed a driver commit a series of traffic violations and initiated a traffic stop. Upon his interaction with the driver he detected possible signs of impairment. After failing to complete a series of field sobriety tests he arrested the 47 year old female from Silvershadow Court in Lorton, Virginia for Driving While Intoxicated.The passenger in the vehicle was also intoxicated and was offered the opportunity to contact a friend for a ride, but he refused. MPO Lyons arrested the 39 year old man from Silvershadow Court in Lorton, Virginia for Drunk In Public.

The driver was transported to the Vienna Police Station where she was given the opportunity to provide a sample of her breath for analysis, which she refused. Both subjects were then transported to the Fairfax County Adult Detention Center where the female was charged with Driving While Intoxicated and Refusal and the male was charged with Drunk In Public.

A resident reported his wife removed cash and jewelry from the home.

A resident reported her GPS missing from her vehicle.

A resident reported that her daughter left the home earlier in the evening after they had an argument and has not returned. The juvenile returned home later the same day.

A resident reported his vehicle was missing from his residence. The resident believed his friend had taken the vehicle and did not wish to pursue charges. Officers searched the area and gave a lookout to surrounding jurisdictions.

A resident advised that two women came to her door looking for someone to teach them Arabic. The women left the area without incident.

Ofc. Sterling responded to the residence after receiving a report of an elderly, terminally ill man who had passed away. After speaking to the family he determined there were no signs of foul play.

A citizen left her vehicle legally parked in a parking lot. When she returned she found that her vehicle had been struck on the driver side. The other driver did not leave their information.

The driver of Vehicle-2 left her vehicle legally parked in the parking lot. When she returned to the vehicle she found minor damage to it. She believed the damage was caused by a truck that had been parked next to her. The driver of the truck, Vehicle-1, was located. He advised he did not realize he had struck the other vehicle.

Vehicle-2 was traveling northbound on Glyndon Street with a green light for the intersection of Maple Avenue. Vehicle-1 was traveling westbound on Maple Avenue and ran the red traffic light colliding with Vehicle-2 in the intersection. The driver of Vehicle-1 was issued three summonses charging Failure to Pay Full Time and Attention, No Driver’s License and No Insurance.

The driver of a legally parked vehicle returned to find his vehicle had been struck. The driver of the other vehicle left the scene without providing their information.

Consider joining one of the premier law enforcement agencies in Northern Virginia. The Town of Vienna Police Department offers a competitive salary and excellent benefits. For application information please call 703-255-6350 or visit: http://agency.governmentjobs.com/vienna/default.cfm

Citizens are reminded to PLEASE call and report suspicious activity. Even if you choose not to provide your name or other personal information, we still need your help as extra eyes and ears in the community.