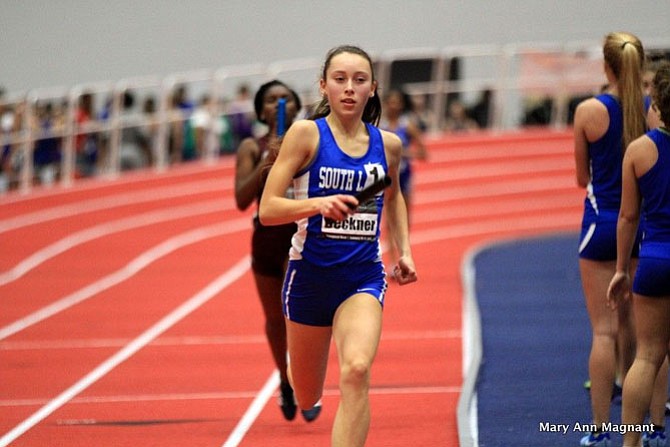 South Lakes High School’s Olivia Beckner capped off the regular season with a personal best and school record in the mile at the Virginia Showcase Invitational indoor track and field meet Jan. 13-14 at Liberty University in Lynchburg, Va.

Beckner also teamed with sophomores Sophie Halkett, Cara Hutson and senior Devyn Jones for a 6A State Championship Meet qualifying time of 4:05.26 in the 4x400 meter relay at the meet which featured some of the top high school teams on the east coast and Jamaica.

Junior Ronak Cuthill won the shot put competition with a throw of 47-01.00, which also qualified him for the region meet. Seniors Timiebi Ogobri and Don’ta Whitley ran region qualifiers in individual events and together as members of the 4x400 meter relay team. Ogobri ran a 6.62 in the 55 meters while Whitley finished the 300 meters in 36.65. They joined junior John Eggeman and sophomore Stevie Jones for a 3:32.76 in the relay.

South Lakes will compete in the Liberty Conference Championship Thursday, Jan. 19 at the Prince George’s Sports and Learning Complex in Landover, Md. The two-day event will conclude Saturday, Jan. 28. SLHS is the five-time defending girls champion and has won the boys title eight consecutive years.