Vienna: Giving Voice to the Voiceless, Hope to the Helpless
Votes

Vienna: Giving Voice to the Voiceless, Hope to the Helpless 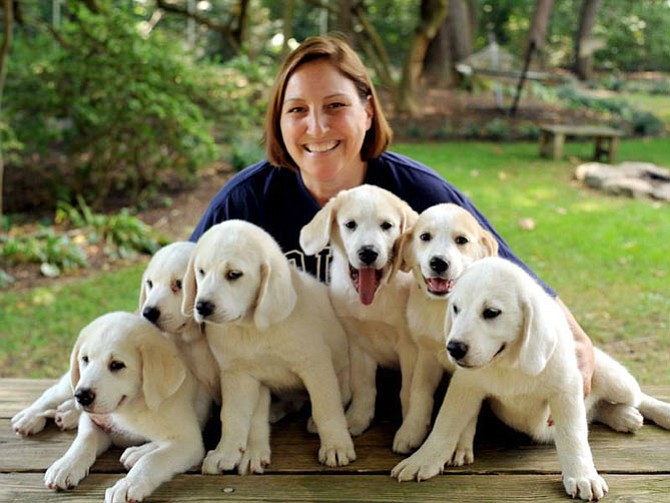 Liz DiFrancisco is of the mind that you can’t have too many foster dogs in your heart and home. She focuses on Great Pyrenees rescue.

Vienna — Most pet parents embrace their non-human family members as, well, as “family.” While the most common family pets are dogs and cats, there are people who count themselves as custodians of other creatures, from rabbits and snakes to rodents and birds. Not all animals are fortunate-enough to have a forever-home where they are loved, cared-for, protected, and pampered. Selfless humans step in on these animals’ behalf, promoting their welfare and publicizing their quest for a home.

Many people ask: “how can I help? I can’t keep a pet myself …” For those who cannot permanently home a pet, there are diverse opportunities to lending a hand. Volunteers foster, take photographs of shelter/rescue pets for publicity, walk dogs at shelters or otherwise lend a hand to rescue groups, volunteer at thrift shops run by animal rescue groups, or donate supplies to shelters and rescue organizations. Never declined is financial support.

Most rescue groups do mobile rescues where they will travel to a high-kill shelter and bring the animals to safety and to an area where the animals have a greater chance at being adopted. The no-kill animal rescues keep safe pets not adopted through fostering or their own shelter facilities. The Fairfax County Animal Shelter currently is running at a 90 percent no-kill rate for adoptable pets, among the best in the country. Not all pets in shelters are abandoned, abused, or found as strays. Many are surrendered because their custodian has died, is deployed, or is no longer capable of caring for the animal; they are used to loving homes.

In part one of this feature on helping homeless pets, you meet some local volunteers who have reached out to the animal rescue community with selfless gifts of time and talent:

Korff uses her photographic skills to help the homeless animals of the county shelter to find a permanent home. Each photo pays tribute to the personality of the pets waiting for someone to love them. She gives them a face which, in turn, introduces them to citizens whose hearts are open to saving a life.

Korff herself has taken a foster animal into her home as a need arises; these days, she donates a couple of hours every week at the FCAS photographing pets there up for adoption. Another volunteer helps handle the animals that Emily will photograph. FCAS then used the dogs on their website and on social media. FCAS uses “Petango” search engine for rescue shelters to promote their pets.

“We usually get a pretty-good response from social media when the photos are posted. I believe that photos do help them get adopted,” Korff said.

Liz DiFrancisco, of Vienna, began fostering homeless dogs about six or seven years ago, when her children went off to school. A former teacher who stayed home with her young children, Liz wanted to do something “beneficial” as a stay-at-home mom with family dogs. Her earliest fosters came from a golden retriever rescue. After adopting a puppy that was half-golden retriever, half-Great Pyrenees, DiFrancisco went into Great Pyrenee rescue. The DiFrancisco house is home to four “permanent” dogs and however many rescues come Liz’s way.

She says she loves taking in the unwanted babies and watching them grow. Although some come to her home as older dogs, the puppies who DiFrancisco fosters are not to be adopted out until they are over 11 weeks old. Her largest litter at one time was seven puppies and it’s not as hard as others imagine it is raising babies. “Housebreaking is easy with the big dogs showing them what to do; the older dogs do the training.”

Lots of dogs need foster families, to teach them how to live in a house and be part of a family, she said. “When natural disasters happen in Louisiana, South Carolina, Kentucky, thousands of animals are lost or left behind. Many end in kill shelters, where they stay for 2-3-4 days before they are put down.” Rescue groups and shelters take animals from the south and move them north, where they have a better chance of being adopted rather than being put-down quickly, DiFrancisco said.

“I feel as if I’m doing something beneficial for homeless pets.”

Lona Ichikawa, volunteer Treasure Hound thrift shop, grew up in Vienna in the 1960s. She served in the U.S. Army from 1977 to 1980, retiring from a government job in early summer of 2015. For years, Ichikawa walked dogs at the no-kill sanctuary operated and owned by Friends of Homeless Animals FOHA. When Ichikawa developed severe knee problems, she remained supportive of FOHA, recognizing that FOHA’s thrift shop needed volunteers to stock and staff the store in Chantilly.

Her own “Little Man” was but one year’s old when he was picked up off a street in West Virginia and placed in a shelter in Morganstown. Ichikawa drove there to bring the fluffy little lap dog home. That was more than five years ago and since Dec. 7, 2011, Musashi has been best-friend to Ichikawa, even accompanying her to her volunteer stint at the Treasure Hound. Musashi, who, seemingly, takes his job to-heart, interfaces with the other volunteers and some customers. Ichikawa volunteers in the shop two days a week and regularly posts photos of the store’s merchandise on her Facebook page.

“Even after my knees gave out, I wanted to support FOHA; they are a no-kill shelter. Volunteering there allows me to bring Musashi with me.”

The Treasure Hound is located at 14508-D Lee Road, Chantilly.

Sacripante’s Facebook page, NoVa Cats, is credited with rehoming more than 25 cats who were available for adoption. She photographs many of the cats posted on her page and fosters cats in her home, usually, she said, senior cats or those with behavioral challenges.

Sacripante’s photos of senior cats well into their life spans are playful yet heart-tugging, and, her descriptions of their personalities – quirks and habits – give life to her images.

“You are giving a voice to the voiceless… Anyone can foster [through a rescue organization]; it’s great for people who travel because it allows you to have a pet in the home while having a resource to relieve you when you travel.”