Vienna: On the Way to Forever Homes
Votes

Vienna: On the Way to Forever Homes

The Korffs of Vienna foster dogs who wait for a family to love them. 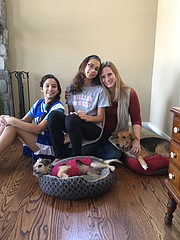 Vera and Alanna Korff help mom Emily to foster puppies and adult dogs from HART. Some rescues never leave, and make their forever home with the Korffs. 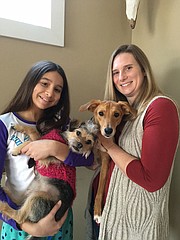 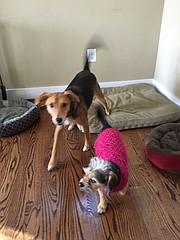 Nico, one of a litter born in HART’s transport van, joins two older but smaller “siblings” in the Korff household.

For many families, watching the family pup frolic and play around is fun. For the Korffs of Vienna, watching three pups frolic and play is three times the fun. Rescuing and fostering is a four-person family activity and Emily Korff, fosterer-in-charge, leads the passion.

“One of the best things about fostering is that you get to see these dogs in your home and how they get along with your family and other pets,” said Emily Korff. “In some cases, you find you and the dogs are not a good fit.”

The Korffs have three family dogs, all rescues, and bring in dogs to foster from the Homeless Animals Rescue Team [HART] as the need arises.

Nico, the youngest and most rambunctious of the Korff canine family, was born to a litter in a transport van operated by HART, in the spring of 2015. During the three-hour drive from a high-kill shelter in rural West Virginia to Fairfax County, Nico’s mom delivered seven puppies and gave birth to one more after mom and her litter arrived at the Korff home. While mom and her other babies were adopted out to local families, Nico never left the Korff home.

Nico is sibling to Leia and Lucy, and Korff likes to say that Lucy and Leia helped “mama” raise the pups, corraling them and keeping them in-line.

“I know where all the babies are,” said Korff. “When you give them up, you’re always a little sad but it makes you happy to see them in their new homes.”

WHEN PETS AND HUMANS are a good “fit,” the new family can adopt the pet. HART requires the adoptive to go to two weekly adoption events to see the dogs, along with a HART/adopter interview. HART will take back a dog that does not work out but their goal is to place the animal in a forever-home. HART looks into past pet-guardianship. “They want to make sure you’ve been a responsible pet owner in the past.”

Like many rescue groups in the metro D.C. area, HART makes regular runs to pick up animals close to euthanasia in their shelters or homes. The dogs come from the local community or to rural shelters, bringing surrenders or strays born elsewhere to HART’s home area of Fairfax County.

Korff began fostering HART pets 13 years ago before she and her husband Yanek had children. At the time, she just wanted more companions in their home. Her first adoptee was a cat, adopted through HART, in 1999.Through the years, the Korffs have fostered dogs, cats, birds and fish. Penny, a Border Collie “foster-fail,” lived with the Korffs for 12 years until her death at age 16.

A professional photographer, Korff chronicles the “cuteness” through a camera lens, occasionally offering her expertise to HART as a means of adoption promotion. Korff created a “family” album of the transport-pups posing with American Girl dolls; she brings out the personalities of the pets.

“When we first started, I wanted a dog in the house, a furry creature,” Korff said. Korff and her husband both wanted a dog. Now that the Korff children are older, Emily and Yanek are getting them involved in rescue volunteerism.

“It teaches them to care about someone other than themselves,” Yanek Korff said. The kids, Emily Korff said, know that rescue groups need money to sustain their mission so the girls help raise money to this end. In December of 2014 and 2015, Vera, 10, and Alanna, 12, sold their old toys to donate money to HART.

“I like helping dogs because they’re my favorite animals,” said Alanna. “I want to open a rescue group for dogs and horses when I grow up.”

Alanna and Vera are learning all about having pets in the family, including the challenges of pet ownership. Most rescues come from bad situations, Korff said. “Our kids are learning about the needs of all the homeless pets in the world, and, they are doing their part to help them.”

“That’s a quality you want your kids to learn.”

WHEN YOU ADOPT from a rescue group, you know that the pets have been checked by a vet, spayed or neutered, and are up to date with vaccines, Korff said. All different types of dogs and breeds are out there, waiting for a family to love them. There are breed-specific rescue groups around the country.

“When you adopt from a rescue, you have an opportunity to adopt a pet that is just for you,” said Korff. “You can’t do that when you buy a pet.”