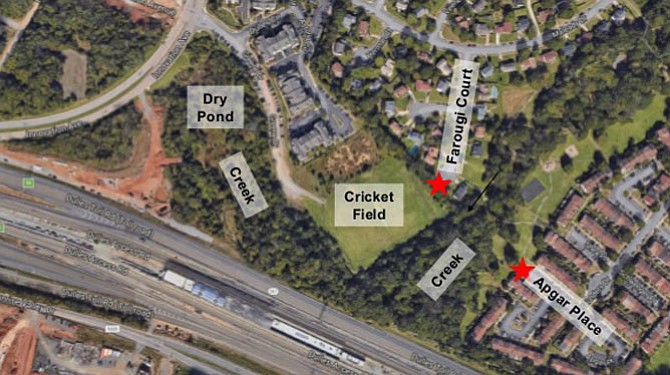 The designs contend with the existing conditions of the location: Two creeks that exists on both ends of the paths and the Dulles Greene cricket field that sits off Greene Drive in the middle. Photo courtesy the Fairfax County Department of Transportation

Alternative A, the preferred option by FCDOT, offers the most direct access to the station and includes two large bridges that span the floodplains. It is an estimated 0.34 miles to Apgar Place and 0.26 miles to Farougi Court. The cost estimate is $6.6 million.

Alternative B offers direct access to the station, but is slightly longer than Alternative A. It includes two large bridges that span the floodplains. It is an estimated 0.35 miles to Apgar Place and 0.3 miles to Farougi Court. The cost estimate is $6.6 million.

Alternative C is the longest route that offers indirect access to the station with one short bridge to go over one of the floodplains while avoiding the other floodplain by connecting to a future sidewalk along Innovation Avenue. It is an estimated 0.49 miles to Apgar Place and 0.41 miles to Farougi Court. The cost estimate is $1.6 million.

Feedback is being sought on the design for a path that will connect the future Innovation Center Station on the Silver Line of the metrorail to pedestrians in Herndon.

The Fairfax County Department of Transportation held a community meeting about the shared-use path for the station on Thursday, June 29, in the cafeteria of Herndon Middle School.

The Washington Metro Area Transit Authority metrorail station and its kiss-and-ride facility are being built on the north side of the Dulles Toll Road. The path up for debate will connect the structures to the Reflection townhomes community on Apgar Place and the Reflection single-family homes on Farougi Court, as well as the Lake Homes townhomes nearby.

“We’re really trying to provide bicycle and pedestrian access to these neighborhoods to the Metro to encourage multimodal use and access to the metro,” Lauren Delmare, FCDOT transportation planner, said during the meeting.

ALL OF THE DESIGNS include lighted, 10-foot-wide shared-use paths designed for bicycle and pedestrian use and contend with two creeks on both ends of the path and maneuvering around the Dulles Greene cricket field that sits off Greene Drive in the middle.

“The grades are less steep so that bicycles can use them and the turns are a little wider for bicycles as well,” Delmare said.

Alternative A is the preferred option by FCDOT after it conducted scores on each of the designs:

Most of the participants of the meeting concerned with one aspect that the new Metrorail station would bring to their communities: increased competition for street parking.

Members of the Reflection Homes Association and Lake Home Association were present, voicing their anxiety.

“That’s the only thing I’m worried about,” Jim Pyle said during the meeting. He lives on Maleady Drive, which is adjacent to Farougi Court.

The FCDOT is recommending the homeowners near the new station apply for the county’s Residential Permit Parking District, which would prohibit non-residents from parking on public streets near their homes.

The permit process the FCDOT recommended to the affected homeowners was somewhat arduous.

Their homeowners associations must first send a request to their representative on the Fairfax County Board of Supervisors, which is Hunter Mills District Supervisor Cathy Hudgins in this case. If approved, the FCDOT will then provide the applicants with petition forms with a map of the proposed parking district areas. Signatures must then be gathered to verify that at least 60 percent of the homeowners supports the proposal, with more than 50 percent of support from each block face.

“You all have to agree that this is what you want,” Delmare said.

THE PETITIONS then need to be returned to the district supervisor with payment of $10. The district supervisor then forwards the payment and petition to FCDOT. The Board of Supervisors then conducts a public hearing and approves the proposed parking district. If all of these steps are successfully completed, the FCDOT then installs signs on the affected roads and provides permits to residents.

The residential permit process usually cannot be initiated until a parking issue manifests in the neighborhood, according to FCDOT. Since the capital project is anticipated to cause a parking problem, the FCDOT is expediting the process by allowing the nearby residents to apply for the parking district prior to the Metrorail station opening and attracting increased traffic.

“Signs are installed, hopefully before you have a problem,” Delmare said. “That is the process that we are trying to set up with this expedited process.”

Comments from the public about the options for the path are due to the FCDOT by close of business, Thursday, July 13, and can be submitting online at http://www.fairfaxcounty.gov/fcdot/pedestrian/innovationstationpath.htm or by mailing written comments to:

The FCDOT has a few years to get the pathway constructed, since the six new stations on the Silver Line of the Dulles Corridor Metrorail Project are not anticipated to be operational until 2020.