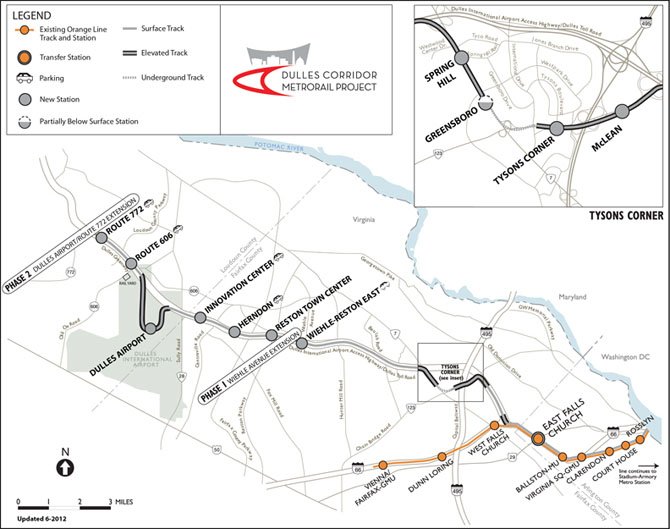 “There is a benefit in planning so far ahead,” said Kris Morley-Nikfar, Transportation Planner with the Fairfax County Department of Transportation. “The results of this study will be one of many tools used by government staff to make funding recommendations to the Fairfax board of supervisors.” It was also one of the final meetings of the Herndon Metro Advisory Group, a group of 15 citizens formed to guide the study in coordination with Fairfax County Department of Transportation (FCDOT) staff, making sure diverse interests of the study area were addressed and represented. 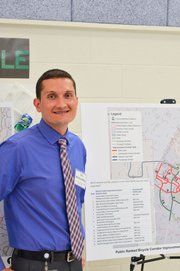 Kris Morley-Nikfar, Transportation Planner with the Fairfax County Department of Transportation announced the results of a local survey at a public workshop at McNair Elementary School in Herndon, VA.

Metro took control of the Silver Line May 27, starting a 90-day testing and training period. Wiehle-Reston East in Reston will be the end of the Silver Line for at least five years. Phase 2 is expected to be complete in 2018, taking passengers to Reston Parkway, Herndon, Route 28, Dulles International Airport and Ashburn.

“I think the results were consistent with the feedback,” said Kristin Eddy, a resident of Herndon and bicycle enthusiast. “I think being able to give our input and have our voices heard was satisfying. What will be gratifying is to see the studies come into fruition for bicyclists and pedestrians.” The consulting firm of Kimley-Horn and Associates, Inc. worked with the Advisory Group to identify, confirm, and guide the analysis and development of recommendations. “I think the county is taking a great approach on making sure the metro stations are accessible by foot and bike,” said David Whyte, a transportation planner with Kimley-Horn and Associates, Inc.

Approximately 200 persons completed an online survey for possible pedestrian and bicycle corridor improvement projects. According to the survey, an improvement of a pedestrian bridge at the Dulles Toll Road and Monroe Street crossing was the most popular pedestrian corridor project for the Herndon area. Winning the most votes in the northern area of Herndon was a shared-use path to support multiple recreation opportunities including walking and bicycling for the Sugarland Run Trail Extension to the Herndon Station. The most popular bicycle corridor project in the southern area of Herndon was a bike lane at Sunrise Valley Drive from Fairfax County Parkway to the Innovation Center Station.

The Herndon station is planned to be in the median strip of VA-267 adjacent to the current Herndon-Monroe Park and Ride parking garage and bus station, on the south side of the highway. The Innovation Center WMATA station will be located adjacent to the Virginia Center for Innovative Technology at the intersection of the SR 267 and SR 28 near the Fairfax/Loudon county line. They are scheduled to begin operation in 2018.

Jeffrey J. Fairfield, a resident of Herndon, was one of the local citizens in the advisory group who studied with FCDOT staff transportation options. “It was very well executed,” said Fairfield. “I think it will give county planers a lot to work with. Now the challenge will be the resources.” Metro General Manager and CEO Richard Sarles announced the opening date for the Silver Line service to be Saturday, July 26. The five new Silver Line stations will open to customers at noon, and the first Silver Line train will depart Wiehle-Reston East, bound for Largo Town Center.