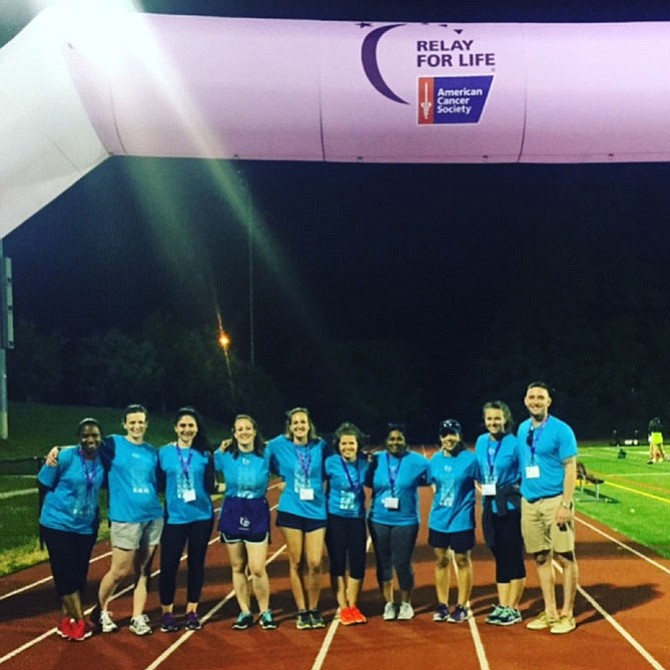 The volunteers of the 2017 Relay Planning Board 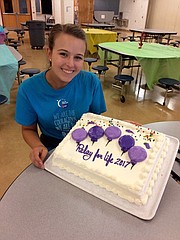 senior year when they’ve been accepted to colleges – when the hard decisions about their immediate futures are in the rear view. Unfortunately for Heidi Smith, that exciting and carefree half of her senior year at West Potomac High School never happened.

One day, just as with so many high school seniors, Smith was weighing the pros and cons of attending the colleges to which she’d been accepted. And the next, she was diagnosed with Hodgkin’s Lymphoma — cancer of the lymph nodes that would require six months of chemotherapy.

Now, almost five years later, it’s only a matter of days until Smith will be five years cancer-free. Even after all these years of continued health, Smith said that she’s come to realize that there really is no such thing as a clear-cut victory over cancer.

“When you go through treatments at 18 years old, it’s hard to understand what you’re really experiencing,” said Smith, a 2016 graduate of James Madison University. “All your friends are graduating, celebrating, going to Beach Week. For me, everything stopped so that I could start chemotherapy right away. I was diagnosed right before Winter Break and then I never went back to school; my teachers would come to my house. You really find out who your friends are. So many of mine disappeared. Every normal part of my life just changed.”

Smith’s last day of treatment in 2012 was also her first day as a college student. Medically speaking, Smith was out of the woods. However, she still couldn’t just slide into the typical social rhythms of college life. So, instead of seeking out the most notorious parties on campus or pursuing Greek life, she sought out the community of JMU students who organized the school’s annual Relay For Life, which is a signature American Cancer Society (ACS) fundraising event.

ACS Relays For Life are community-based battles against cancer that occur at different times and in different locations all over the world. Participants raise funds for a significant period leading up to Relay day, when everyone walks around a designated path, often a track, for hours. For example, this year’s Relay for Life of Beltway in Falls Church – which Smith also helped plan – was a 12-hour walk that raised more than $100,000 for the American Cancer Society.

Smith’s college involvement with an organization dedicated to eradicating cancer enabled her to discover her own identity outside of cancer. By the end of her college career, after devoting countless hours planning JMU Relay For Life, she found that she possessed strength completely separate from her own victory over cancer.

“In general, Relay For Life was very therapeutic for me at JMU,” Smith said. “It was a crucial part of me processing what I’d gone through, and coming to terms with my identity as a survivor. I just didn’t have the same college experience as every other girl for my first year-and-a-half in college. When I found the Relay For Life community, it helped me become the person I am. As a whole, the event itself is incredible but the process of planning for it and fundraising is probably what healed me the most.”

Every year, Relay For Life globally raise tens of millions of dollars for cancer research and other ACS programs that help cancer patients on their road to recovery. With more than than 5,000 communities all over the world hosting their own Relay For Life walks every year, the ACS website classifies this community-based event as its largest fundraiser.

As for Smith, college graduation didn’t mean moving away from Relay For Life. Coming full circle, the same month she graduated, she joined the Event Leadership Team (ELT) for the Relay for Life of the Beltway. She found herself on the planning committee for her childhood community’s annual fundraising walk for the disease that not so long ago threatened her ability to ever “leave the nest” of her hometown.

Relays For Life are designed for localized groups – of varying sizes and populations – to join forces and devote a day to the fight against all forms of cancer.

Each participant is on a team, which fundraises collectively and also walks together on Relay day. ACS’s concept is that at least one representative from each team is always on their feet for the cause. For the Beltway walkers taking a break from the George Mason High School track, there was live entertainment and other activities designed to fuel fellowship.

“Our event is a 12-hour community-driven event that helps raise awareness for the fight against cancer,” said Leah Nolan, the ACS community development director for the Northeast Region. “We come together as a community for one day in the hopes to celebrate our cancer survivors, remember all those we have lost, and fight back against a disease that has already taken too much. This event has become a cornerstone in the Falls Church community, with teams representing a wide variety of businesses, civic groups, religious organizations, and much, much more.”

In reality, any Relay For Life encompasses more than one day. With a six-figure fundraising goal, the 2017 Relay For Life of Beltway planning committee spent 10 months organizing local fundraising events and working with corporate sponsors. It takes a lot of manpower and volunteer hours to secure this magnitude of funding, all while planning for the actual Relay – which turns out to be a memorable daylong culmination of the entire fundraising, cancer-fighting season.

“As a whole, the event itself is incredible, but it’s the entire process of planning for it and fundraising is so meaningful,” Smith said. “Knowing that the money is going not only to research, but to services that make all the difference people currently battling cancer. It all came together incredibly this year under Leah Nolan’s leadership and with all the volunteers’ hard, hard work.”

The very first Relay For Life in Northern Virginia was in 1994, but it has since grown and splintered off into an array of community Relays.

“Over time, our passion spread among communities throughout the Northern Virginia area with the Falls Church Relay For Life beginning in 2007,” Nolan said. “We’ve evolved over the years to add many more members of the community. The walk typically takes place in the spring of every year, and our community of volunteers really looks forward to it works hard to fundraise in the months leading up to the actual walk event.”

In her role with ACS, Nolan managed and organized the volunteer planning committee for the Relay For Life of Beltway. Recruiting Smith to the ELT was a no-brainer for Nolan, as the two young women became friends through JMU’s many successful Relays For Life.

Although Nolan has called 2016-2017 a “rebuilding” year, the 2017 Relay For Life of Beltway has so far raised nearly $105,000 for ACS. They set their initial goal at $140,000, which they can still meet. The fundraising period of each Relay for Life is an entire year, and the Beltway community’s deadline for donations on behalf of their 2017 event is not until Aug. 31.

Smith said that she will remain involved with Relay For Life for at least her foreseeable future. As the Beltway’s Relay For Life expands, Smith will proceed with her own personal growth.

“My experience with Relay For Life of Beltway was the perfect combination of what I needed as I took a step into a new part of my life,” Smith said. “When I was at JMU, it was more about me, and what I needed to overcome. In a lot of ways I felt like it was a personal celebration. Weirdly enough, I wasn’t as introspective as I normally am. This year, I focused more on other people — other survivors and other people still going through treatment. I just really wanted to be a volunteer and give back to other people.”

To learn more about Relay For Life of Beltway, or to donate to its ongoing fundraising for the American Cancer Society, visit www.relayforlife.org/beltwayVA.