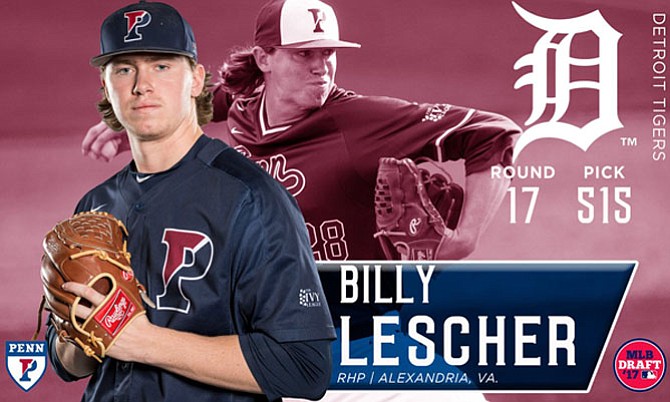 Billy Lescher, a 2014 West Potomac graduate, signed with the Detroit Tigers in late June after the club selected him in the 17th round of the 2017 Major League Baseball draft. Lescher would have been a senior this fall at the University of Pennsylvania, where he led the baseball team’s bullpen staff last spring with a 3.18 ERA, 16 appearances and four saves. Using his solidly built, 6-foot-four, 215-lb frame, Lescher can bring the heat.

“The scouts started coming to our games in the fall of 2016,” Lescher said. “They watched our games and talked with several of us” — Lescher was the first of four pitchers at Penn who were drafted this year — “and gave us questionnaires to fill out.” He turned to his parents, Ruth and Bill Lescher who live in Waynewood, for some of the required information. “I had no idea about the draft process,” Ruth Lescher told the Gazette, “so it was a learning period for all of us.”

Billy Lescher attended individual, pre-draft workouts with the Yankees, Rays, and Pirates, but, surprisingly, not the Tigers.

Once he was drafted, he didn’t ponder long on the decision to leave college for baseball. “I signed with the Tigers just a few days after I was drafted. My parents were 100 percent behind me because it’s a pretty cool opportunity.” Ruth Lesher echoed that thought, saying, “We were pleased with his decision. Billy told us that he firmly intends to ultimately earn his degree from Penn.”

Lescher is now playing rookie ball on the Tigers’ West squad in the Gulf Coast League. The team is based at Detroit’s spring training facility in Lakeland, Fla., east of Tampa. Lescher won for the first time on July 17, evening his record for the summer at 1-1 and keeping his ERA at 0.00. He has appeared in six games as of the 17th, tied for the most on the pitching staff.

At West Potomac High School, he earned second-team all-conference honors in baseball, as well as lettering two years in swimming and one year in diving. He also graduated with honors.