People at Work: From Bartender to Owner in a neighborhood institution.
Votes

People at Work: From Bartender to Owner in a neighborhood institution. 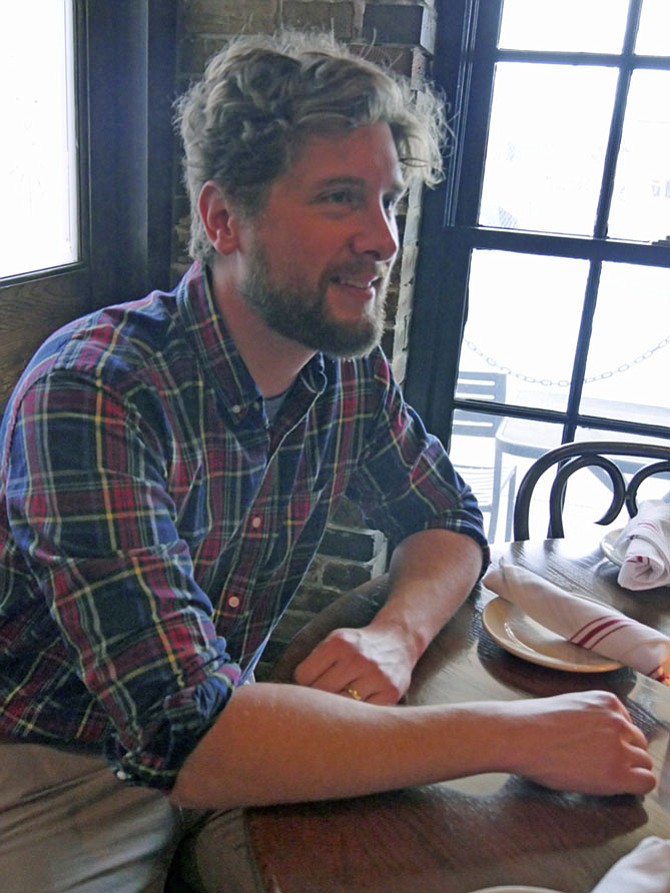 Trae Lamond started working at Chadwicks as a server in 2004 to get out of his parents' house after returning home after college. Now he owns the business with 50 employees. Photo by Shirley Ruhe. 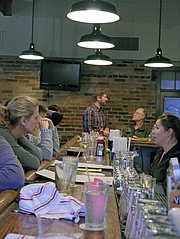 Ten stools of customers with a variety of beers line the upstairs bar as Trae Lamond chats with regulars eating dinner at the far end. 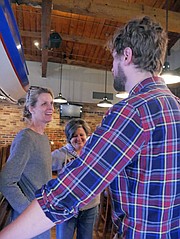 Two regular customers discuss the advantages of different beers with Trea Lamond, the owner of Chadwicks. They agree they would drink gluten-free beer if offered. 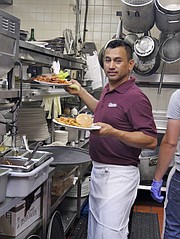 Daniel Aragon has been working at Chadwicks “for an eternity.” Owner Trae Lamond says he has busboys who have been working there since the ’80s and are working the same schedule. He’s says it’s a neighborhood institution.

Trea Lamond walks up and down the noisy bar with a handshake for the regulars at Chadwicks, a clap on the back and a greeting for new customers. Two men are there from the boats, others after work in the shops. Lamond has owned Chadwicks in Old Town since July 1, 2015 but he has been working there since 2004. "I was out of college and living at home, and I had to get out of the house so my friend found me a job here."

He said within a year he had been promoted to a bartender working five nights a week "making incredible money while learning about the business, eating free, meeting girls. It was a great gig." He said, "I picked up my wife here while she was working in the Torpedo Factory."

He explains, “You know what’s funny? When I was a kid I wanted to be an architect, but everyone told me it took too much math."

But he discovered, "You can make great money here as a bartender right out of college. For a while we were about the only one around and you could work from 6 p.m.-midnight and then double your money from midnight to 2 a.m. The industry crowd would drop $20 tips." But during this time he was also learning about the business and became manager and eventually owner. "One of the things I stress is communication with staff because when I worked here I saw we would run out of something on Monday night and no one knew it when we opened on Tuesday morning." He says he tries to make a list but before he can scratch one thing off, three more pop up and other things change.

Monday is half price burger night, and the burgers are flying out of the kitchen. They are hand-formed patties with high-quality beef. But they don't add a lot of extra ingredients. "It's not fine dining. We don't doll our stuff up." He stops to chat with Mike Schauer and Mary O'Donnell, who are perched at a small table in the bar. She lives just around the corner. "I have the burger with cheddar and an amber, and Mike orders the nachos because it's happy hour ... and his amber as always."

Lamond continues his rounds. "A lot of what I do is make sure people are comfortable. If I see someone not eating his or her meal, I always want to know why. A lot of times we can fix the issue on the spot. And it's important to remember people's names and faces. It all goes back to bartending."

Lamond has been there since morning when he does the paperwork. He balances the books, keeps track of yesterday's business, the trends, and what the competition is doing. For instance, if he sees someone has a new crab dip that everyone is buying, he may want to consider adding his own crab dip. Lamond says his chef has been working at Chadwicks off and on since high school. The chef never went to culinary school "but he works hard, doesn't leave a lot of waste and just knows what to do. And I have a couple of busboys who have worked here since the '80s. They still work the same schedule."

Lamond says the customer favorite is definitely the burger, and the crab cakes and ribs are huge crowd favorites. While he loves the burgers, too, "I eat here 6-10 times a week so I go healthy — the Greek salad with blackened salmon."

He continues the rounds walking up the wooden railed stairs to the upstairs bar. Lamond says they mostly don't serve "fru fru" cocktails. "We're really a beer bar." He runs into two women regulars. "How you doing? Haven't seen you for a while." A conversation unwinds about beer. "Would you drink gluten-free beer if I sold it?" Two heads nodded yes. Then they agree anything Belgium is good.

He heads for the kitchen and runs into Dannie loaded with two plates headed for the upstairs customers. "Dannie has been here for an eternity. His son just earned a 4.63 GPA. I hope my sons do that when they grow up." Lamond says the only thing about the job he doesn't like is when he sees a server skipping steps and he has to let him know.

"We've been an institution since the '90s. We're a consistent neighborhood place, not frilly." He says, "We can be having a birthday party for a 4-year old while the bar is noisy or grandma and grandpa can be eating during a rowdy happy hour. We're all things to all people."