Refugee Stories — Different But the Same

Learning to look at the long term. 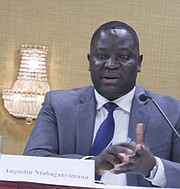 “They think when they get to America, everything will be OK.” — Nouf Bazaz

Augustin Ntabaganyimana came to America from Rwanda. He awoke one morning after the genocide to find them trying to kill his stepmother. “Life was not pretty.”

Jessi Calzado-Esponda woke up one night when she was 7-years-old to find her aunt secretly packing her bags to flee Cuba. In the blink of an eye Calzado-Esponda ended up on a raft with 16 other people and a dog. "I'd lost all my connections with no plan."

The panel of former refugees discussed their experiences resettling in this country at the Ethiopian Community Development Council's 23rd National Convention on June 1. Their program stated, "the conference comes at a crucial time for refugees, both abroad and domestically. The world refugee crisis continues to be one of the defining issues of our time."

Each refugee had a story.

Ntabaganyimana said after the Congo genocide he wasn't a target but his stepmother was. "I awoke one morning and they were trying to kill my stepmother and it went downhill." He said his father was middle class so each time they tried to kill his stepmother, his father gave them money. But the money could only last so long. They ended up in a refugee camp. "Living in a tent in the heat was terrible and going from three meals a day to two and finally to one. “When it was discovered that some families were harboring refugees he had to run away again and he ended up walking "I googled it later … I think about 1,000 miles. Many people died along the way."

After the second Congo War, he was heading toward the Zambian border, was caught again and imprisoned "just for being a refugee." But Ntabaganyimana had some luck because he interacted with an individual from the U.N. who convinced the authorities there was no cause to hold him. He still remembers the date. "I was released in Sept. 23, 1999.” He entered the U.S. as a refugee from Rwanda in 2000. Now he currently serves as acting director of grants management at the Maryland Department of Human Resources where he oversees the Office for Refugees and Asylees.

The panelists agreed about the generosity of the American people. Ntabaganyimana said the resettlement agency sent someone who spoke French to meet him at the airport. "I was surprised. I was wondering how I was going to make it with the language barrier and we'd learned that White people kill Black people." But he found Americans would offer help for anything. "We will help you learn to drive." They assisted him to enroll in college which was difficult because he didn't have his high school diploma. "You don't take it with you when you are running for your life." He said "People were really going out of their way."

Calzada-Esponda said she ended up in Miami "where we automatically had a community willing to show us the ropes, to explain things like Thanksgiving and why you eat turkey instead of pork." She said one of the biggest challenges is adapting to this country from Cuba because countries all do things differently. "My aunt was not able to assimilate as well as I was and committed suicide a year after she had come to the U.S.”

Calzada-Esponda said in 2012 she had a terrible car accident and suffered traumatic brain injury. "But this country has taught me you can overcome anything." Calzado-Esponda is currently CEO of Cuba Inspires and a former Capitol Hill staff member. She said, “We have to get out the success stories of the doctor who was a refugee, the lawyer who was a refugee and let people know that refugees aren't terrorists. "We have to change the world and that's that."

The program moderator moderator, Nouf Bazaz, asked what advice the panel would have for refugees having difficulty integrating into the community.

Ntabaganyimana said, “They have high expectations in the beginning. But they need to learn to think 2, 3,10 years down the road. Once they learn English and get to know the community, life gets better. Down the road they will have integrated.”

Calzada-Esponda advised, “Learn the language.” She remembered her first words were “mister, mister, give me candy,” to the soldiers. “Have patience as you are trying to get that job.” She said, "The more you try to fit into the community, the better it will be. "Figure out what makes you happy as an individual because in America there is a little bit of everything."

The moderator asked, "What is the one thing you would like the U.S. to know about being a refugee?”

Ntabaganyimana said, "The refugee program works. It saves lives. Without it I would be dead or forced to join rebel groups to survive."

Calzado-Esponda said, "America was built by refugees. This is not new. To deny this is to deny America."

The ECDC was established in 1983 as a non-profit organization with a mission to resettle refugees. Recently it was added as the third official resettlement agency, along with Catholic Charities and Lutheran Services, to serve the Northern Virginia area. ECDC specifically assists Special Immigrants from Iraq and Afghanistan. ECDC is headquartered in Arlington.

This is part of an ongoing series of articles focused on refugees and immigrants.

One of the sources in this story asked not to be included in the online version and has been removed at their request.