Remodeling a Home in Stages
Votes

Remodeling a Home in Stages

David Foster helps clients design in phases, and at their own pace. 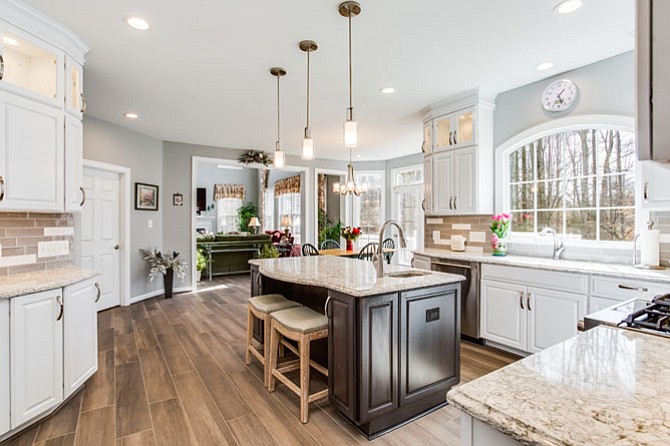 Dory Clemens at Foster Remodeling Solutions executed a kitchen upgrade in an 18-year-old Springfield home while staying within the footprint of the existing production house plan. To create light and visual continuum, a small casement window was replaced with a divided-light picture window. The food prep island and two-seat dining counter is positioned to support work triangles in three directions. Photo by Larry Golfer 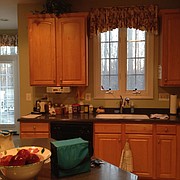 Foster Remodeling Solutions is a full-service remodeler and maintains a 3,270-square-foot design and selection showroom at its headquarters in Lorton. On Oct. 4, Dory Clemens will be leading a seminar in “Kitchen and Bath Design.” Call 703-550-1371 or visit www.fosterremodel....

Kevin and Priscilla Kelleher have occupied their 5,200-square-foot Springfield home since 1992 when they bought it new. At the time, the builder provided an array of finish work choices. The couple selected the Corian kitchen counter surfaces, a food preparation island of their preferred size and style. The flooring, cabinet-facings, window styles were all a testament to personal taste.

Situated on nearly an acre that backs into the woods, this is the spacious home where the couple raised two daughters who have subsequently fled the nest.

But 18 years is a long time to be regularly re-assessing the same floor plan, contemplating the same unyielding look.

“It was when the appliances started failing that we thought seriously about remodeling our kitchen,” said Kevin Kelleher who retired from the Army several years ago and now works in government. “My wife eventually decided she really didn't like the Corian countertops. There was a wasted space and dead corners; yet not enough storage. We also wanted more natural light, and better views of our pretty wooded setting.”

Of course, such observations typically describe the beginning of a process that entails much research, a regime of decisions. But, more importantly: where do you turn for ideas that will give definition and focus to a collage of emerging preferences, images and wish-lists?

It was easy for the Kellehers, who turned to David Foster.

Foster, president of Foster Remodeling Solutions in Lorton, had finished the Kellehers’ 1,500-square-foot basement in 2003. The positive experience had left the couple with the sense that they had found their “go to” guy for home improvements; better yet, Foster's process had actually gotten easier to implement in the intervening years.

“Fifteen years ago, we were offered sketches of designs for the lower level,” Kelleher said. “Today, Foster's designers model three dimensional space on CADD system software. This allows you to instantly assess different views of the room you're remodeling so you can clearly visualize how each perspective will affect the whole. It's a great tool for space planning.”

Which — combined with a wholly new interior design scheme — was exactly kind of the improvements the Kellehers were seeking.

In fact, the footprint of the kitchen, breakfast nook, family room, foyer and, even, the grand stairs at the entrance retain their existing measurements down to the centimeter. It's only the positioning of key components, their design, their storage capacity and their aesthetics that have changed — and dramatically.

“Inches really count when you’re renovating a kitchen floorplan,” said Dory Clemens, the Foster architect who designed the project. “This was largely about making better use of existing space while introducing a whole new interior design style.”

To create greater visual cohesion to first level living spaces, the wood flooring in the foyer and the white mosaic tiles in the kitchen were replaced with a wood grain porcelain tiling imported from Italy.

A comparatively new flooring material, the wood pattern is ink-jetted into the tile, offering the warmth of wood — but with much greater durability.

Meanwhile, ceilings and cabinet facings are bright white; the wall — a color that West Pointer Kelleher describes as “Cadet Grey.” Throughout the play of lights and darks is further developed — like a three-dimensional checkerboard.

The island base is a resonant walnut-color; the quartz surfaces are vanilla-hued Cambria Berwin finished with an OGE edge.

In the foyer the game of contrast continues. The staircase balustrade and all risers and treads are bright white, but there are now black iron spindles in place of their wooden predecessors.

Since the staircase and living room rise two levels, the Kellehers wanted to reduce the monotonous crush of white walls disappearing up into a distant ceiling.

“We wanted more definition around the stairway, and in what one generally sees looking up in a big room.”

To this request, Clemens introduce a shadow box effect by adding white picture frame molding to walls that have been re-painted grey. While it's formality vaguely recalls 19th century decorum, it fundamentally provides a much better definition of the planes, angles and forms that tend to get washed-out in a solidly white wall treatment.

“It draws your eyes up,” said Kevin Kelleher, which makes the space feel more proportional and balanced.” He added: “Foster's lead carpenter, Brian, is really a master at this kind of detailing. It's hard to see how anyone else could have done as well.”