Taking Pride in the C&O Canal 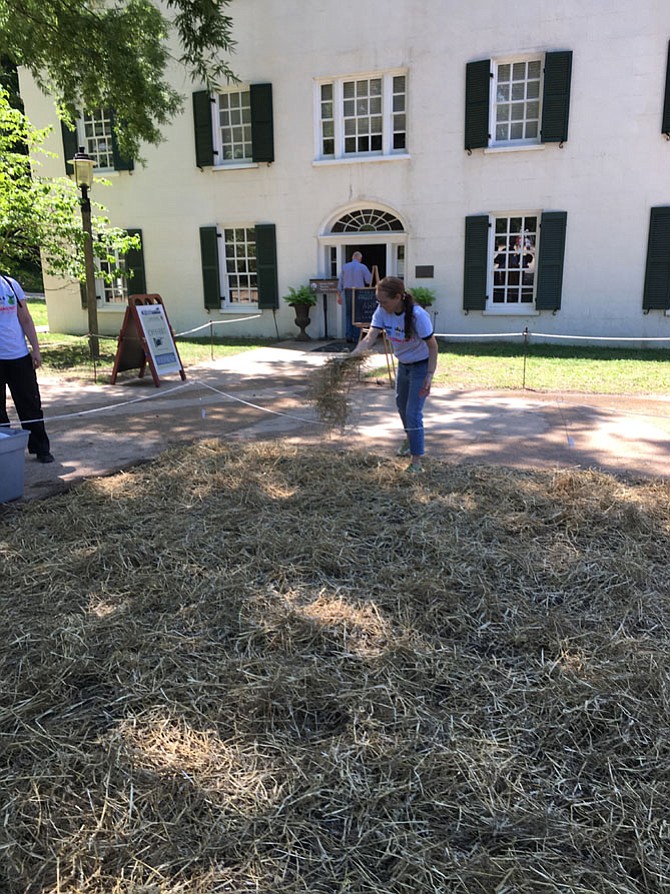 Robin Davitt spreads hay on new grass seed in front of Great Falls Tavern Saturday. She and others helped clean up around the Tavern during the 10th annual Canal Pride Day at C&O Canal National Historic Park. Photo by Peggy McEwan/The Almanac 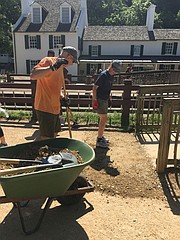 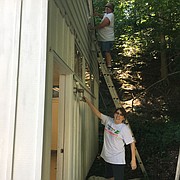 Lisa Belliveau, left, and Erik Blitte paint outside the bike loaner shed at Great Falls on Saturday. Blitte, who owns Tenleytown Painting in D.C., said he surveyed the project earlier in the week and brought his own ladders.

The C&O Canal at Great Falls got a major facelift Saturday, June 10, when more than a hundred volunteers joined together for the 10th Annual C&O Canal Pride Days.

After being cancelled twice this spring because of heavy rain, Saturday’s weather more than cooperated with a sunny clear day and low humidity.

“The weather is phenomenal,” said Becky Curtis, director of programs and partnerships for the C&O Canal trust which sponsors the Pride Day.

Curtis was signing in volunteers and sending them to different job stations along the canal and around the tavern.

Her list of things to do included cleaning and clearing the mule pasture and the trail the mules travel from their home on the hill above the tavern to the tow path where they pull the canal boat, filling in potholes along the towpath, painting the bike loaner program shed and the outside of the restrooms plus pulling invasive species around the tavern and planting grass seed where visitor shortcuts created dirt patches which easily turn into mud.

“The volunteer workforce here is phenomenal,” said Pete Petersen, supervisory manager of the C&O National Historical Park’s Palisades Area, which includes Great Falls. “We couldn’t get all this work done. [Members of] Friends of Great Falls Tavern are here today too, cleaning the tavern inside and out, making things sparkle.”

Hugh Robinson was up on a ladder painting the restrooms. He said he has been part of Pride Days since 2009 and volunteers in other ways too as a Canal Steward.

“I’m one of the people who maintains one of the lock houses,” he said. “I do Lock House 6.”

Potomac residents Anne Taylor and Rick Wymelonberg were on pothole patrol pushing a wheelbarrow full of dirt and small stones to fill holes along the towpath. Luke Nahin, a rising senior at Walter Johnson High School helped by tamping down the material so it would stay in place.

It was Nahin’s first time helping along the canal. He said he was doing it for Student Service Learning hours, but also because it was close and he was having fun.

Rick Servatius, who lives in D.C. was helping for the first time too. Between paint strokes at the bike shed, he said he bikes along the canal all the time.

Many of the volunteers Saturday repeated that sentiment and many had stories of walking, biking or fishing along the canal as children. Don Harrison, of Potomac, who is president of Friends of Great Falls Tavern said he came to the park often as a boy.

“My parents loved to walk the towpath,” he said.

He and his wife, Elizabeth Harrison, have taken part in almost all of the 10 Pride Days and were busy cleaning on Saturday.

“We love the place,” Don Harrison said. “Love the canal, love the tavern, love the outdoors.”