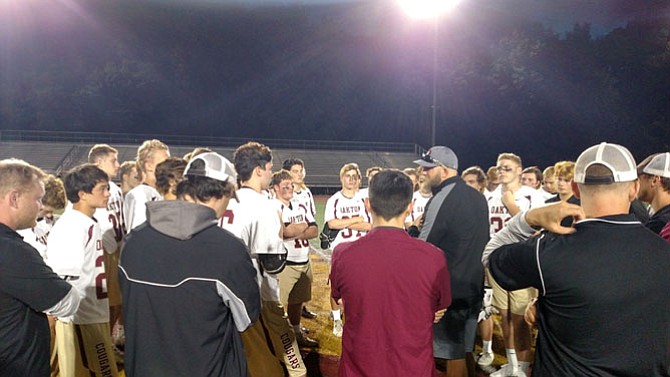 By By Thomas Kendziora

Vienna — One season ago, the Oakton boys’ lacrosse team struggled to a 6-9 record. A year later, the Cougars went 16-5, coming home with the Virginia 6A North Region championship.

However, the 2017 season came to an end Wednesday night, as South County put away the Cougars down the stretch in the state semifinals. In a game that entered the fourth quarter tied 7-7, the Stallions scored the last four goals to advance to Saturday’s state championship game with a 12-8 victory.

“It’s tough to beat a team that athletic and that talented twice,” said Jake Bullock, Oakton’s second-year head coach. “They did a good job. There were a couple key points of the game, like faceoffs and transition, that didn’t work very well with us, and they capitalized.”

The teams met in the regional tournament roughly two weeks earlier, with the Cougars coming away with a 13-11 win. Oakton captured that tournament with four close wins — three by two goals and the other by one. After a 2016 season filled with close losses, Oakton was able to turn the tide.

This game didn’t quite play out that way. The Cougars jumped out to a 3-1 lead at home, but South County responded by scoring four of the five goals in the second quarter and took a 5-4 lead into halftime. Oakton went on a run late in the third quarter to equalize the score again, and it was 8-8 in the middle of the fourth. But the Stallions pulled ahead with 7:52 remaining, then iced the game with three goals in the final 3:14.

After rolling out an extremely young team last season, Oakton had players who were ready for the moment this year. The attack was led by junior Jake Cole, who scored more than 60 goals, and sophomore Kevin McDaid, who led the team in points. Sophomore Aidan Ricci held his own in goal, and senior John Daido earned all-region honors as the anchor of the defense.

South County ultimately fell to Woodson in Saturday’s title game. The Stallions went on another fourth-quarter run with four straight goals, but this time they entered it trailing 10-4, and that was too much to overcome.

The state didn’t exactly have a dominant team this season. Woodson and South County matched 18-6 records, while the Cougars went 16-5. Robinson posted a 15-3 mark, but bowed out early in the postseason.

With most of its core coming back, Oakton is in an enviable position for 2018 and beyond.

“This is a group of guys that really turned this program around and have done fabulous things this year,” Bullock said. “The biggest thing is just that they understand that this is something to build on, now they understand what the atmosphere’s like and what it feels like to get on this level, and I think they want to do more of it.”