What To Know About the BID
Votes

What To Know About the BID

A primer on the Old Town Business Improvement District. 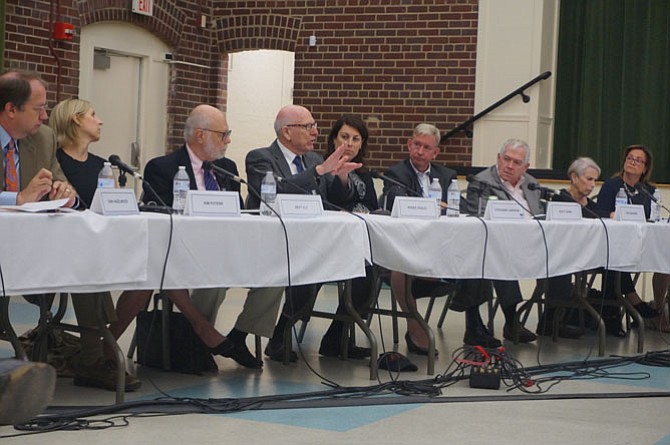 Alexandria businessman Rodger Digilio, fourth from left, expresses his concerns regarding the formation of an Old Town BID as part of a panel presentation to City Council June 6 at the Durant Center. Digilio was one of eight citizens selected by City Manager Mark Jinks to participate on the panel which included business owners both in support of and in opposition to a BID. Photo by Jeanne Theismann. 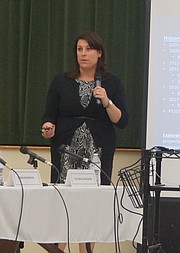 Stephanie Landrum, president and CEO of the Alexandria Economic Development Partnership, gives the opening presentation to City Council on the merits of forming an Old Town BID June 6 at the Durant Center.

Members of City Council listen to arguments both in support of and in opposition to the formation of an Old Town BID June 6 at the Durant Center.

The Old Town Business Improvement District is one of the most contentious discussions currently going on in Alexandria. Store owners along King Street and the surrounding streets have come out to public meetings and shown both support and opposition to the idea. Signs have been posted across the city on telephone poles and shop windows calling on Alexandrians to “Ban the BID.” It’s one of the discussions likely to shape the future of Old Town for years to come, and yet much of the conversation about the BID has circled around confusion over what it is, how it came to be, and where it will go from here. Before the City Council votes on the first stage of BID development next Tuesday, here’s what one needs to know about the Old Town BID.

What is a BID?

A Business Improvement District, or BID, is defined as a nonprofit organization that gives public services within a specific area which exceeds what the government provides for that certain area. The idea of creating a BID has been recently brought to the surface in the past two years out of a need to manage the downtown and waterfront business areas. The objective of the BID would be to define a “core commercial district” according to Stephanie Landrum, president and CEO of Alexandria Economic Development Partnership, that would combine the waterfront, King Street, and the side streets into a single district that would help drive more consumer traffic. According to Landrum it would increase the property values, help attract retail businesses, and fill vacancies. This BID would act as one voice for the entire Old Town community within the BID’s new boundaries.

City Council would need to adopt a service district ordinance to authorize a specific BID proposal. The service district ordinance would set the boundaries for the BID and establish a purpose the the district, allowing a BID non-profit organization to move forward with more specific proposals regarding the funding and organization of the BID to be considered by the council at a later date. The proposed BID would be governed by a board of directors elected by commercial property owners and non-residential tenants in the district. The board would hire an executive director and submit an annual work plan and budget to the city.

Local businesses from the waterfront to the King Street Metro Station would be responsible for paying the tax imposed by the BID. This would exclude local residents unless they voluntarily opt into the BID in exchange for voting rights.

What will a BID do for businesses?

The BID was proposed to help local businesses compete with other retail areas and online retailers. The BID would receive the revenue of a 10 cent tax per $100 of assessed value that would go toward marketing/promotional programs, capital improvements, security, and beautification of the area. Many local businesses do not see the BID as an opportunity to increase sales, but as a potential last straw. Some have expressed that they might not be able to stay in business with yet another tax when they already have to pay property taxes and licensing fees. To stay afloat, many of the small businesses may have to increase their prices, which may end up pushing some customers away. The exact amount collected by the BID would be decided on if the BID moves forward.

What is the history of local BID development?

The current conversation over whether or not to form a BID started in summer of 2015. A subcommittee was formed in the Waterfront Commission to assess the idea of the BID and recommended approval in spring 2016. In May of last year, the City Council allocated funds to AEDP to work with business owners to put together a BID proposal. The group met over the last summer and started publicly meeting with the business community in October 2016.

What is the timeline for the BID moving forward?

On Saturday, June 24, the City Council will hear testimony from the public about the proposal to create a service district. The council will vote Tuesday, June 27, on whether or not to approve the service district. If the BID service district is approved, the non-profit BID organization will be created and a board will be appointed to run the non-profit. Throughout the summer and the rest of 2017, the board will develop a budget proposal. If the board proposes a budget, it would become part of the regular budget process. The budget would then be voted on during the first week of May 2018.

The current proposal recommends that the BID is approved for five years, but other districts throughout the D.C. area started with five-year spans and have been renewed indefinitely. According to Landrum, it is possible that the service district can be formed but no tax rate will be established to fund the BID.