In wake of attacks, community celebrates reopening of Simpson Field. 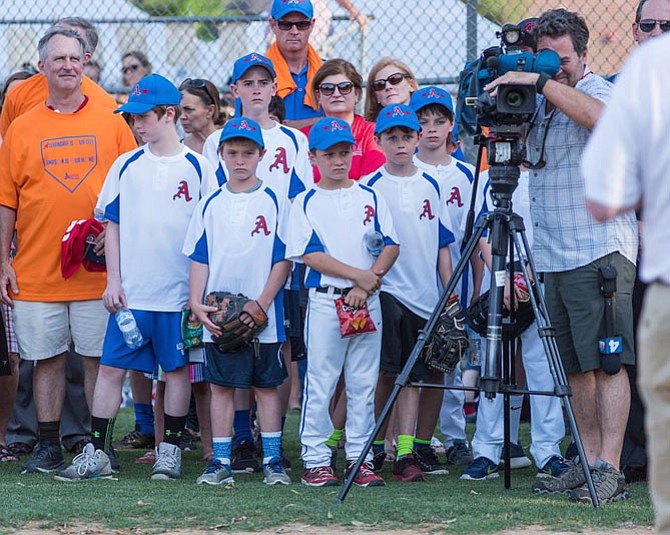 Alexandria Little League players listen to remarks prior to taking the field June 20 at Simpson Park.

“Our picture tonight in front of the Home of the Titans sign depicts the reality of the strong and vibrant community of Alexandria.”

Alexandria — “Our picture tonight in front of the Home of the Titans sign depicts the reality of the strong and vibrant community of Alexandria.”

Less than a week after a gunman attacked Republican congressmen practicing for a charity baseball game at Simpson Park in Del Ray, Alexandria Little League organized a community-wide “Take Back Simpson Park” event June 20 to celebrate the reopening of the field.

“I can’t tell you how it warms my heart to drive up and see people and Little League teams and families, and not crime-scene tape and the FBI and all the law enforcement,” said U.S. Rep Joe Barton (R-Texas), manager of the Republican team who was present during the June 14 attack at Eugene Simpson Stadium Park.

Barton recounted the events that left House Majority Whip Steve Scalise (R-La.) in critical condition and turned the field into a crime scene for several days. Mayor Allison Silberberg and

City officials, youth sports athletes, first responders and members of the Del Ray community gather for a photo June 20 as part of the Alexandria Little League Take Back Simpson Park event. The event was organized in the wake of the shooting attack on Republican congressmen that took place at the field June 14.

city officials also addressed the crowd, thanking the many first responders and community members who helped in the wake of the attacks.

Sporting jerseys and special t-shirts that read “Alexandria is our city, Simpson is our home,” athletes from across the city joined hundreds of residents and representatives from Alexandria Police, Fire/EMS and Sheriff’s Office in celebrating the reopening of the field with a group photo in front of the Big Simpson scoreboard.

“It was very important that we have this event for us as a community,” Chiarello said. “Last week the world saw an image of our field with police tape. Our picture tonight in front of the Home of the Titans sign depicts the reality of the strong and vibrant community of Alexandria.”