Heads cross-country for one final trip 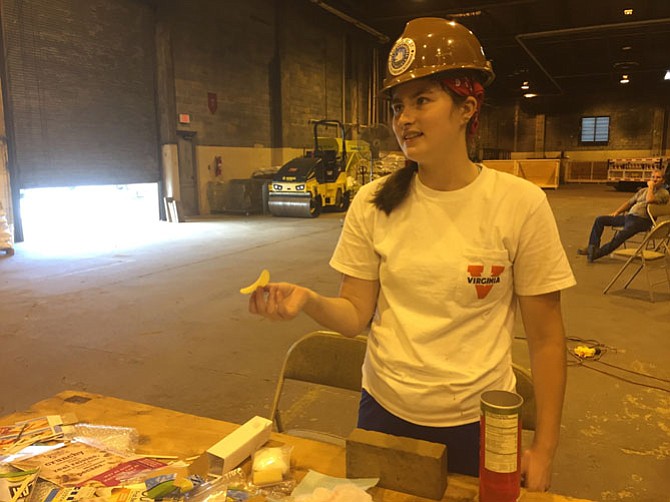 Addison Patrick, an intern with Alexandria Archeology, helps show visitors how difficult wrapping an artifact can be by having them wrap a Pringles chip to withstand the weight of a brick. Photo by Vernon Miles.

Timbers from the Alexandria ship are wrapped up and ready for shipping.

Over two centuries after it was buried in the mud under Prince Street, the Alexandria ship has departed for a final round-trip voyage. Its destination is Texas A&M for preservation and historical analysis. Six years later, it will return to Alexandria for permanent display.

According to Peter Pennington, a volunteer at the farewell party on June 15, the main job for the preservationists at Texas A&M will be the slow process of extracting the water from the ship while allowing it to maintain its shape. Once all the water is pulled out of the ship’s timbers, it will be freeze dried to make sure the moisture is out and the integrity of the wood will hold.

Pennington says the ship’s preservation takes advantage of methods developed during the preservation of the Mary Rose, an English warship found in similar conditions. More iron was found in the body of the Alexandria ship than was originally expected, and Pennington says that alone adds a year onto the treatment as it means the ship must be treated more subtly.

While they do repairs, Pennington also said the archeologists will be working to discover more about the history of the ship. So far, dendrochronology has uncovered that the ship originated in the Boston area with wood cut in the mid-18th century. Insect remains found in the hull of the ship have indicated that it travelled to the Caribbean, likely hauling cargo before it was scuttled on Alexandria’s shore to be cut up for firewood.

“In my view, think of a Ford white van,” said Pennington. “It does jobs, carrying goods, and probably picked up work as it went along. Imagine your van is going on around 40 years and hits the odd thing here or there. This ship was almost certainly run aground intentionally and unintentionally. After 40 years it’s probably leaking like a sieve even with all the caulking you could do, and the owner finally said ‘to hell with it’ and the good citizenry of Alexandria chopped it up.”

Two hundred years later, Alexandrians are showing a little more care for the wooden beams of the ship. Local volunteers carefully soaked the timbers in water then wrapped them in layers of special material to preserve the structure during the roadtrip.

“Once we get them all to Texas next Thursday we’ll reverse everything from the last couple days,” said Peter Fix, Ph.D, with the Conservation Research Lab at Texas A&M. “We’ll get them into soaking water. We’re going to do a 3-D scan of each timber for documentation. As I’m going back through and documenting it piece by piece, I’m thinking like the carpenter. Thinking ‘why did you notch each piece and put it in this way?’”

Fix said the lab’s biggest focus is going to be on stewardship and care for the wood as they make it stable enough for display in a museum. The Alexandria ship will be paired with a smaller sister ship found under the World Trade Center in 2010 undergoing conservation efforts. Fix said it’s been a mad house getting the ship broken apart for storage and loading into the trucks, but thanked volunteers and the City of Alexandria for helping to get the ship ready for this final voyage.