Jeremiah Davis named one of 19 football leaders from 15 states in USA Football's Heads Up Football Program. 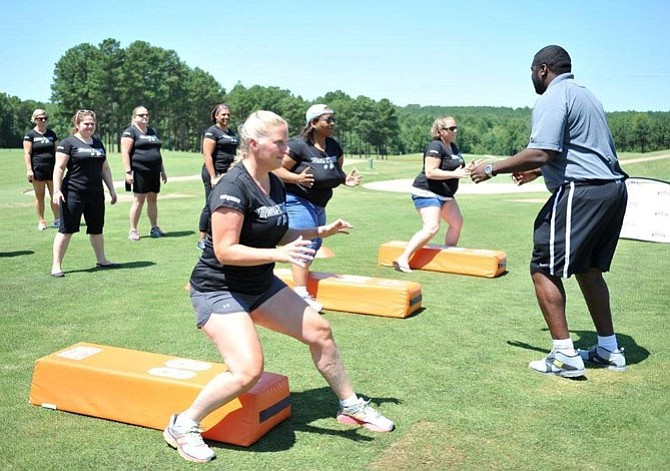 Jeremiah Davis, 34, the head football coach at Herndon High School, was named one of 19 football leaders from 15 states who was selected to be a Master Trainer within USA Football's Heads Up Football Program.

A South Riding resident, Davis joins a group of more than 100 individuals – including five women – who have been selected to educate football programs nationwide on Heads Up Football since 2013. In this role, he will instruct youth and high school coaches in the region on the medically-endorsed program, which comprises highest national coaching standards.

The group – which includes youth, high school and college football coaches, as well as former NFL players – participated in a workshop earlier this year that educated them on the core fundamentals of the Heads Up Football program. There are 2,200 high schools across the U.S. enrolled in the program.

"It's a national initiative to help make our game safer, using a singular terminology for youth to high school sports," said Davis. "It's about teaching correct tackling, heat and hydration safety, concussion recognition and response, how to deal with sudden cardiac arrest, and general practice guidelines to help coaches get better."

According to Scott Hallenbeck, USA Football CEO and Executive Director: “Master Trainers are leaders and educators, and work nationwide to implement important standards for parents, administrators, and coaches to ensure proper health and safety protocols are in place and to unify the approach to teaching football-specific techniques for the well-being of our athletes.”

“USA Football Master Trainers are leaders and educators who share in our commitment to advance the sport,” said Aaron Ingram, Senior Manager of the U.S. National Team. “We’re excited to add Coach Davis’ expertise and experience to our program.”

He said he got into the program through his former high school coach, Dick Adams, when he would attend as an Assistant Master Trainer. "It's been a real honor to work with my high school coach," he said. "It's also good to meet different people around the country and share our passion for the game of football."

DAVIS SAID THE TECHNIQUES he's learned are part of what he does every day now. "You've got to practice what you preach," he said. "All of our coaches are certified through USA Football."

The good thing about the program is that he helps train more coaches in the area, so the youth coaches are hearing the same terminology and teaching techniques all the way from youth football through high school. "So it gives you a common ground when you're starting the season," he said.

Last year, Herndon's football team was in a tough district, finishing the season 1-9, and experiencing a lot of growing pains. This coming year, it will be switching to a new district and playing new schools, including Washington-Lee, Yorktown, Langley, McLean, and Marshall.

"We have a strong core of returners on the offensive line, including Jaden Snead, a returning running back, who was the second leading rusher. He'll be a junior," he said. "Our defense will be held by Josh Harris; he'll be one of our leaders in the defensive line and he'll be a senior."