Preparing Students for a Fluid World 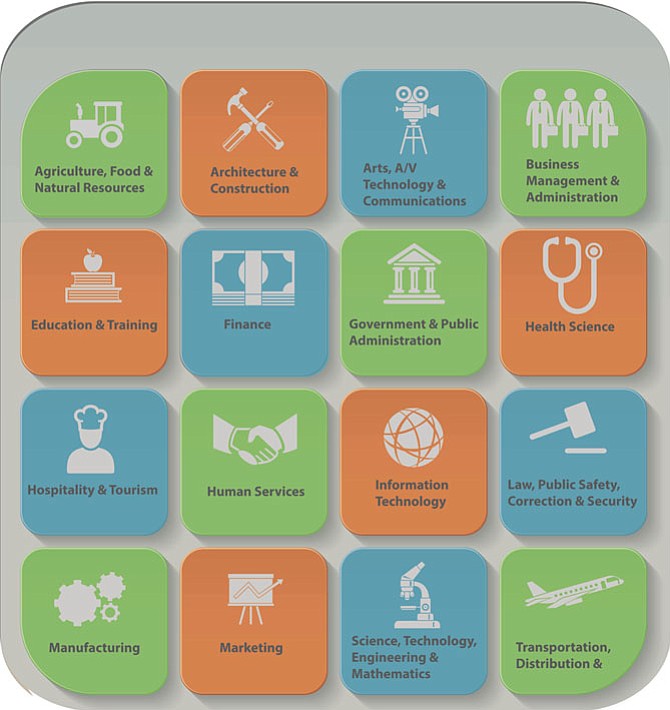 Alexandria — Through vocation-oriented, real-world experiences in the public schools’ Career and Technical

Education (CTE) program, students prepare for the world of work and higher education.

Rubaiyat Rhidoy, a 2016 T.C. Williams graduate, exemplifies how CTE can work. He took CTE courses beginning sophomore year, following an interest that he’d had since the age of 12. During high school he also worked as a freelance videographer. As a senior, he and two classmates earned an award from C-SPAN for a short documentary they created.

Following a teacher’s recommendation, Rhidoy interned as a senior at Reingold, Inc., a local communications and marketing company. That led to a longer internship after graduation and ultimately to his current part time job. Rhidoy has also attended Northern Virginia Community College (NOVA), adding to the college credits he earned while in high school. He intends to transfer to George Mason University, where he will study film. After that, he wants to work at Reingold full time. He says he’s especially grateful for mentorship from his CTE instructors and his job supervisor, who also oversaw his senior internship.

Day’Quon Henderson, who just graduated, is another success story. He started “coding” as a freshman. As a capstone project for a sophomore STEM class, he and two classmates, in collaboration with a nonprofit, created an app called Worducation that helps youths with developmentally disabilities to learn through word-and-picture matching. As a junior, in a CTE entrepreneurship course, he created a business plan for the app. As a senior he took his plan to a national competition, where he earned a top award. The app is available online through Google Play.

Henderson says a next step is to expand the app’s compatibility and availability. He will attend Atlanta’s Morehouse College, to which his application included a link to the app. He intends to study business and marketing and one day to work at Google.

THE CENTRAL pillars of CTE are career applicability and hands-on experience.

“So often [education models] stop just with the coursework,” said Terri Mozingo, ACPS’ chief academic officer. “But students really need to know, what are the various occupations that line up with those different courses?”

Starting in sixth grade, students build personalized programs of study, called Individual Career and Academic Plans, intended to guide their coursework through high school graduation. This process involves selecting, based on interests, a “career cluster” and “career pathway.” These terms derive from the National Career Clusters Framework, a program developed by Advance CTE, a national association.

“A Career Cluster is a grouping of occupations and broad industries based on commonalities. Within each career cluster, there are multiple career pathways that represent a common set of skills and knowledge, both academic and technical, necessary to pursue a full range of career opportunities within that pathway,” according to the Virginia Department of Education.

CTE students might be “completers” or “samplers,” said Chapman. Completers finish the requisite sequence of courses for a given pathway, whereas samplers jump around. Completers enjoy a lot of flexibility upon graduation: they can go straight into the workforce, college, or both. By earning college credits in high school, they can cut down on time and money spent in college. CTE “makes it economically feasible for a lot of our families,” said Helen Lloyd, ACPS’s communications director.

ACPS checks in with completers one year after high school graduation. Of the 2015 graduates captured in the 2016 survey, 94 percent went to community or four-year colleges; 4 percent joined the military; and 2 percent got full-time jobs. Seventy-four percent said that what they’re doing “somewhat” or “closely” relates to their CTE program of study.

“Brain research tells us that experience is essential for learning. … You’re not a passive receiver of information,” said Brown.

CTE students partake in a variety of “work-based learning,” including internships and apprenticeships. These can involve money and work product. For example, CTE students run the high school store and build content for ACPS-TV, a local cable channel. Numerous businesses and institutions have provided work-based learning experiences. Examples include Inova Alexandria Hospital; the Tiny Titan Child Development Center; Agenda:Alexandria, a nonprofit; the U.S. Securities and Exchange Commission; and ACPS’s own administrative departments.

“The purpose of education is to produce lifelong learners, ethical citizens, and kids who are ready for the world of work,” said Brown, paraphrasing American philosopher and educator John Dewey. “That’s what I think is the essence of CTE. … It’s really the whole student prepared for a world that is constantly in flux right now.”