Standing Together Against Hate
Votes

Standing Together Against Hate 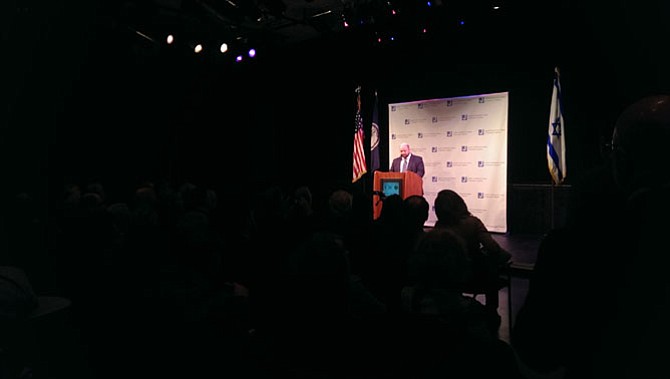 Students at Gesher Jewish Day School in Fairfax started their week with a bomb threat. The call came in Monday morning, Feb. 27, the head of school Dan Finkel said. Photo by Tim Peterson. 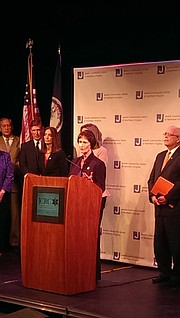 A host of elected officials, faith and community leaders stood together to condemn not just the Monday bomb threat and recent crimes against the Jewish community, but all acts of hate and intolerance. 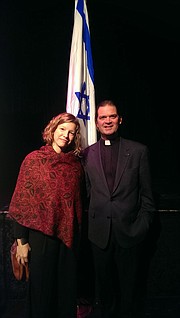 Students at Gesher Jewish Day School in Fairfax started their week with a bomb threat. The call came in Monday morning, Feb. 27, the head of school Dan Finkel said. Nearly 100 similar threats have been received at Jewish community centers and schools nationwide, amid recent instances Jewish cemeteries being vandalized and desecrated.

Finkel said the morning was scary, but that the school received rapid response from the FBI and local law enforcement.

“The ensuing moments were filled with love and support,” he said, allowing them to more quickly get back to the primary goal of providing “outstanding education for Jewish children across northern Virginia.”

Jewish Community Center of Northern Virginia executive director Jeff Dannick said in response to the crimes of hate, there’s a question of whether to be outwardly strong or keep a low profile.

“History has taught us always stand up against hate,” he said. “There was a time when Jews did hide in fear, we’ll not do that again.”

Dannick and Finkel were joined by a host of elected officials, faith and community leaders standing together to condemn not just the Monday bomb threat and recent crimes against the Jewish community, but all acts of hate and intolerance.

Attorney General Mark Herring said the amount of hate crimes being committed is rising in Virginia and around the nation.

“There is something deeply wrong in our national climate, that individuals feel empowered to take action against houses of worship, against children,” Herring said. No matter what you look like, where you’re from, or how you pray, he continued, “You have a place in Virginia.”

U.S. Rep. Gerry Connolly (D-11) said the 2016 Presidential election represented a sliding back in the history of America. As a consequence hate groups are feeling emboldened, he said.

Support, inclusion, opportunity and acceptance are basic American values, Connolly continued, which “can only grow because of these incidents.”

U.S. Rep. Barbara Comstock (R-10) brought up the prevalence of the Internet in helping hate groups organize and radicalize members online. She called for providing solutions to that connectivity through law enforcement, as well as parents understanding how dangerous the web can be for impressionable children.

U.S. Rep. Don Beyer (D-8) called anti-semitism “a scourge on the human community,” and encouraged people to “respect, lift up, love the Jewish friends and neighbors we have.”

The politicians also used their speaking out to call out President Trump for a response.

State Senate Minority Leader Dick Saslaw (D-35) echoed Connolly saying that the 2016 campaign “emboldened virtually every bigot in this country.” And that it didn’t help with Trump encouraging supporters to violently remove protesters from his rallies offering to pay their legal expenses.

The Rev. Scott Sammler-Michael of Accotink Unitarian Universalist Church in Burke shared a message after the conference that he has been spreading in synagogues, mosques, his own congregation, and anyone else: embodied faith. “Take steps into the world,” to counteract hate, he encourages. “Take your time, your talents, your treasure.”

To the Jews and Muslims and others who have felt targeted, Sammler-Michael said he’s told them, “we will stand where you need us,” whether it’s behind in support, arm-in-arm, or in front, as a “holy defense line.”