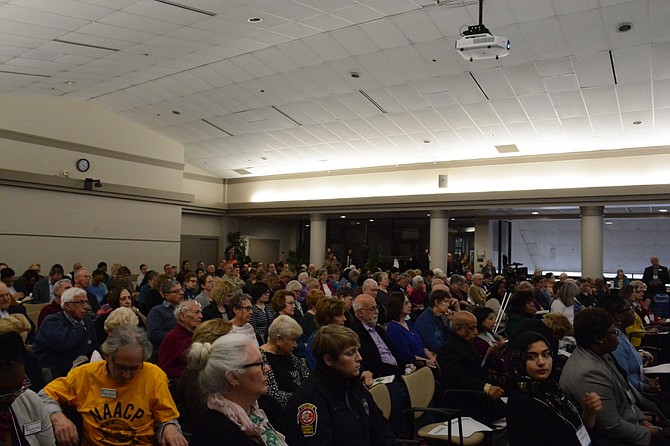 Fairfax County Chief of Police Edwin Roessler (right) said there were 83 hate “events” in the county last year, and 60 in 2015. Most of these, he said, involve graffiti and hate speech.

With a recent rise in hate crimes taking place across the country, Attorney General Mark Herring has addressed the issue at numerous events in Fairfax County already in 2017.

“There is a lot of fear out there,” Herring said. “I have felt it.”

Herring spoke about a web page he created for his website located at www.nohateva.com, dealing specifically with hate crimes: how are they defined, how to report one, what are resources for victims.

Herring’s page defines hate crimes as those “committed against a person or property motivated in whole or in part by an offender's bias against a race, religion, disability, sexual orientation, ethnicity, gender, or gender identity.”

Herring said he wanted every Virginian to know they have rights he is working to protect, and that professionals in his office are there to “defend, keep families safe and seek justice.”

Steven Gordon, Assistant U.S. Attorney, defined harassment in the context of civil rights and federal laws, and encouraged anyone to contact him directly with complaints regarding harassment they’ve seen or experienced.

“Many times you can do nothing about speech,” Arseni said, “Where does it cross the line?”

Speech becomes a hateful act, in the eyes of law he said, “when it shows serious intent to commit violence against another.”

Fairfax County Chief of Police Edwin Roessler said there were 83 hate “events” in the county last year, and 60 in 2015. Most of these, he said, involve graffiti and hate speech.

“Around the country, hate and bias are everywhere, including around this county,” Roessler said, “We will not tolerate this in Fairfax County.”

Roessler urged residents to engage with their local police districts; that FCPD representatives would come out to homeowners’ association meetings, to other local groups, to show they care, take responsibility and investigate any hate events.

Dr. Mary Ann Panarelli, Fairfax County Public Schools director for Intervention and Prevention Services, said building youth resiliency, helping them to believe in themselves, can prevent a variety of things, including hateful acts against one another.

Panarelli spoke about the importance of mentors in the community, that “every child needs to have an adult that cares and is trusting,” whether that be a teacher, parent, or community member who reaches out.

The program also included expressions of the Golden Rule from 10 different religions, including Bahá’ísm, Buddhism, Hinduism, Islam and Judaism.