Alexandria — Workmen's trucks jam the driveway, and a “Be Aware of the Dog” sign is 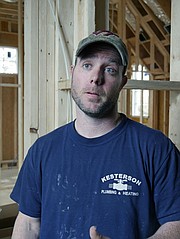 Pat Cronin, Rough End Manager for Kesterson Plumbing & Heating on Mt. Vernon Avenue, says the biggest challenge he faces is coordinating the schedule on 10 jobs so that everything runs smoothly.

tacked beside the front door frame. Pat Cronin, Rough End Manager for Kesterson Plumbing & Heating, says there is no real dog; I guess it's just a warning." Cronin has been working for about two weeks along with his crew on the plumbing in a large house addition on W. Braddock.

Cronin carries his ladder inside and walks up the newly constructed stairs. "Those red and blue pipes dangling on the wall are the pipes for the sink in the woman's closet. There is also a sink in the woman's bathroom and in the man's bathroom." He explains that every water line in this house is a home run. "This means there are no joints so we can isolate any fixture from the manifold (a maze of 12 hot water pipes and 16 cold water pipes) to repair it without shutting off the water in the whole house." The pipes in the house addition are pex piping or heavy rubber instead of the copper pipes in the attached original house. Cronin says they are less expensive and a little more flexible in cold weather. In the older part of the house someone shut

Pat Cronin says all the pipes in the addition on W. Braddock Street are home run, which means there are no joints. This means they can isolate any fixture from the manifold (shown here) and can repair a leak without turning off all of the water in the house.

off the copper pipes without draining them "so we repaired a lot of busted pipes."

Cronin walks downstairs to the main floor and points through the room framing. "This is going to be the kitchen area. There is a fireplace over there. It's going to be real nice." The house is full of activity as his workers share the space with carpenters measuring in the basement and electricians working on the main floor. He estimates the job will be in "rough in" stage in another week and ready for the dry wall and tile. "Then we'll come back and set all of the fixtures, trim out all of the showers and tubs."

On the top floor he walks through what will become the master bedroom. "It is this whole room and over there is the master bath," where he imagines the step down sunken shower with a trough-style drain that blends right in with the tile. "It's a new thing." Cronin says there are a number of changes since he started working for Kesterson 15 years ago. "There is always new stuff coming out. Sometimes we take classes, and we do a lot of research on the internet. It used to be just a regular tub or shower. Now," he says, "there are shower heads coming out of the ceiling, a lot of exposed fixtures, steam units." And he says materials have changed for sure with PVC piping, "although we still deal with a lot of galvanized piping."

Cronin says the energy factor has become significant in the last five years for electric and plumbing with the water heater now ”tankless.” He says the tankless water heater is just a box on the wall with a coil running around inside it. Water conservation is also important with low flush toilets going from 2.5 gallons to 1.6 and now 1.2. A loud noise reverberates through the floor. "That is one of my technicians downstairs strapping up the pipes with an impact drill.”

Cronin says this was his first job that he "fell into" when he was good friends with the owner's stepson and they hired him as a helper. "I did odds and ends, clean up, various things as an apprentice.” Now Cronin says he is working on about ten jobs at a time, mostly residential in Alexandria and 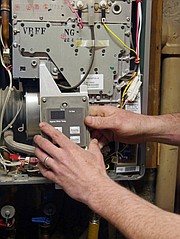 Pat Cronin has seen a lot of changes in his 15 years since he started working at Kesterson. He says due to interest in the energy factor, the “tankless” water heater has become popular.

north Arlington but including the Alexandria waterfront boathouse. It is a juggling act. The challenge is to get things to run smoothly. "I set up a schedule a week in advance with the contractors to coordinate so that we aren't in each other's way." He says he is on the phone constantly. "It is my biggest challenge trying to make everyone happy."

One of the most difficult tasks is remodeling the older homes in Old Town. "There are only so many options because of the space, and "you can't tell until you open them up a lot of times." The walls are plaster and harder to repair to make them look nice and preserve the historic elements. But Cronin takes pride in starting from scratch and seeing a job through to the finish. "It's really cool."

People at Work is a weekly column focusing on the people in the community doing their jobs. Send suggestions to slrbc@aol.com.