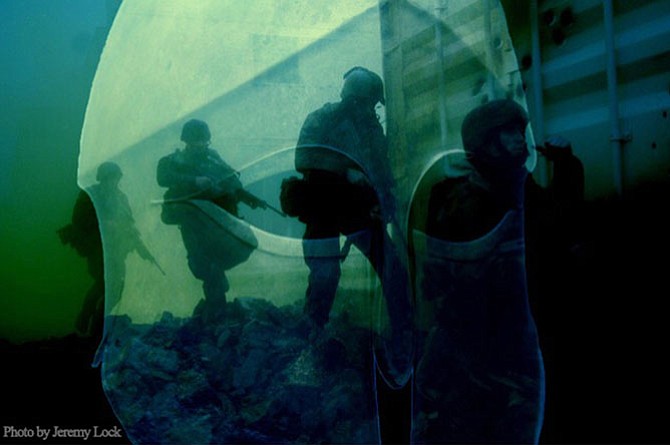 Cast of “Our Trojan War.”

narratives of contemporary times and modern war as the renowned Aquila Theatre brings “Our Trojan War” to the Alden.

“Our Trojan War” uses epic moments from Homer’s “Iliad” and scenes from other classical dramas and poetry to propel a moving chronicle of men and women at war. The production features American combat veterans who perform alongside Aquila company members. They are “The Warrior Chorus.”

Aquila’s “Warrior Chorus” is a National Endowment for the Humanities funded project. “The Chorus brings together men and women who served in the United States military and trains them to the highest level in the performing arts and humanities,” said Desiree Sanchez, artistic director, Aquila. The four member “Warrior Chorus” will join four professional actors on the Alden stage to perform.

“Because of their military service, veterans often understand classic Greek and Roman works at a very deep level based on their own experiences,” said Peter Meineck, founder, Aquila Theatre. “Perhaps this is because the ancient authors were all veterans themselves and using mythic material to articulate the tensions in their own society.”

“Veterans are great people to communicate important issues,” added Meineck. “They have demonstrated their commitment to their society by serving and often placing themselves at great personal risk and they are representatives of all of us, every gender, ethnicity and social group. They have earned the right to be heard.”

For Alden patrons attending “Our Trojan Wars” whether current service members, veterans or civilians, “I want them to feel they have experienced a compelling and exciting evening of live theatre…I would hope they might be provoked to think about democracy, leadership, ethics and power on a deeper level,” Meineck said.

In interviews with members of “The Warrior Chorus,” who have been in military service throughout the world from the Middle East, Korea, and Italy to name a few locations: James Stanton (USAF), Adrienne Brammer (USAF) and James Becton (USA) all agreed; they looked forward to a “lively, direct, unscripted conversation and engaging our audiences after the show.”