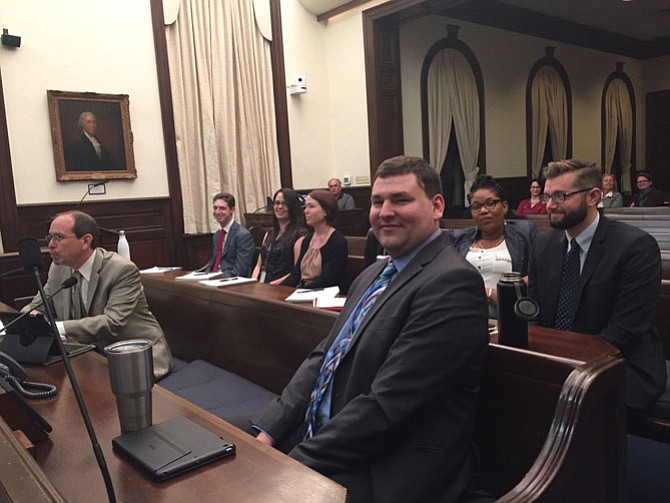 Alexandria — The budget process is over for the year, but the tense and often bitter

Truck seen driving around Old Town before the City Council’s vote on the budget.

disagreements on the dais have revealed some deep cracks in the city’s leadership.

In a 6-1 vote on May 4, the City Council approved the FY 2018 budget. The vote pushed Alexandria’s tax rate up 5.7 cents, from $1.073 to $1.13 per $100 of assessed value. The original budget proposed by City Manager Mark Jinks included a 2.7 cent increase to fund the rising cost of Metro and schools, but during the add/delete process the budget grew by 3 cents primarily to fund Alexandria Public Schools projects and affordable housing projects. With the increased sewage fees, the total cost tax increase for local residents will be closer to 8.9 cents. For the majority on the council, the new tax rate increase is essential to fund long-delayed infrastructure needs. But the final weeks of the budget process were mainly defined by a standoff between the council and Mayor Allison Silberberg, who said the tax rate increase was too much to put onto local citizens.

Silberberg proposed deferring/cutting three projects from the budget that didn’t have an immediate need to keep the tax rate at the city manager’s original proposal. The exact terminology of whether these were cuts or deferrals largely depended on who was being asked. Silberberg said the projects would be cut from the FY 2018 budget, but Vice Mayor Justin Wilson argued that pushing those projects into FY 2019 would only delay the tax rate increase and potentially increase the cost of those projects. Silberberg also argued that the original proposed budget had already included ample funding for schools and affordable housing, but the other members of the council said they believed the need to invest in city infrastructure justified the increase.

The battle over the budget is just the latest front in a long running conflict that has emerged between Silberberg and Wilson. Since the very first item Silberberg proposed, an ethics commission in January of 2016, Silberberg faced pushback from the other members of council. One of the main voices of opposition was Wilson, who said he found the proposed commission redundant. Eventually the commission passed at a City Council meeting in May 2016, but with significant revisions from the other council members objected to by Silberberg.

“I did want more ethics and transparency,” said Silberberg. “But it was a great start given the pushback. It was hostile.”

Over the next few months, the divisions between Silberberg and her fellow council members started to become more and more apparent. In February 2016, ARHA sought a rezoning and master plan amendment for their Ramsey Homes project, but asked for a deferral on the project’s special use permit. The vote required a supermajority, but both Silberberg and Councilman Paul Smedberg voted against it. However, three days later at a City Council meeting, Smedberg reversed his decision. The amendments had their supermajority, with Silberberg being the lone opposition. When Silberberg criticized City Attorney James Banks for not sharing that Smedberg was going to make a motion to rescind, Wilson questioned Silberberg’s leadership and “decency” for attacking a member of city staff in public.

In January 2017, Wilson put forward a proposal to limit the number of public speakers at the start of a public hearing to 12. All others would be pushed to the end of the meeting. Wilson said the shift was intended to benefit speakers on docketed items, but Silberberg attacked the proposal as draconian and arbitrary. In another 6-1 vote, the council supported Wilson.

The disagreements have ranged in nature from differences in general policy to sharp outbursts and insults. Most recently, Wilson scoffed at a comment made by Silberberg, drawing a quick back-and-forth between the two parties.

“It’s an interesting dynamic on the council. Watching the conversations gives a good insight on where the tension is,” said Wilson. “There is a tension there. That’s what makes this all interesting.”

And yet, Wilson said the while there is substantial conflict on the dais, it’s not as much as was predicted after Silberberg was elected. During Mayor William Euille’s term, Silberberg had often expressed similar disagreements over development issues.

“Certainly on some development issues, [we’ve] had a divide,” said Wilson. “I don’t think it’s as much as people predicted. Remember talking to [people] back in November that it would be constantly 6-1 votes. But when there’s a different viewpoint, it reflects that. That is not a new thing. There are two different visions. The six of us feel that we need to feel a chart a path forward.”

But Silberberg sees her election by the citizens as a mandate to protect Alexandria’s citizens and its historic character. Much of her campaign two years ago had centered around protecting residents from onerous development — along the waterfront in particular. For Silberberg, the battle over the budget has been another manifestation of this ongoing mission to protect the citizens of Alexandria.

“The people elected me for my judgment,” said Silberberg. “I believe strongly in the budget that Jinks put forward. This is too much.”

Frank Shafroth, director of the Center for State and Local Leadership at George Mason University, said the conflict is between addressing long-term challenges vs the desires of local citizens.

“What is going on here is the contrast between members with longer experience in the complexities of fashioning a budget process which attempts to address the city's short and long-term challenges versus the perception that voters want the best of everything--but do not want to pay higher fees or taxes,” said Shafroth. “So, in some sense, I believe the mayor is reflecting her perception of what our fellow citizens and taxpayers would wish for: the council is accepting the very hard choices of governance. I think the mayor, in some sense, believes she is representing the taxpayers … Any mayor would say citizens do not want to pay more taxes. Nor do they want to have cavities. Or potholes. Or traffic, etc. But, of course, they want good schools that are not overcrowded; they want safe neighborhoods; they want those roads plowed right away after it snows, etc. I think every taxpayer in Alexandria recognizes the taxes are a price one pays — it's just that they would like it if someone else paid.”