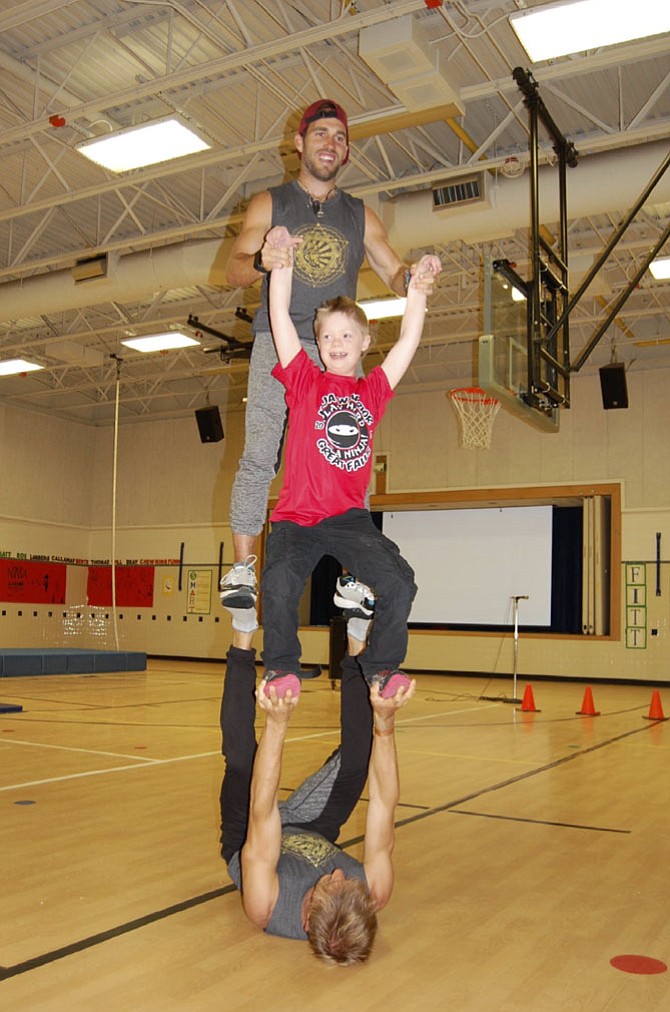 The Ninjas hold a Q & A with the students.

The children at Great Falls Elementary had an unusual day at school on May 2. Travis Brewer and Nicholas Coolridge, two stars of the television show “American Ninja Warrior,” spent the day showing off their acrobatic skills in multiple assemblies. Both “movement artists” are sponsored by premier health food company, Sunwarrior, on a nationwide tour to promote the benefits of healthy living and being active to students.

A fourth grader, Simon Killian, was celebrating his 10th birthday that day and got a special one-on-one experience with the ninja warriors. He had a huge smile on his face as they lifted him up in the air, and he enthusiastically showed them his tumbling skills on the mat.

Outside on the playground, the group joined an assembly of kindergartners and fourth graders, where Coolridge and Brewer climbed on the equipment and did gravity-defying tricks to the delight of the students and teachers.

Returning inside, a group of fourth graders lined up behind mats to learn tumbling techniques directly from the ninja warriors. One student, Cami Knight, shared her experience. “My family and I watch the show and I was a little nervous. My favorite part was when [Brewer] did a sideways handstand on the basketball hoop.” After performing many more tricks around the gym, the ninja warriors surprised the students by bringing kindergarten teacher, Sarah Newcomb, forward and demonstrating a trick she had secretly practiced with them.

The assembly ended with a Q&A session with the students. Coolridge, known as Modern Tarzan, told the students he still gets nervous when getting ready to perform but that doesn’t stop him. “Every time you try and fail, you’re going to get better.”

Both Coolridge and Brewer explained their childhood love of sports led them to their current career. Brewer said, “I tried every sport: football, soccer, lacrosse, and gymnastics. I always wanted to try something new.” They encouraged the students to eat well and stay active, sending them back to class with images of leaping athletes in their heads.

More information about Sunwarrior and the ninja warriors can be found at www.sunwarrior.com, www.moderntarzan.com, and www.travisbrewer.ninja.