Where the Bodies Are Buried in Old Town Alexandria
Votes

Where the Bodies Are Buried in Old Town Alexandria

From shipbuilding to townhomes in Robinson Terminal South. 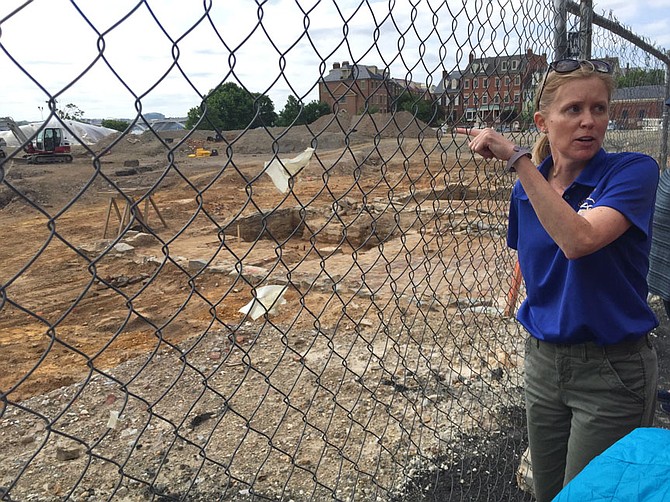 The remains of a lavatory at Robinson Terminal South.

There are bones under Robinson Terminal South. Human remains were found buried deep in the dirt, likely making it a dumping ground for the deceased who weren’t laid to rest in Alexandria’s historic cemeteries. It’s just one of the many stories layering the archeological dig through the site’s history.

On May 20, Dr. Eleanor Breen, an archeologist for the City of Alexandria, took a group of Old Town residents on a trip back to the early days of the site.

“It’s quite a rich and remarkable site,” said Breen, “It will keep researchers busy for years.”

Robinson Terminal South is located on what was once called Point Lumley, one of two points of the bay Alexandria was built around. In the mid 1700s, the site was common for ship building. In the 1780s, Alexandria was the fifth busiest port in the Americas. But despite the discover at the adjacent Hotel Indigo last year, Breen said discovery of ships or related artifacts would be unlikely at the site. No shipbuilding-related discoveries have been made at Robinson Terminal South. Breen described shipbuilding as an ephemeral trade, and the dirt conditions that preserved the wreck at the Hotel Indigo site were rather unique.

Throughout the late 1700s, the cliff that raised the Carlyle House and other historic buildings high above sea level was torn down to fill in the bay. Breen said the labor intensive work created 10 city blocks but injured many slaves in the process. Stones foundations are visible in the dirt at the site, the remains of buildings from the 1780s. Non-human bones found there led to the conclusion that the building was likely a kitchen. According to Breen, the human remains found at the site were most likely the remains of laborers who lived nearby.

As new waterfront continued to evolve, Robinson Terminal South became more industrial. Around the time of the Civil War, rail lines were laid through the site to transport steel. The original buildings at the site were heavily damaged by a fire that swept through Old Town in 1897. Breen said even the historic brick structure that remains standing on the site was likely destroyed and rebuilt at that time. Currently, Breen said archeologists are searching through records to identify the families and laborers that worked and lived at the site.

Now, as Robinson Terminal South is entering its latest phase of development as luxury townhomes, Breen said the city is continuing to work to preserve what they can area-by-area before construction sets in.

“The archeological work is ongoing,” said Breen. “It’s difficult to predict how long it will take, it’s being done in coordination with construction. We clear an area, and then the construction takes place.”

Some in attendance questioned the wisdom of allowing construction to continue at the site with discoveries like the boat at Hotel Indigo, but Breen said that the developers have been helpful rather than combative when it comes to preserving history on the waterfront.

“When you go into Hotel Indigo, they are keeping the history of that ship alive and well,” said Breen. “They’ve been offering a ‘Save Our Ship’ rate on some hotel rooms, with part of the proceeds going to the ships’ preservation. They were worried at first at the enormity of the discovery, but everyone worked together to keep that story going.”