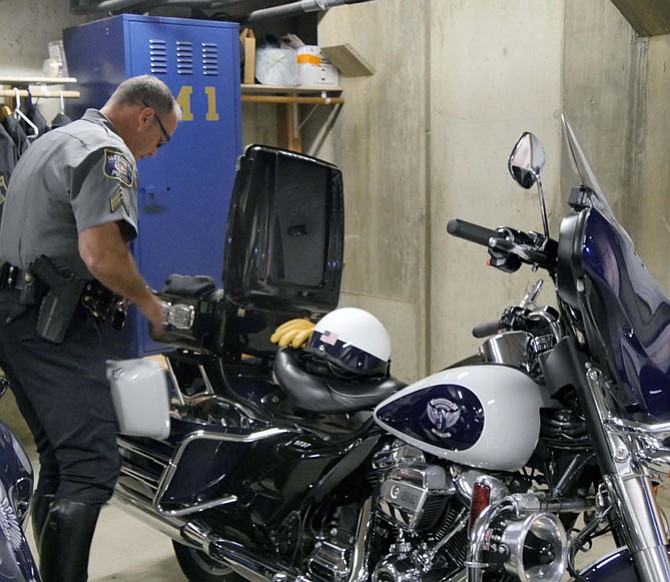 Sgt. Charles “Chuck” Seckler checks out his 950-pound Harley Davidson before heading out to major intersections where “we can’t ticket fast enough.” Photo by Shirley Ruhe. 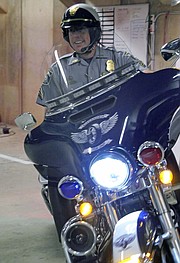 Sgt. Charles “Chuck” Seckler hops on his motorcycle in the motor pool and drives it out of the Alexandria Police Department on Wheeler Avenue where he will head to an early morning police escort.

motor bay and across the floor to where his 950-pound Harley Davidson Street Glide sits against the wall. It is heavy but "the size offers a little more safety." He explains part of their motorcycle training is practical. "You have to be able to pick up the motorcycle and also push it. The secret is leverage. But if you can't do it, you don't pass."

Seckler says the motorcycle size also handles the workload they do. "All the everyday stuff fits, such as the papers we need for court, the Virginia Uniform Summons (tickets), the winter jacket, extra gloves, leather gear if it gets really cold, rags to wipe it down, a computer, my traffic vest (lime green "apron") and the laser for tracking speeders." The police radio is built in.

A quick walk-around check of the motorcycle includes tire pressure and oil. Seckler takes the helmet off his seat, fastens the strap under his chin and puts on his leather gloves which are required "because our hands can get chewed up." The dashboard lights up as he pushes the ignition button and reaches 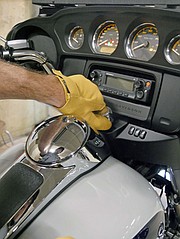 Sgt. Charles “Chuck” Seckler’s reflection bounces back in his mirror as he hits the ignition button on his motorcycle. His cycle is loaded with all of the heavy weather gear, extra supplies and documents that could be needed in a day’s work.

back behind his seat to turn on the radio.

Some days he heads for Gibbon or Patrick and Washington streets, two of the busiest intersections in Alexandria. "We can't write tickets fast enough for people who don't care what they do. We stand out in plain view with our lasers but people see what they expect to see which is a car. Everyone is in a hurry."

Seckler has been on the force 25 years with the last 4 years in the motorcycle section, and he says he thinks things are getting worse. He says, "sometimes we come back at night and we trade stories about who got the most outrageous excuse for breaking the law."

He says one of the biggest violations is failure to come to a complete stop at a stop sign. "They do in their own mind. They say 'I hit my brakes,' and I tell them 'but you didn't stop moving.’” He says they argue even if he has a picture. They refuse to believe it. People do what's good for them at the moment. "I had someone park outside the Starbucks on King Street and tell me they were just going to run in to pick up a cup of coffee. When he came out he had a ticket.” Seckler says the person was surprised. "He was gambling. I said 'you just rolled the dice.'"

Some days he is part of an escort for a funeral or for a dignitary. "There are certain criteria for who can get a police escort like when Obama signed the health care legislation at Northern Virginia Community College where Vice President Biden's wife was a teacher. "I was part of a 37-vehicle security escort. We secured an intersection." But he says every year visiting teams playing the Redskins ask for a police escort, and the answer is no.

Most of the escorts are for funerals "which is a courtesy for anyone who lives in the city." He explains unescorted funeral processions of 30-40 vehicles are a bigger safety hazard because people cut in the middle of the intersection between the cars. They are in such a hurry to get somewhere.

Sometimes Seckler is involved in "educational stuff at schools" or teaching crossing guards. There is a new program for adults called CarFit which teaches how to set up the car mirrors right, adjust seat belts, make sure everything is working like the tail lights which you can't see from inside the car.

Seckler has a list of locations which he rotates while also responding to complaints of someone who speeds by on the same street every day or parks in a no parking spot despite the warning signs.

Seckler is a supervisor so he works 8 a.m.-4 p.m. but his officers arrive at 6 am. So after he signs in when he arrives, he catches up with them on where they are and what they are doing and where he might be needed.

Seckler says this job is fun and rewarding. “And I like using the ticket to educate, to change people's behavior.” But it doesn’t always work. He had one young woman recently who got three successive tickets for illegally turning right at the same corner. She told him he was going to have to stop giving her tickets because it's breaking her bank. ”I told her then she needed to stop turning right at that corner."