Renting Out Homes Through the Net in Fairfax County
Votes

Renting Out Homes Through the Net in Fairfax County

Proposed zoning rules would allow residents to operate short-term lodging as an accessory use of a home. 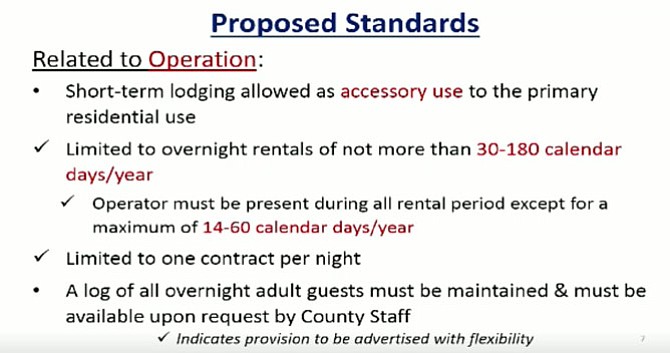 This chart shows a range of proposals for the zoning ordinance regarding short-term rentals. Fairfax County Planning and Zoning

Fairfax County is moving forward with a process to permit and limit short-term lodging like Airbnb and other platforms. This would regulate who can operate short-term lodging, impose limits on the operation and develop a permit process for seeking approval of short-term lodging as an accessory use to the occupancy of a dwelling.

The county’s Department of Zoning Ordinance process allows time to fine-tune additional language of short-term rentals; the county will advertise public hearings to give all residents an opportunity to voice opinion. The county conducted an online survey and have conducted several public meetings already, including last week’s public workshop at the Planning Commission.

“It will be next to impossible for condo associations and HOAs to amend documents if theirs do not already prohibit [short term rentals].” — Julie Strandlie, Mason District Planning Commissioner

Nick Ploutis developed his backup plan during tough economic times when fewer people contracted him to paint their houses.

“It has saved me,” said Ploutis of Springfield, a father of four who rented out his Alexandria property through a short-term rental platform. “Airbnb has helped me to pay my bills.”

Fairfax County Planning Commission held a workshop on Wednesday, Nov. 1 to address issues associated with allowing short-term rentals, such as who can operate lodging, the number of days permitted, whether homeowners or occupants must be present during the rental period, fees and necessary permitting for registering homes for short-term rentals, and if a log of overnight adult guests must be maintained and available to county staff.

“I think a lot of [short-term rentals] are flying under the radar,” said Dranesville District Commissioner John Ulfelder. “Technically, they are illegal right now.”

Currently, short-term lodging is not a permitted use under the existing Zoning Ordinance.

Laurie Arrants, of the Mason District, expressed comfort that the county will examine this new rental industry before rushing ahead: “Adding risk associated with lodging into the residential communities is a huge paradigm shift,” when local zoning code has protected residential areas from commercial activity, she said.

Right now, the county is considering limiting the number of nights in a range of 30 to 180 days annually; planners said they want the rentals clearly defined to be an accessory use, that the property’s primary use will still be somebody’s domicile.

Gail Henry of Fairfax asked why there would be a limit to the number of days residents could rent out home spaces. “I imagine there are many positives,” said Henry, referring to widowers, military members, people laid off or underemployed, or trying to remain in an expensive county.

She voiced concern over a negative undertone she sensed in the county’s initial discussions on the topic.

“No one on the commission is calling balls and strikes right now, we are simply asking questions,” said Murphy, during the public workshop on Wednesday, Nov. 1.

QUESTIONS CONCERNING parking, noise, and insurance liability dominated the queries from the planning commissioners to Department of Planning and Zoning staff during the two-hour meeting.

Liability insurance must be addressed, said Don Hinman, of Mount Vernon District, who spoke on behalf of the Fairfax County Federation of Citizens Associations. The federation advocates that homeowners (or residents) must be present when renting out for short-term rental.

He asked if inspections will be made, but county officials said they intend the responsibility to be placed on the homeowner or occupant hosting the short-term renter.

“If we’re approving a registry of these, maybe there’s some expectation in the public that somebody at some point has checked to make sure there’s a working smoke detector and that there’s a fire exit that meets code,” said Hart. “I hope that there’s not a false sense of security by us approving a registry for these, that yes, you can sleep overnight there … and we don’t know if it’s a firetrap or not.”

Lee District Commissioner James Migliaccio would like to see “a more draconian approach” taken with violators.

THE STRONGEST request came from Mason District Commissioner Julie Strandlie. She implored the county to conduct a survey of HOAs and condo associations.

“I think it is imperative that we do a survey to find out what our communities’ existing HOA and condo language says,” said Strandlie. “It will be next to impossible for condo associations and HOAs to amend documents if theirs do not already prohibit [short-term rentals].”

At-large Commissioner Tim Sargeant said he has concerns for small HOAs that might not have the resources to pursue legal costs should the need arise.

“We’re not precluding any HOA in any way from saying no?” asked Commissioner Hart.

“That is correct,” answered Lily Yegazi, senior assistant to the zoning administrator.