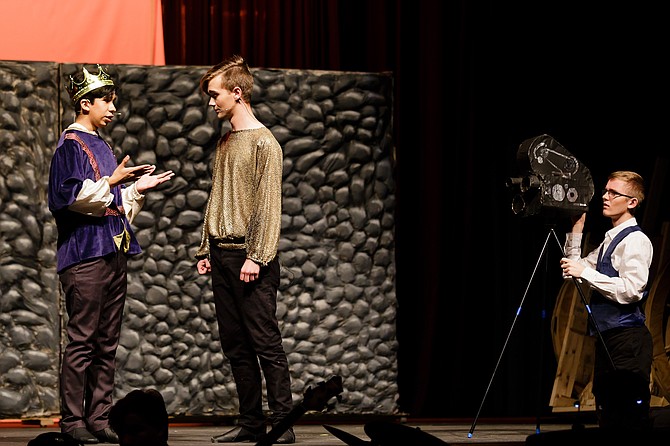 "Lights, Camera, Action!" The blinding lights of a movie studio flood the stage as the sleazy, jazzy Leading Players saunter on, joined by an ensemble of 1930s movie stars, all telling the tale of the son of Charlemagne, Prince Pippin. With a unique spin on the world-famous musical, W. T. Woodson's movie studio-themed “Pippin” has quite a lot of "Magic to Do."

Written by Stephen Schwartz, “Pippin” is one of the most unique and groundbreaking Broadway shows. Opening with mystery and intrigue, the Leading Players (typically one player, but in W. T. Woodson's “Pippin” the role is played by both Nick Dache and Sydney Cluff) draw the audience in, introducing the story of Pippin (Jack Hopewell), son of King Charles (Calvin Osorio). The show follows both the story of Prince Pippin and his unfulfilled life as well as the underlying plot of the players and actors themselves.

Typically performed in a circus theme, W. T. Woodson is breaking the mold with an unusual concept: movies. Centered around the 1930s and the golden age of film, this choice of theme transformed the leading players into movie directors, constantly observing and intervening. It also allowed for fascinating technical elements, such as movie cameras on stage, the usage of work lights to convey a stoppage in filming, and a studio box for the ensemble to sing in.

Central to both the plot and the strength of the performance was the title character himself, Pippin. Capturing the essence of Pippin's boyish nature, Hopewell dazzled with both his clear-cut characterization and his enchanting vocals, to transport the audience to another world with his hopeful take on the number, "Corner of the Sky."

Lurking in the background, the Leading Players brought a hint of foreshadowing to every scene, manipulating and leading Pippin around with ease. The pair's dynamic made the choice to cast the part in two actors an excellent one. The intention of the Leading Players in the plot became clear in the finale, when Pippin denied their offer to perform in a trick that would cause his demise. Nick Dache, the male Leading Player, allowed his character's composure to crack, erupting at Pippin and the ensemble with a fury that caught all off-guard.

Perfectly capturing the duality of the show's nature, Karlee Skaggs, playing Catherine, displayed two well-rounded characters: the actual character Catherine, a widow who takes Pippin in, and the actress playing her, who has genuine feelings for him. Her diverse range of emotions and skillful vocals were shown off in her "unplanned" number, "I Guess I'll Miss the Man," in which the Leading Players attempt to stop her from expressing her true feelings.

Setting the scene was a humongous castle, well-crafted and tall, which moved around the stage with relative ease. While underutilized, the set piece was nonetheless impressive, and it added incredible impact in the finale, when it was removed to symbolize Pippin's loss of acting and illusions of grandeur. The lighting was also notable, with diverse colors to represent individual characters and emotions.

Full of magic, wonder, and adventure, W. T. Woodson's “Pippin” is a joy from start to finish. There is "No Time at All" to waste, so catch “Pippin” before it's gone!