Musical includes the magic of the Follies, slapstick comedy, and charm. 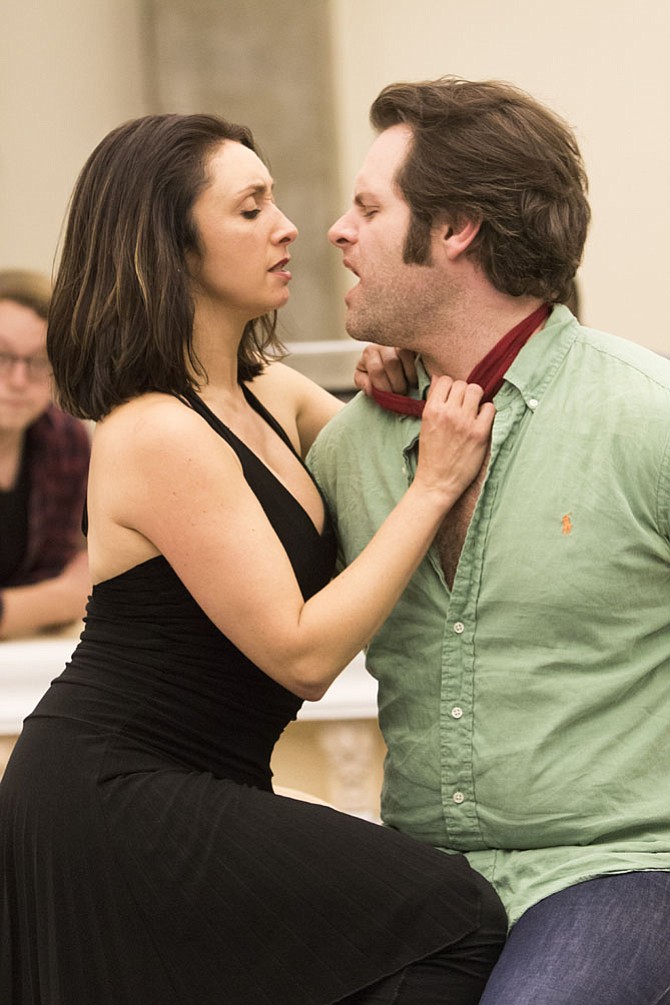 Natascia Diaz and Cole Burden in rehearsal for "Crazy for You" at Signature Theatre. Photo contributed

Signature Theater in Arlington is staging the romantic comedy musical, "Crazy for You," now through Jan. 14, 2018. The show is about a musical-loving banker who is sent to foreclose on a small-town theater but decides to revive it instead with the magic of the Follies, some slapstick comedy, and a lot of charm. Flush with mistaken identities, a love story and 1930s’ glamour, "Crazy for You" radiates with playful humor and high-energy show-stopping numbers. Some of the famous Gershwin tunes include: “I’ve Got Rhythm,” “Someone to Watch Over Me,” and “Nice Work If You Can Get It.”

With music by George Gershwin, lyrics by Ira Gershwin, and book by Ken Ludwig, the show won the 1992 Tony Award for Best Musical. In it, Cole Burden plays the role of Lank Hawkins, who is the proprietor of the Lank Hawkins Saloon and Hotel.

"He is unusually manic and is described in the script as 'blessed with a vision that no one else quite shares,'" said Burden. "He is the antagonist, I suppose. He truly believes he knows what is best for the town of Deadrock, Nevada ... and he has asked Polly (the leading lady) to marry him 15 times. "

He added, "He's quite human. He believes in his philosophy and he fights for it. He fights for it so hard that he can't see better opportunities right in front of him."

One of his favorite lines that really sums up his pig-headed vision is "Don't be stupid. Who would come to Nevada to gamble," he said.

He added, "We all know a Lank Hawkins. He is that visionary that never quite sees his vision come to fruition. He has opinions on everything under the sun but they are in fact just distractions that keep him from becoming a truly conscious being."

He believes that audience members who see "Crazy for You" will be thoroughly entertained. "I hope it will be a step back to a time when popular music was jazzy and complex, when lyrics were poetic and still deep and meaningful, when characters were so swept away by feeling that they just had to break out into a six-minute tap number."

He said the show transports the audience back to that stunning age of musical comedy that is so important to remember because it is historic but also "lifts us up, makes us laugh, and sends us home believing that there is joy in the simple things," he said.

In speaking for himself, he said he found it challenging at times to not play "funny." "I wanted to sort of inform the audience that I was trying to land a joke. It can feel like a wink-wink, nudge-nudge is the right solution to 'sell it' when, in fact, just looking at my scene partner and playing Lank's truth is what is going to be most relatable and hopefully the most funny."

He added, "I have not mastered this yet. Like all comedies, I am anxious to get our audiences. It is all for them, after all ...."