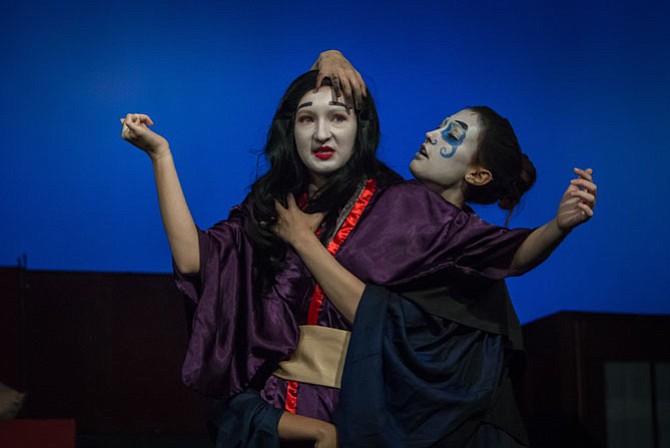 A scream pierces the night as a knife finds its target, the trembling fingers of the murderer now coated with fresh blood... The creative Japanese spin on Shakespeare's “Macbeth” enraptured the crowds Saturday night at Lake Braddock Secondary. The author, William Shakespeare, wrote “Macbeth” to show that ruthless ambition faces inevitable consequences. “Shogun Macbeth” stars J. Carlin Decker III as Macbeth, where he confidently fulfills the role of a man driven mad by murder and greed. Pronouncing each word with care, Decker puts his all into the role, bringing us to ancient Japan.

The lights open on a simple, symmetrical, and traditional set. The plot unravels as Macbeth is confronted by the three “Yojo” (a stunning performance by Erin Mullins, Gillian Church, and Natalie Hill) and they tell him a prophecy – that he will one day take the throne for his own. “Fujin” (Lady) Macbeth's (played by the endearing Emily Smith) greed and impatience overpower the uncertainty of Macbeth, and he commits the murder of the Shogun, washing the blood off his hands. Thus, Macbeth takes over the throne.

Overcome with greed, he orders the murder of anyone who poses a threat to his royal authority, including Banquo (Roger Clanton), Fujin Macduff (Carolyn Willmore), and her son. Soon, his lust for power fades into insanity as he envisions Banquo's ghost at his dinner table. Driven mad by guilt, Fujin Macbeth murders herself, followed closely by the death of Macbeth, who is beheaded by the bitter Macduff, revenge for the murder of his wife and son.

Pulling off the Shakespeare play with Japanese twists is no easy feat, a task the cast took on with determination. The Japanese elements of the play are seamlessly woven into the plot line, with creative costumes, Japanese language, and traditional scenery. The scenery helps emphasize the classic Japanese elements while still staying true to the story.

The makeup, especially on the three Yojo, was thoroughly thought out and creative, standing out with a definite "pop." The lines are flawlessly memorized – there wasn't a single stutter, pause, or "um" among the cast, something that deserves credit, especially when dealing with the intricate language of Shakespeare. All of the voices are crisp and clear, even without the aid of microphones. The cast often comes off stage, intermingling with the audience, compelling the audience to lean in closer.

The costume transitions on Macbeth demonstrate his decreasing sanity, dark grays replacing the fiery oranges; a simple but creative

touch to add to the drama. The blood is highly realistic and well executed in the fighting scenes, causing several gasps from the crowd. The special effects are well above average for a high school play, and helped bring the audience in closer to the action.

Three actresses stood out as superb – the three Yojo. All three of them truly fulfilled the role and stayed in character consistently. They brought fluid dancing, dehumanized voices, and original character to the stage. Their dynamic body movements, the precision of their synchronization, and energy they put into the roles was truly stellar. They acted not as individuals but as a single body, working like parts of a machine. They flow stealthily across the stage, walking in a spider-like fashion to their victim, deadly accurate and merciless.

Lake Braddock Secondary delivered Shakespeare in a way that was both traditional and original. The cast brought Shakespeare to life in a distinct and riveting way that couldn't be easily duplicated. In all, a thumbs up performance with superb acting, a charming set, and awe-inducing special effects.