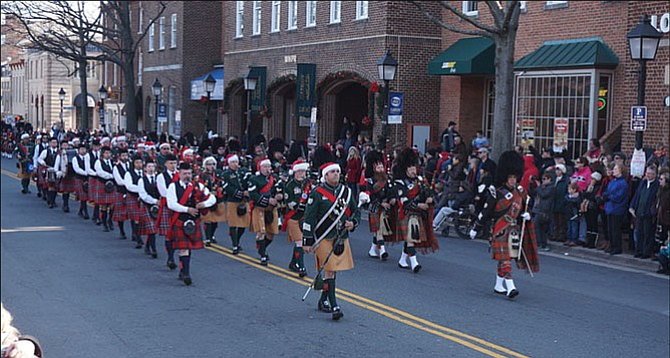 Elizabeth Anne Campagna loved Alexandria. She'd had a vision for a program to help the city’s underprivileged children, and the city had responded with funds and volunteers that helped build the Campagna Center. She felt that she’d owed the city something. So 47 years ago, Campagna teamed up with the city’s St. Andrew's Society to sponsor the city’s first Scottish Christmas Walk Parade.

The Scottish Christmas Walk Parade, or Scottish Walk as it’s colloquially known, has turned into an annual tradition hosted by the Campagna Center. The 47th Annual Scottish Walk will be held on Dec. 2. Parade Grand Marshall David McKenzie will lead a march of kilts, bagpipes, scottish terriers and more along St. Asaph Street up to Market Square.

But the tradition has also grown into a series of activities across the city, like the Taste of Scotland fundraiser held on Dec. 1 to showcase the ales of Scotland. The Heather and Greens Sale offers a variety of wreaths, garlands and heather bundles, with proceeds going to support the Campagna Center.

“The fact that it provides an opportunity for the city to celebrate its Scottish heritage, that’s an important part of the weekend,” said Tammy Mann, President and CEO of the Campagna Center. “Alexandria is a historic, proud city. Any opportunity to have that reflected in events in the community tends to bring out a very strong response.”

“For us, it helps us accomplish our work in serving young children new to our community,” said Mann. “Events that surround the weekend provide a vital basis of support, whether that’s making English language classes available or helping high school students navigate the complicated graduation landscape.”