‘A Disaster for Northern Virginia’
Votes

‘A Disaster for Northern Virginia’ 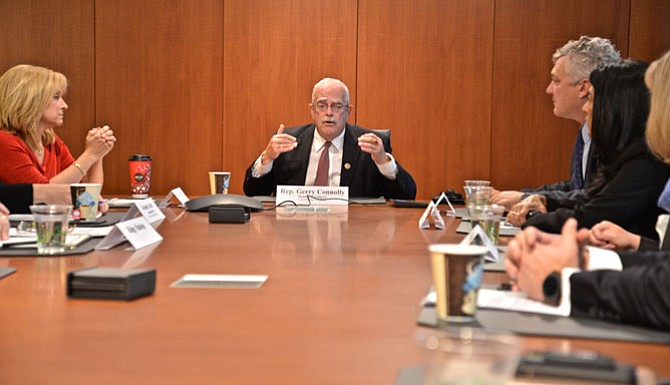 U.S. Rep. Gerry Connolly (D-11) meets with local leaders to discuss the consequences of the proposed Senate and House GOP Tax Reform Bills. Connolly admitted from the start that he wasn’t there to “sing their praises.” Photo by Andrea Worker.

Bob Adamson, chairman of the board of the Northern Virginia Association of Realtors, views the proposed legislation as “unfair to homeowners,” and that they will have a negative “ripple effect” on the local economy and residents of the community.

U.S. Rep. Gerry Connolly (D-11) says that he and his Democratic colleagues are more than willing to work in a bipartisan effort on meaningful tax form. “As a leader of the New Democrat Coalition, a group of pro-business Democrats, I have written on several occasions to Speaker Paul Ryan and Ways and Means Chairman Kevin Brady asking them to partner with us … to simplify the tax code, create revenue … and provide middle class tax relief.”

Speaking at a roundtable gathering that the congressman hosted at the offices of the Northern Virginia Association of Realtors (NVAR) on Monday, Nov. 13, to discuss the consequences of the GOP tax plans, Connolly says those overtures have been rejected.

“Congress had a real opportunity to pursue neutral tax reform that would lower corporate tax rates and benefit the middle class.” Connolly expressed “deep disappointment” at the House and Senate bills being proposed, categorizing both as “shameful, corporate giveaways” that will have unprecedented and far-reaching negative effects on Northern Virginia, the Commonwealth of Virginia, and the nation.

Connolly reported that by using “dynamic scoring” – a method of analysis that includes the potential feedback effect certain tax cuts can have, and that he said Republicans often advocate “because it provides more generous deficit projections for tax cuts” — the proposals actually increase the country’s deficit to $1.5 trillion over 10 years, “and somebody has to pay that bill.”

An assessment of the tax plans by Congress’ nonpartisan Joint Taxation Committee released on Monday, Nov. 20, seems to support the congressman’s concerns. The committee’s analysis projects that some 13.8 million moderate-income American households would actually see a tax increase as a result of the Senate plan by 2019. Households earning less than $200,000 per year would face increases of $100 to $500. The tax liability rises even more for earners between $75,000 and $200,000. According to the analysis, tax increases would be felt by 21.4 million households by the year 2025.

“1981, 2001, 2003. The Reagan and Bush tax cuts. So disastrous that they had to enact tax increases in 1982, 1983, 1984, 1987 and 1990” to raise the needed funds. “Then in the early 2000s, President George W. Bush took the record surpluses of the Clinton era and created record deficits.” Connolly added that the trickle-down theory is based on “the hope and the prayer that such tax cuts will someday pay for themselves,” but that history has already proven “that assumption to be false.”

TO DISCUSS THE IMPACT of the proposed legislation on the Northern Virginia region, Connolly convened a group of local business leaders, economists and financial experts, as well as participants representing social service providers, persons with long-term medical and care needs, economists, parents of students with significant student debt, and seniors.

Connolly set the stage for the discussion with a few more facts and figures, although he cautioned that “we still haven’t seen the whole of either proposed legislation.”

After Connolly’s remarks, Bob Adamson, chairman of the board of the Northern Virginia Association of Realtors, was the first of the gathering to offer comments.

Representing some 12,000 Realtors in the region, Adamson stated that the NVAR “wants to be part of the solution,” but finds the proposed legislation to be “unfair to homeowners,” disproportionately placing the burden of “filling in the financial gaps” directly on them.

NVAR Chair-elect Lorraine Arora agreed, adding that “real estate bolsters the economy” with so many related jobs and services, and that any plan that suppresses home buying will cause a “ripple effect of harm.”

The Realtors at the table also worried that the proposed tax reform will actually lower existing house values. NVAR CEO Ryan Conrad said that in the NoVa region, that decrease could be as much as $30,000 lost in home equity.

ADDITIONALLY, THE REALTORS foresee a decrease in housing stock that is already an issue, and even see Fairfax County’s successes toward ending and preventing homelessness, slip into reverse, as developers are less able than ever to profitably build affordable housing.

Continuing the “ripple effect” theme, JoAnne Carter, managing director of PFM Financial Advisors, LLC, said that the proposals threaten the means by which municipalities, nonprofits and other businesses fund their services and investments in improvements and expansion.

“Eliminating Private Activity Bonds and causing cuts to ‘advance refinancing,’” said Carter is severely hampering the ability to finance the basics, like “schools, roads, hospitals, transportation, airports, sea ports, all of it.”

That in turn “increases the burden on the counties,” said Adamson, while potentially depleting their main source of revenue. For municipalities like Fairfax County, that are, in essence, only able to raise funds through property taxation, the choices are dauntingly few. Either raise those taxes significantly, or reduce expenditure on infrastructure and public and social services.

“And if we damage our AAA Bond rating,” added Carter, “it costs more for these municipalities and service providers to borrow.” According to Carter, Fairfax County could save between $3-12 million when re-financing with a Triple A Bond rating. “Losing that could mean that public structures just don’t get built.”

Nancy Mercer, a licensed clinical social worker and the former executive director of the ARC of Northern Virginia, and Ridge Multop, an economist, former AARP Congressional Affairs and former House Budget Committee staffer, both discussed the impact the proposed tax bills could have on seniors, those with long-term care and/or medical issues, and those most in need and most vulnerable in the community.

Multop “put a face” on the discussion, speaking about an economist friend. “He’s 85 years old, on a fixed income, in assisted living. He looked at how these bills would impact him based on his 2016 tax filing and said it would raise his taxes by more than $3,000. How do people like him cope with that?”

Eliminating tax deductions for medical expenses and long-term care would be harmful to seniors, Multop said, possibly forcing more into custodial care and placing an additional burden on municipalities and nonprofits. “We are cutting our social safety network, one strand at a time,” said Mercer.

Multop donned his economist’s hat once more to also note that so far he had heard no mention from the GOP plan makers of the debt service on the increasing deficit. “That’s another $200 billion in interest costs that I don’t hear them having accounted for.” Multop’s concern is that Medicaid, Medicare and Social Security benefits will become the targets to shore up the financial levee in the wake of these tax cuts and the domino effect of their implementation.

Another personalized example of the the proposed reforms was offered by attendee Edythe Kelleher. The executive director of Southeast Fairfax Development Corporation, Kelleher could have spoken about impacts to development in that region, but instead, told how cuts to student loan interest deductions and a proposal to tax teacher’s assistant stipends would affect her graduate-school son.

“He works, he goes to school, he lives frugally. We provided him with a cheap car.” Kelleher says that if a tax on the modest teacher’s assistant stipend is adopted, “that’s $6,000 more each year, and he doesn’t know where that money will come from.”

Connolly responded to this story by saying the need to educate for competitiveness in the world’s marketplace is greater than ever. The congressman said that making getting an education even more difficult means “some will have to leave school. That’s hardly ‘making America great again.’”

As the session came to a close, NVAR CEO Conrad asked Connolly, “What’s your advice? What do we do next?”

In addition to the rally call to NVAR membership and AARP members, Connolly replied, “Run, don’t walk and immediately express your concerns to your representatives” at every level of government, and “tell everyone you know. This plan does not reflect our values and priorities. We can and should do better than this.”