Cooper goes the extra mile to help others and improve the quality of life in his neighborhood. 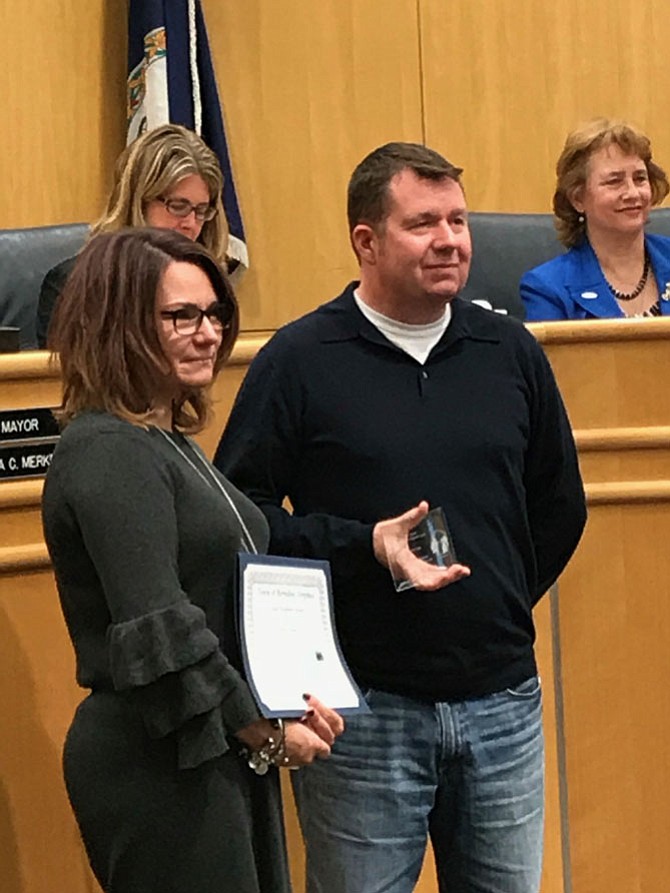 Lisa C. Merkel, Mayor of Herndon, and the Town Council recognized Roy Cooper as the winner of the town's annual Good Neighbor Award during the Herndon Town Council Public Hearing held Tuesday, Nov.14 in the Council Chambers Building, 765 Lynn St. The Mayor and Town Council presented Cooper with the award and a commemorative plaque for his contributions and commitment to his neighbors and the community.

"They especially remember how you were so helpful to your neighbor, Lou, who recently passed away from ALS,” Glakas said. “You mowed Lou's backyard and were always available to help Lou with tasks, large and small, including just spending time with him over a glass of wine. Your neighbors note that you are not only a great neighbor to your own complex on Lillian Chase, but also to your other adjacent neighbors at the International Apartments and Herndon Middle School."

Glakas explained Cooper took care of the local grounds, cutting down dangerous tree limbs and killing poison ivy that could harm children as they play.

“Your neighbor’s sentiments are summed up by the following statement, Glakas said. “Quote: Roy is a proud citizen of Herndon, and we’re blessed to call him our neighbor and friend,” she read from the nomination form.

After accepting the award, Cooper thanked the Town Council. Cooper said he was honored and humbled to receive the award, but also surprised. He said as a Midwest farm boy, helping his neighbors came naturally. Cooper hoped word of the award would get out because, "Just doing the right thing with your neighbors, benefits the whole community."

For more information about the Cultivating Community Initiative, a program within the Town of Herndon made up of volunteers and town staff to enrich the quality of life in Herndon by building community spirit and encouraging neighborhood beautification visit www.herndon.va-gov.

The initiative's next two programs are the "Herndon Holiday Homes Tour" Saturday, Dec. 2, 10 a.m.-4 p.m. and "Dress Up Herndon for the Holidays," an exterior decorating contest with judging Monday evening, Dec. 11, 6-8 p.m.