Focused on Improving Health of the Community
Votes

Focused on Improving Health of the Community 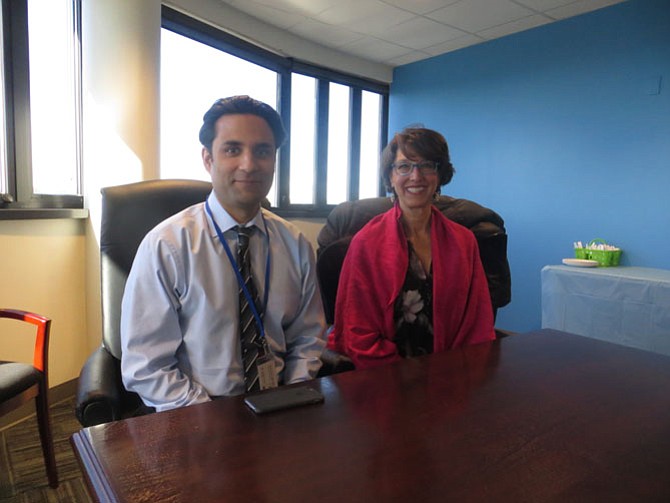 “It was important for me, at the beginning, to convey to the community that these are people in need and this is what their lives are like.” — Susan Abramson

The Neighborhood Health Clinic started with an idea; that all people deserve access to healthcare. Now, 20 years later after it was founded, that idea has become an organization stretched across Northern Virginia and taking care of 17,000 patients every year.

In preparation for an upcoming 20th anniversary gala, current and past directors of Neighborhood Health reflected on how the organization has grown and evolved, and the challenges it faces today.

According to Dr. Basim Khan, executive director of Neighborhood Health, the goal of the organization is to improve health and advance health equity. Neighborhood Health isn’t urgent care; its focus is comprehensive and integrated primary care. That means someone who comes in for a vaccine also could go down the hall to see their dentist. More than half of the patients treated by Neighborhood Health do not have insurance.

Neighborhood Health started out of dialogues in the 1990s under the Clinton administration about healthcare reform. Susan Abramson was working in U.S. Rep. Jim Moran’s office at the time and part of her work involved meeting with health department officials and becoming familiar with the health situation in the undocumented communities within Arlandria. Abramson said what she found was a community with no access to health insurance and families that couldn’t go to hospitals. Abramson said it was a community facing sexually transmitted disease, babies born at home, and children kept home from school. Abramson said the majority of them had come from El Salvador.

The organization that would later become Neighborhood Health began with a couple of nurses able to secure an apartment to work out of. Most of what they did was immunizations and prenatal care. Eventually it expanded into two apartments. When Abramson became involved, the three-year grant sponsoring the program had ended. Health and Human Services was going to give the program one more year to figure out how to continue. Abramson said the Alexandria hospital and Alexandria Health Department contacted her and asked her to help organize the efforts. Abramson left her job with Moran. She was initially told to create a funding mechanism for what already existed, but Abramson said it was apparent that what was in place wasn’t good enough.

“By the end of the first year, 1997, it was pretty clear that we were only addressing a fraction of the need,” said Abramson. Many of the patients they were seeing were living with rats, malnutrition, sexual abuse, sometimes no running water. “There were no services. There was nowhere to go. People would come in with serious illnesses and there was nowhere to send them.”

Abramson said the organization started partnering with ALIVE! (ALexandrians In Volved Ecumenically) and other local charities for clothing and book drives. What had started as a health department initiative had outgrown its original mission, and after a couple years, the group broke away from the health department and became a separate 501c.

By that point, the group was operating out of 14 apartments and had expanded services to include counseling and therapy, along with partnerships built with the police and social workers.

“It was an evolution,” said Abramson. “One step at a time.”

Seven years later, as the organization continued to grow, Abramson stepped down to begin the nearly full-time job of getting Neighborhood Health federal recognition. After a year of administrative work, Neighborhood Health was designated a federally recognized health center.

Over the years, while the mission has stayed the same, the strategies have had to evolve. Abramson recalled early in the organization’s history when the staff would do house visits.

“It was important for me, at the beginning, to convey to the community that these are people in need and this is what their lives are like,” said Abramson. “Now, that's not as practical.”

“You want to be connected to the community you serve,” said Khan. “You need to listen to patients to figure out how best to serve them.”

Khan says this also helps with the public health balancing act: ensuring widespread access to care while also remembering that behind every number is an individual with their own history and needs.

Khan grew up in Pakistan. He knew from an early age that he wanted to be involved in helping the underserved and work in healthcare specifically. Khan originally had an interest in international health, but says over time he realized there was a great need inside the United States and it would be easier to make a long-term commitment here. Khan trained at the San Francisco Public Hospital, then moved to Northern Virginia, joining Neighborhood Health first as a physician, then slowly working up.

“It's very gratifying,” said Khan. “It gives me a sense of purpose.”

Every case is different. Khan says in many ways, there is no “average” neighborhood health clinic patient. But many of those they serve are poor and immigrants. The client demographics have changed over time. Initially, Abramson said the clientele was 80 percent Latino, but both Alexandria and Neighborhood Health have grown and diversified. Now, Khan says Neighborhood Health’s clientele is roughly half Hispanic, a quarter African American or African immigrant, and another quarter is various.

“Virginia didn't expand Medicaid eligibility, which meant there were many more uninsured here than in other states,” said Khan. “That puts a constraint on our ability to grow. The demand is still greater than our supply. It's a very challenging environment. The cost of living here is very high and there's a much higher demand for services. And with half of our clients not having health insurance, for them, there are no other options.”

A third of the organization’s funding comes from patient insurance. The rest comes from philanthropy. Half of that is from federal grants, the other half from private donations or partnerships.

Abramson says the upcoming gala is a way for Neighborhood Health to celebrate their sponsors and partners over the years who have advocated for them. The 20th anniversary celebration will be held in the Mark Center on Dec.7, with a cocktail reception at 6 p.m. and a dinner and program at 7. The gala’s goal is to help fund the Neighborhood Health expansion goals for 2018.

Despite the financial hardships, Khan hopes to see the organization grow in the coming years to meet the demand. The goal in 2018 is to have 21,000 patients.

“We will continue to need support,” Khan said.