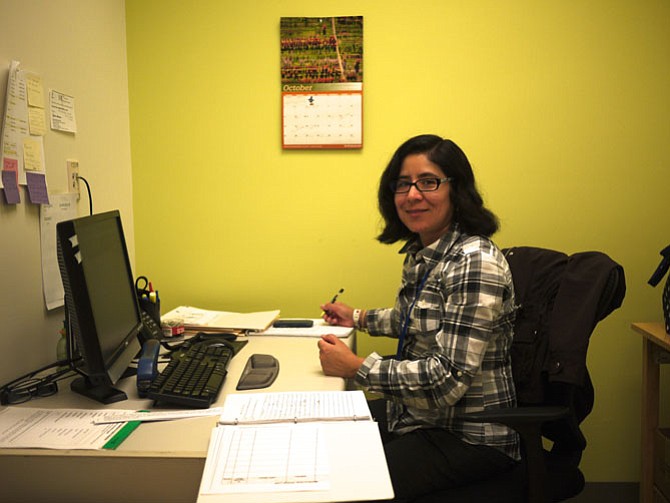 Karina Herrera at work at the newly renovated offices at 2 East Glebe Road. Herrera is a pharm tech who has been with Neighborhood Health for about 15 years. She works in the Medication Assistance Program. Photo by Eden Brown

And therein lies the story of the organization: it’s not just for poor, underserved or uninsured residents of the area. There are middle class patients who depend on Neighborhood Health for their family care because it’s a neighborhood health clinic, where doctors follow families for 20 years, give them more than five minutes a visit, and know their names, their children’s names, and their situations.

Many people see Neighborhood Health as a clinic just for patients who are unable to pay or for urgent care needs such as a fever or cough. This is not the case with Neighborhood Health, which sees 15,000 patients annually — all of whom are registered, long-term patients with electronic files and records. It is not the clinic of last resort, but for many young families, the first place they want to take their young child, because they know he will be looked after for the next 10 years by the same office.

Neighborhood Health is not a walk-in clinic. Patients need to register and come in regularly. Neighborhood Health does have a clientele which is sometimes undocumented (no questions asked), most are 200 percent below the poverty level, and more than half are uninsured. There is a sliding fee scale which determines how much each patient will have to pay. Often that amount is $10, for equivalent treatment that might cost hundreds elsewhere.

The community health center concept was an idea started by Lyndon B. Johnson during the “War on Poverty” campaign. In 1965, there were two centers serving a handful of Americans who could not afford health care. There are now 25 million Americans served by health centers.

Neighborhood Health, which in 2004 became the area’s first Federally Qualified Health Center (FQHC), has grown to nine separate buildings from a one-bedroom clinic in public housing on Executive Avenue in Arlandria. Its doctors do more than serve the poor of Alexandria and surrounding areas: they catch people falling ill before their illness defines their lives. “Our goal,” said Khan, “is to find the person with chronic illness, like diabetes, which affects 20 percent of the adult patients at Neighborhood Health, before the patient needs dialysis or amputation.”

Without Neighborhood Health, many of these patients go undetected and by the time they get health care, it’s too late. Accessibility is a major part of the community health center concept, said Khan. That means having multilingual staff, and, if needed, finding that Bangla or Amharic speaker to translate; having locations patients can reach by foot or bus; and getting appointments within one week, or less. Another major benefit of Khan’s organization is the computerization of every medical record, so that an individual who doesn’t track his own health has his medication and medical history on file. 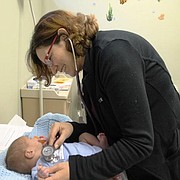 Dr. Martha Welman joined Neighborhood Health in 2000 as its first pediatrician, and has led its pediatric expansion program at Casey. To her, it’s all about the relationships she has with her patients. What makes her long days at the center worth doing? “It’s the fact that you are really appreciated,” she said. “I have patients I have cared for since they were born, and they are now going to college.”

At the same time, working at the center is a commitment. “You don’t work in neighborhood clinics without that commitment to long days and spending the extra minutes with patients,” said Khan. “There is a burn out rate. We do a lot with very few doctors. The need is well beyond the supply, and we are having trouble adding a doctor to the center because of the lack of money”.

Mental health and dental care are part of Neighborhood Health’s effort: these two aspects of health are often overlooked or overpriced. The psychologist at the East Glebe Road Health Center said she spends a lot of time managing mental health issues like past trauma and family reunification. Most of the people she treats, many of them immigrants, have been through some very rough times before reaching the U.S. and have never spoken about it. Since mental and behavioral health issues often cause chronic homelessness and substance abuse, it makes sense to catch these issues early.

Khan says among the biggest health threats to low-income residents of Alexandria are chronic diseases like diabetes or hypertension, but he is equally perturbed by the failure of many uninsured residents to get specialized care. Neighborhood Health can take care of a variety of sick people, but for serious cases involving neurology, oncology, or major surgery, it is hard to find places to send the poor. Jennifer Sims, a nurse practitioner who has been at East Glebe Road for four years, said many of her female patients have chronic bleeding. For years, they’ve been shunted off to the Emergency Room, where the bleeding may be stopped, but it’s not a solution to the underlying problem. Sims says many of these women need a hysterectomy, but affording one is almost impossible. They have to go to Charlottesville to the UVA Medical Center to get treated, and many find it hard to get there.

Khan would like more of his patients to be covered by health insurance, because the paying patients help make it possible to take care of those who cannot pay. In 2014, 68 percent of Neighborhood Health’s patients had incomes below poverty levels. Sixty-three percent of their patients were uninsured. Given the ratio at Neighborhood Health of uninsured to insured patients, Khan cannot afford to hire the extra doctor he needs. That is one of the reasons he continues to spend as much as 20 percent of his time as a working physician in the clinics: not only does it energize him to keep giving his best when he meets with patients, but it’s also part of the balance of running a busy health center which is understaffed: double duty is a given.

For those who do not understand why supporting Neighborhood Health is important to them and their community, Khan points out his clinics served more than 15,000 patients in 2014 — 4,111 children and 10,981 adults – and provided 46,647 health care visits. That is up from 10,000 patients five years ago. This is care that would have overburdened the hospitals, or gone undone, putting at jeopardy a swathe of Alexandria’s population that works for a living but does not make enough money to pay for insurance. Taxpayers benefit from organizations like Neighborhood Health, they just don’t see the benefits as clearly as when potholes get filled in, or schools get refurbished. All residents pay the financial price when the uninsured and underserved use the emergency room as their primary source of care because this drives up the costs of all healthcare services.

Khan is hoping to see more community support of Neighborhood Health. He says in any given week he gets far more requests for health care than he can accommodate. As a member of the Mayor’s Special Advisory Panel on the Health Care Needs of the Uninsured, he appreciates the plan to hold a health fair on Nov. 14, and hopes it will assist those who might otherwise go undiagnosed; he also views the problem as a much larger one which is outpacing the growth of his own organization. Neighborhood Health welcomes AmeriCorps volunteers and has opportunities for other volunteers. A primary need, however, is financial support. The larger, more permanent facility in the new Richmond Highway building is a comprehensive facility, owned versus rented, that will allow Neighborhood Health to serve more people, with the addition of 15 medical exam rooms, eight dental chairs and five counseling areas. To pay for that facility, Neighborhood Health needs community support. For more information, to become a patient, or to donate, see www.neighborhoodhealthva.org and campaigndirector@neighborhoodhealthva.org. 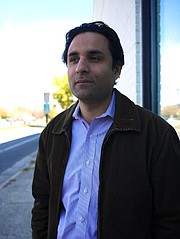 Dr. Basim Khan spent much of his childhood abroad, moving often and acclimating to each new international city. It still sometimes surprises him that he chose to focus on improving health care in this area instead of returning overseas to work in global health. Khan drives an older Acura sedan littered with the signs of a man who is always on the move, a cup of coffee in one hand, a smartphone in the other, and his mind on his to-do list.

He has known he wanted to be a community health doctor ever since he went to medical school. His goal is to improve access to basic health care in Northern Virginia, but his dream is that health care can be more affordable and more personal for many more Americans, of all income levels.

Khan has a longstanding interest in global health and HIV/AIDS; he has volunteered abroad in developing countries. He speaks Spanish, Urdu, and Pashto. He is Board Certified in Internal Medicine and a Fellow of the American College of Physicians.

Khan joined Neighborhood Health in 2011 as an internal medicine physician. He became medical director in 2013 and executive director in 2015. He received his medical degree from the University of California, Los Angeles, and residency training from the University of California, San Francisco, in an urban underserved primary care program based at San Francisco General Hospital. He also has a Master’s degree in public administration from Harvard University’s Kennedy School of Government, where he was a Center for Public Leadership Zuckerman Fellow.

He has served on the board of directors of multiple organizations, including the National Physicians Alliance, a group that advocates for improving access to healthcare. He has appeared in multiple media outlets including the Los Angeles Times, PBS News, and NBC News. Despite this schedule, Khan continues to see patients, using part of his day to “keep his hand in” and because good doctors are still in great demand at the Neighborhood Health centers. Those interactions with patients give Khan perspective and keep him aware of issues, as well as acting as the daily reminder of why he does this: the reward is the healthy person, often uninsured, smiling back at him at the end of a long day.

Dental Care at the Arlington County, Division of Public Health

Primary Care for Adults at the Alexandria Community Services Board