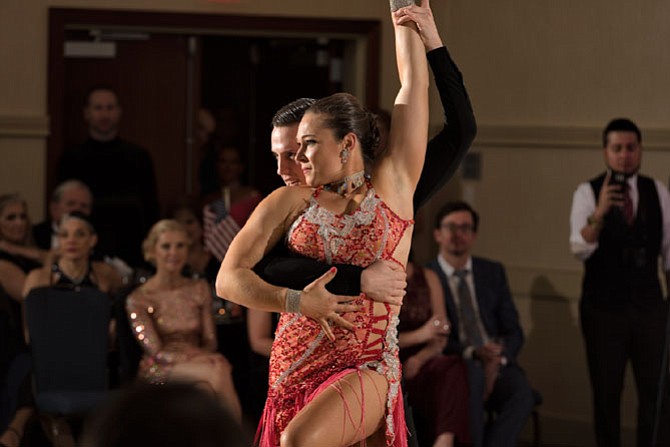 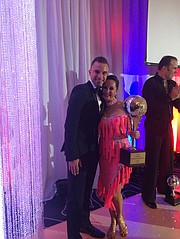 Dawn Devaney, M.D., and Sevrin Shapiachan, owner of the Herndon-based Fred Astaire Dance Studio Reston, win the Mirrorball Trophy after a night of dancing competition as local Service “Stars” teamed up with professional dancer instructors and competed against each other during the benefit gala event in Herndon.

The Fred Astaire Dance Studio-Reston, located at 585 Grove St., in Herndon, lit up the night as they presented a charity gala based on ABC's number one entertainment show, Dancing with Stars. The event was held at the Hyatt Regency Dulles in Herndon on Veterans Day, Saturday, Nov.11, 5:45-11:30 p.m. Tickets for the event sold out weeks before the date, leaving the ballroom with a capacity crowd.

The night included a silent and live auction, celebrity guest judges, and dinner with wine service. Professional performances, complete with gorgeous costumes and a playlist of hot tracks, as well as the evening's exceptional Dancing with the Services Show and Awards Presentation completed the evening.

“I was so excited and honored to be asked to participate in this... event. It’s everything I could have imagined and more,” wrote Jennifer Baker, Vice Mayor of Herndon on the Fred Astaire Dance Studio-Reston website.

According to Susannah Moss, executive director of Fred Astaire Dance Studio-Reston, competitors had been paired with a certified Fred Astaire dance instructor. Each pair learned a choreographed dance routine for the judges to score. The competitors spent weeks practicing their steps.

“I feel so blessed and fortunate to be able to put on this exciting event, and uniquely adding the twist of promoting who our community celebrities should really be, all those men and women in uniform as they are today's real stars," wrote Susannah Moss, Studio Director Fred Astaire Dance Studio-Reston.

At the end of the evening, although it was a challenging call, the judges awarded the Mirrorball Trophy to Dawn Devaney, M.D., and Sevrin Shapiachan owner of Fred Astaire Dance Studio Reston/Herndon.