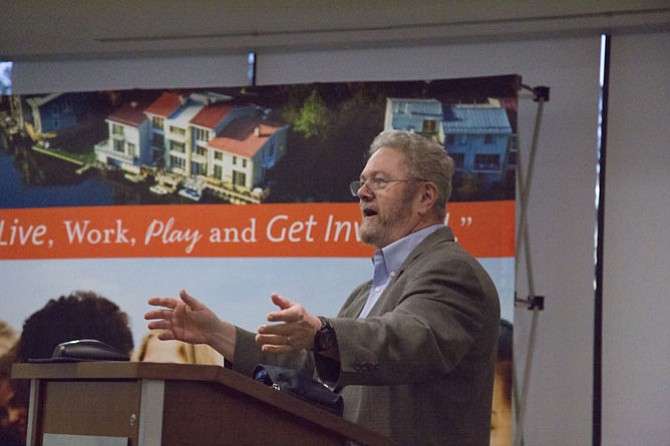 On Sept. 28, John Bowman spoke to the board about why they should vote for him to fill the vacant at-large seat that was vacated by Ray Wedell on Sept. 1. Bowman was successful over three other individuals who submitted their candidacy after an open call for candidates. He will finish Wedell's term, which expires in April 2018. Photo by Fallon Forbush.

Sridhar Ganesan, Reston Association Board at-large director and treasurer, discussed the latest draft of the association’s proposed 2018 budget, which proposes a $14 reduction in annual assessments for its members, during a community meeting on Sept. 14.

Carol Nahorniak, president of the Friends of Reston for Community Projects, advocated for the Reston Association to finance improvements for the Walker Nature Center during a community meeting on the association’s 2018 budget on Sept. 14. 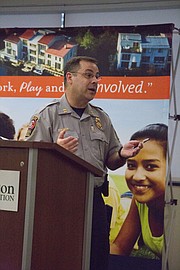 Fairfax County Police Department Reston District Station Commander Capt. Ronald Manzo addressed the Reston Association Board and members during the meeting on Thursday, Sept. 28, about crime activity. Though traffic is typically the No. 1 concern for the station, he reported an increase in thefts of property from parked cars in the area as well as gunshot complaints. “We’ve gotten lots of gunshot complaints from the Reston area … not only are we getting the gunshot complaints, but that means somebody’s shooting a weapon out in the open and there could be victims,” he said. Manzo finished his report by announcing an open house that is being organized for the public to visit the Reston District Station on Oct. 21. 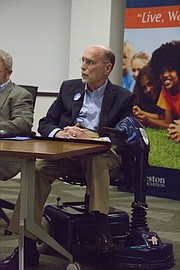 Ken Fredgren, chairman of the all-volunteer Reston Accessibility Committee, testified in support of funding accessibility improvements for the Pony Barn Picnic Pavilion renovation project on Sept. 28. “Due to the neglect of previous RA Boards, I cannot use my neighborhood park … please do create accessible parking and accessible routes, and replace most surfaces so neighbors and guests with disabilities can use the park,” he said.

Julie Bitzer, Reston Association Board South Lakes District director, discussed the feasibility of a reworked design for an accessibility ramp for the Pony Barn Picnic Pavilion, which was provided to the board by a member of the project’s working group on Sept. 28.

The Reston Association Board of Directors is considering lowering the association’s annual assessment rate from $692 to $678 per household in 2018.

Sridhar Ganesan, an at-large director and treasurer of the board, presented a proposed budget to the community during a meeting on Thursday, Sept. 14.

Membership to the RA is required for all residential property owners in Reston, and they are billed annually for the assessment. The potential $14 reduction diverges from the previous board’s budget discussions last fall, which resulted in a $35 increase from $657 in 2016 to $692 in 2017.

Last year’s jump could have been higher, as the association was approved to operate at assessment levels of $720 per household, but the board voted to use $550,000 of operating surplus to lower the actual charge to its members.

“No decisions have been made,” Ganesan said during the meeting. “None of this has been decided.”

Though the association anticipates reduced revenues in 2018, it also anticipates lower expenses, according to Ganesan.

In 2018, the employee share of the association’s health insurance benefit is proposed to rise from 5 percent to 10 percent and retirement benefits are proposed to lower, according to Ganesan.

A pool of funding to reward employees for high performance instead of automatic, annual salary increases has also been allocated in the proposed budget.

“The third thing that the staff has been toying with is, instead of dealing with annual increases, can we look at merit-based performances as one way to compensate people who are performing really well,” Ganesan said.

The association plans to ditch legal consultants and rely more on in-house counsel, which it will need to hire, to reduce legal fees in 2018 by $325,000.

“Legal fees is something that jumped out,” Ganesan said. “This has been a matter of public discussion a lot.”

The association had $688,462 in legal expenses in 2016, according to a public draft of the RA’s 2016 Form 990, Return of Organization Exempt from Income Tax, which is to be filed to the IRS. Two of the association’s highest-paid contractors provided legal services in 2016: Chadwick Washington of Fairfax was paid $424,966 and Reston law firm Odin, Feldman and Pittleman was paid $237,299, according to the form.

The pool for members subject to assessment fees is also projected to continue to grow.

There are currently 20,668 dwellings subject to annual association assessment fees, according to Ganesan. The association expects that number to rise by 429 in 2018 when two new developments are opened: Sunrise Square Sekas Homes and The Vine luxury apartments.

“We are clearly getting more people, and, from a staff perspective, they will continue to focus as the new developments come in terms of bringing them into the RA fold,” Ganesan said.

However, the association has a goal of increasing its non-assessment revenues by 10 percent in 2018. How it will accomplish this is still up for consideration by the board.

The association is projecting an operating deficit of $10,903 in 2018 if no changes are made to the operations of the controversial Lake House property, according to Ganesan.

The association took out a $2.65 million loan to acquire the property and will make principal payments of $182,800 until July 2025, when a balloon payment of $1.57 million is due, which the association could handle by paying the balance using reserve funds or through refinancing, according to Ganesan.

“Something for us to think about: Paying off the loan will lower the assessments from $678 to $669 immediately,” Ganesan said.

The RA began enrolling elementary and middle school students for its “RA Fit Kids” after-school program in May of last year, which has been operating out of the Lake House below its 50-spot capacity.

It is projected that if the association were to scrap the after-school program and use the Lake House exclusively for corporate rentals, it would yield a net profit of $132,582 instead of losses, according to Ganesan.

The Lake House is also used for camp programming during school breaks in the winter and summer. If these were to be continued with the corporate rentals, the association is projected to yield a net profit of $119,368, according to Ganesan.

Members can also provide feedback by email to RABudget@reston.org, or by mail to Reston Association, ATTN: RA Budget Suggestions, 12001 Sunrise Valley Drive, Reston, VA 20191. Members are encouraged to describe their ideas in detail.

During the Sept. 28 meeting, the board also voted to appoint John Bowman to fill the at-large seat that was vacated by Ray Wedell on Sept. 1. Bowman will finish Wedell's term, which expires in April 2018.

The board decided between four candidates who applied for the position when the RA issued a call for candidates on Sept. 7: Bowman, who ran for positions on the RA Board in 2008 and 2015; Ven Iyer, who ran for an open at-large seat during the 2017 spring election that was won by Eric Carr and was also considered for Eve Thompson’s at-large seat when she resigned in June but was passed over for Sridhar Ganesan; Moira Callaghan, vice president of the Reston Citizens Association; and John Pinkman, co-founder of Rescue Reston and a member of its board of directors.

While the board will wait to take a formal position on the county’s proposal to increase the density of Reston, board members were unanimous in their opposition to the amendment.

The proposed amendment would alter the zoning regulations by changing the density cap in Reston for areas that are zoned Planned Residential Community (PRC) District. The current cap for these areas, which the majority of Reston is zoned, is set to an average of 13 people per acre. The Fairfax County Department of Planning and Zoning is recommending raising the cap to an average of 16 people per acre.

Each director who was present made statements at the end of the public portion of the Sept. 28 meeting before going into executive session. The board members either fully supported holding the density cap at 13 or expressed significant hesitation in increasing the density without first expanding infrastructure before the amendment is approved.