Part One: An overview of Alexandria’s small area plans along the Metro. 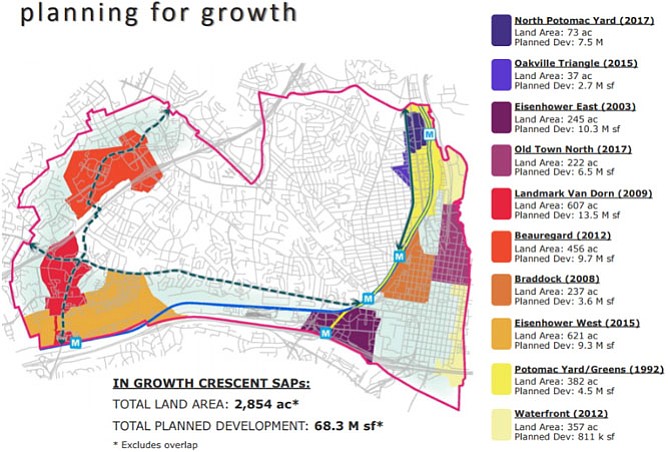 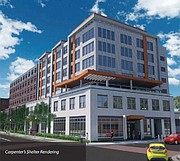 Rendering of the redeveloped Carpenter Shelter

Rendering of Park Residences, redeveloped from the Ramsey Homes.

Alexandria is a city of smaller neighborhoods. Some date back to before the founding of the country, others are developments that are still in planning. For nearly all of them, there’s a plan. The city’s small area plans provide a guideline for the city in terms of development and infrastructure improvements for various neighborhoods. At the City Council meeting on Sept. 26, an update was released to the council providing an overview of the city’s ongoing small area plans.

New residences are coming into the Braddock neighborhood. A four-story, 17 townhouse project called Park Residences is currently under construction and comes with streetscape improvements and contributions to the Braddock Open Space Fund. For most of the housing developments in Braddock the emphasis is on expanding affordable housing availability.

The Alexandria Housing Development Corporation secured tax credit funding in May for the redevelopment of the Carpenter Shelter into a seven-story mixed use development overtop of an expanded shelter. Part of the redevelopment includes 97 new rental units available at 40 to 60 percent of area median income.

Two Alexandria Redevelopment and Housing Authority properties in the area are in the redevelopment process. The first, Ramsey Homes, was approved in November 2016 to replace four buildings of housing containing 15 total affordable housing units with one multifamily building containing 52 housing units. Of the new units, 15 will be available at below 30 percent of area median income, while 37 will be available at 50 to 60 percent of area median income. The project was approved for a tax credit in May and is currently undergoing an environmental assessment.

The other ARHA project, Andrew Adkins, is still in the middle of a troubled approval process. Specifics of the site, like levels of affordability, ARHA’s units, and potentially moving some units off-site, remain topics of debate as the City Council moves into consideration of the project this fall.

In the Eisenhower East Small Area plan, centered around the Eisenhower Metro station, the big themes are improving quality of life for Carlyle residents, employees and visitors to improve the area’s competitiveness as a regional office market. Several blocks are scheduled for redevelopment with residential uses on the upper floors and ground floor retail, including a new grocery store.

Further west along Eisenhower avenue, plans for the area near the Van Dorn Metro station focus on infrastructure improvements to support accessibility to new development. Greenhill Capital Corporation has submitted an early concept design to the city for a coordinated development district for seven parcels in the area. The new district would include commercial, residential, and retail projects connected by a new network of streets. One aspect of the proposed development is a multimodal bridge over Backlick Run and the railroad tracks once a threshold for new development is reached. Potential affordable housing development options are being considered at the site in negotiations between the developer and city staff.

Several pedestrian-focused infrastructure improvements were recently implemented in the area, including ADA compliance to local intersections, lowering the speed limit to 25 mph, and adding a bike lane to Stevenson Avenue.

The final small area plan is centered around a Metro station is for one that has not even opened. In 2021, Potomac Yard will be the newest Metro station. The surrounding small area plan was approved by City Council in June and includes complete redevelopment of the existing theater and shopping district near the planned metro stop. The planned Potomac Yard redevelopment includes office space close to the Metro and retail/residential development further out.