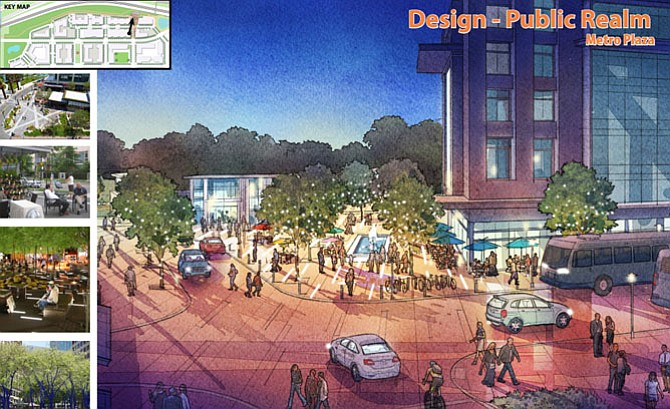 Alexandria — As the northern gateway into Alexandria, Potomac Yard needs a little work.

North Potomac Yard development by distance to the Metro.

Today the area is divided into a strip mall on one side of Potomac Avenue anchored by a Target and an empty lot on the other with a recently closed movie theater. But by the early 2020s, as the new Metro station at Potomac Yard opens up, an updated plan for the region hopes to have the area transformed into a new booming metropolitan neighborhood.

The original North Potomac Yard Small Area Plan was approved in 2010. In 2015, Potomac Yard developer representative JBG Companies expressed a desire to further development of the area in ways that would require updating the plan.

A major emphasis for the update was balance between competing interests. North Potomac Yard is slated to have 7.5 million square feet of development. Nearly half, 2.9 million square feet, will be office space built within a quarter-mile of the Metro station. Within that radius, north of the office space is several blocks of planned mix office and residential developments. To the south and to the north out for another half-mile, most of the new development is primarily residential.

During the approval process, members of the City Council had each expressed hopes for different aspects of the project. Council members Paul Smedberg and Redella “Del” Pepper had emphasized the need to learn from the mistakes of Eisenhower and push for a sense of place. Eisenhower, Smedberg said, had never really developed a sense of community. Unlike Old Town or Del Ray, Smedberg said the developments in Carlyle and along the east end of Eisenhower Avenue had never grown a nightlife or recreational atmosphere.

Much of the plan update focuses on public spaces designed to make the area more livable and approachable than the area around the Eisenhower Metro station. It was noted during the City Council discussions that the the first sight on either side of the Eisenhower Metro is empty parking lots dumping out onto Eisenhower Avenue. The North Potomac Yard update includes a “Metro plaza” space designed to make the surrounding area feel more lively and active. The plaza connects to trails that run north and south of the area, connecting to Crystal City and the Braddock area.

The need for open space was balanced against the city’s increasing affordable housing need. The update takes advantage of the recently changed city code allowing bonus density up to 30 percent in exchange for more affordable units.

The City Council approved the plan update, but Smedberg noted that close attention needs to continue to be paid to the North Potomac Yard development to ensure the plan is implemented as envisioned.