McLean Fire Station Opened Its Doors For A Day
Votes

McLean Fire Station Opened Its Doors For A Day 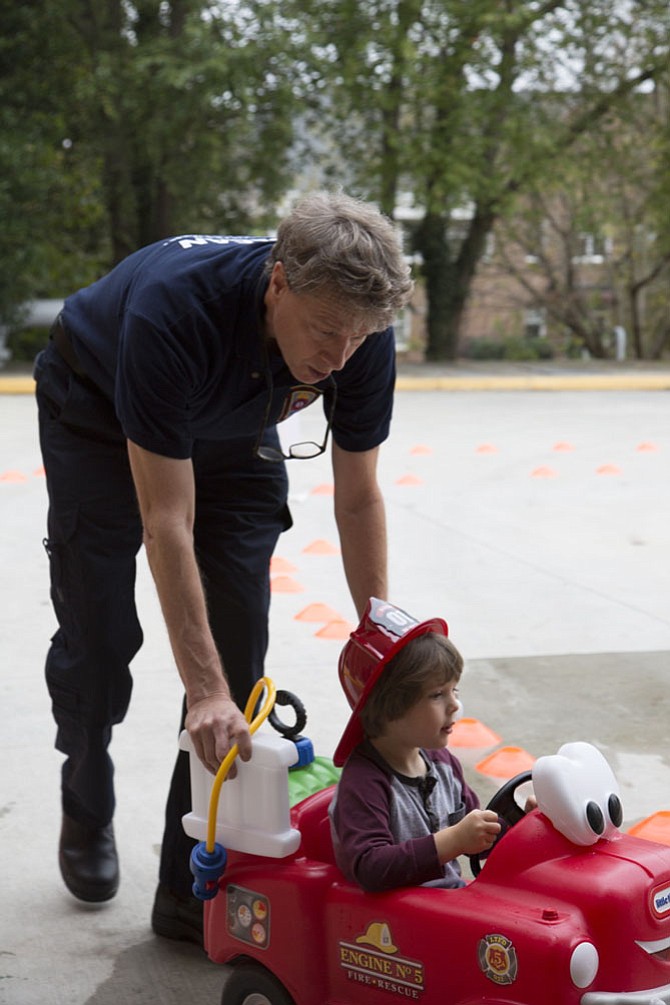 Mac Reed of McLean, a volunteer emergency medical technician with the McLean Volunteer Fire Department, pushes Kameron Kruse, 3, of McLean through a driving course on a 22-inch tall Little Tikes “Spray & Rescue Fire Truck,” complete with a pressurized water tank and hose to squirt water onto a pretend fire at the end of the course. Photo by Fallon Forbush.

As a crowd watches, pilot Andrew Wiseman of Loudoun County takes off from the McLean Volunteer Fire Department during the open house carrying police officers and paramedics Ali Sepehri of Fairfax and Rob Murray of Centreville. The three work for the Fairfax County Police Department Helicopter Division, which provides support to the Fairfax County Fire and Rescue Department for aeromedical evacuation, search and rescue and other specialized air support as needed.

Joel Fry, a master technician with the station, operates the Jaws of Life hydraulic tool during a vehicle extrication exercise for open house spectators. When car accident victims cannot be removed safely from a vehicle, firefighters are trained to remove doors, the roof and the dashboard of a vehicle to make more room for paramedics and EMTs.

In celebration of Fire Prevention Week Oct. 8-14, all Fairfax County Fire and Rescue Department stations hosted open houses on Saturday, Oct. 14, where the public was invited to meet their local firefighters.

McLean Station No. 1 Fire Chief Lt. John Hootman and Board of Directors President Kay Hartgrove and their firefighters, paramedics and emergency medical technicians were on site to show off their vehicles and equipment and teach children and grownups alike about fire safety.

“We had a huge crowd,” Hootman said.

A popular question curious guests asked was: “Why do fire engines show up for medical emergencies?”

It’s a matter of response time, according to Hootman.

“There are more fire engines than ambulances that have trained paramedics,” he said.

THE FIRE STATIONS in the county also have automatic aid agreements with Loudoun and Arlington counties, according to Hootman.

“The lines are transparent from dispatch,” he said. “It all depends on what the person says who calls 911.”

However, the most popular question topic during this year’s open house was about Virginia’s opioid overdose epidemic. Opioids are drugs that mimic the properties of opiates like morphine and codeine, and include illegal drugs like heroin and legal drugs like fentanyl and prescription painkillers.

“We told them: Yes, we’ve gotten more calls about it,” Hartgrove said.

Some guests were concerned about whether the station had access to naloxone.

“Our medical providers already have the scope to deliver [overdose-reversal drugs],” Hootman said. “Typically, our paramedics can take care of [overdoses].”

The National Fire Protection Association, a global nonprofit organization that develops fire, sprinkler and electrical codes and standards, has a goal of eliminating death and injuries from fire, electrical and related hazards. In that effort, it develops educational programs to inform the public about the adoption of codes and safety issues.

NFPA has advertised Fire Prevention Week since 1922. This year’s theme was, “Every Second Counts: Plan 2 Ways Out!”

EVACUEES could have less than two minutes to escape to safety after smoke alarms sound, according to the NFPA. Here are the key messages to the NFPA’s annual campaign for preparing an escape plan:

*Once you get outside, stay outside. Never go back inside a burning building.

A “Plan Your Home Fire Escape” mini-lesson can be downloaded from the NFPA’s website at www.FirePreventionWeek.org.