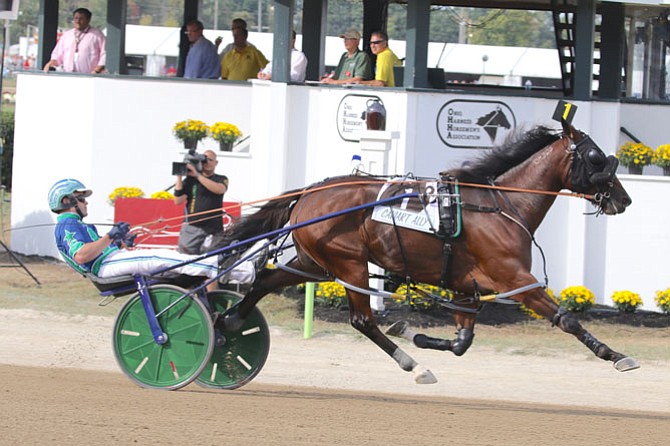 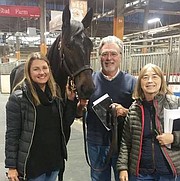 Judy and Buck Chaffee of Vienna have been parents and horse owners for more than three decades. But they never had the pleasure of both coming together so joyfully as they did during a four-day span last month.

On Sept. 20, the Chaffees experienced the biggest racing triumph of their 33 years in the business when Caviart Ally won the $163,950 Jugette Stakes final for 3-year-old female pacers in Delaware, Ohio. While they could not witness the event in person, it was for a good reason as they were at their Vienna home with daughter Drew and her husband Kevin, awaiting the arrival of their grandson.

“The baby was due at any moment,” Judy Chaffee said. “She was having contractions that day, which did stop.”

“It’s been quite an experience for us,” said Judy Chaffee, who said she and Buck had not come off Cloud Nine more than a week later. “I don’t think we’ve ever had a more stressful day. Not only could the baby have come but we actually had two fillies racing in the Jugette that day and it was quite a rollercoaster of emotions.

“Our filly, Jaye’s A Lady, raced first. We were hoping she would do well and make the final, and she broke stride right at the start. So, that was a low feeling at that moment. Then we went from Jaye to Ally. We went from one extreme to the other. It was quite a day. We’ve experienced it all over the years, but I think this is the highest we ever felt.”

THE CHAFFEES watched it all unfold on the internet and were also getting phone updates from son Terry, who operates their Caviart Farms in Paris, Ky. They wanted to be at the race, but they knew they would not have enjoyed it had they left Drew and Kevin alone.

“Their little girl was staying with us in case she had to go to the hospital,” Judy Chaffee said. “As much as we would have loved to have been there, we opted to stay home for our daughter because we’d be taking care of their little girl while she was in the hospital. We had a choice to make, and like with everything else, I think family has to come first.”

Especially when it comes to the Chaffees, as their current standing as breeders and owners has been handed down through the generations.

Judy Chaffee’s maternal grandfather, Lowell Chapman, was a Standardbred owner in Maine who raced on the New England and Canadian circuits. Judy met him a few times but was so young, that the two never really talked about racing.

“But I think I inherited the love of horses from him,” Judy Chaffee said. “My mother and father went to the races and I used to have to babysit my sister when they went. I got to go sometimes, but I never realized I would ever be part of it. My mother (who has passed away) would speak about that, and we both agreed my grandfather and I would have a ball together. We would be going to [the sales] together. It would have been quite a bonding experience and we would have loved experiencing it.”

In 1978, however, Judy Chaffee saw herself as a career journalist. Working as a reporter for the Portland Press Herald, she met architect Clarence “Buck” Chaffee at a project meeting at the selectman’s office. Judy met him as “Buck,” which probably helped get the relationship started as opposed to the alternative of the given name.

“He was named after his father, and they were looking for something to call him so they wouldn’t be called the same,” Judy said. “His aunt came up with the name Buck; I’m glad she did.”

Their chemistry was immediate and the two began dating. Shortly thereafter, Buck Chaffee was moving from Maine back to his home state of Virginia and Judy gave up her newspaper career to join him. When it came time to meet her future in-laws, Buck and Judy were greeted by a note on the door that said, “Meet us at Rosecroft.” It was then, that Judy discovered Buck Chaffee’s parents raised and raced horses in the Mid-Atlantic area, most notably at Rosecroft and Freestate.

“It’s funny, when Buck and I met each other we never even mentioned horses,” Judy said. “It turned out we both loved the horses and the racing.”

The two married within the same year they met and the first of seven children came shortly thereafter.

“I expected to work as a reporter, I guess, forever,” Judy Chaffee said. “When Buck and I started to have a family, I became a stay at home mom and raised the family.”

AS THE FAMILY GREW, so did their love of racing. One day in 1984, Buck and Judy decided to attend the Standardbred Horse Sale in Harrisburg, Pa., as spectators only. It would turn out to be a milestone day in their lives.

“We were watching the sale progress; and Buck turned to me and said, ‘Which would you rather have, a house or a horse?’ and I said, ‘A horse,’” Judy Chaffee recalled. “We bought our first horse, her name was Good Tal. So that was the beginning, and we’ve had horses ever since.”

But not without some immediate trepidation.

“When we bought her,” Judy Chaffee said with a laugh, “Buck looked at me and said, ‘What do we do now?’”

As luck would have it, an Ohio resident sitting behind them was eavesdropping.

“He told us, ‘Send it to Joe Adamsky, he’s a good, honest horseman,’” Judy Chaffee said.

The Chaffees did just that, and Good Tal became a stakes champion in Ohio. The couple remained lifelong friends with Joe, who has since passed away, and his wife and had him train several other horses.

After Good Tal, Buck and Judy began adding to their stable and raising them on Buck’s parents’ family farm in Fredericksburg, Va.

“Every year we tried to buy a horse or two and we had some success,” Judy Chaffee said. “Nothing that was like Ally or anything, but we enjoyed it. We’ve had horses with [Ohio trainer] Jim Arledge for quite a while.”

Arledge worked with Caviart Sydney, whose biggest win came over My Little Dragon in the 2006 Matron Stakes for 3-year-old filly pacers, and Sydney’s mother, Caviart Sierra.

“Basically, Sydney was racing against My Little Dragon and Darlin’s Delight during those 2- and 3-year-old years,” Judy Chaffee said. “She didn’t beat them except for this one race. But she was there all the time. Sierra won her first five races, which were all stakes races, but then she was injured and it basically ended her career and she became a broodmare for us.”

In 2007, after several years of intense research, the Chaffees purchased their Kentucky farm on Winchester Road — the famed Avenue of Champions.

“We always wanted to have a breeding farm once we got in the business,” Judy said. “We used to go to Kentucky and we just looked for a farm there. Buck was busy working so Terry and I went and picked out a farm. It’s 225 acres and it works well for us, there’s room to expand. We have 18 broodmares, and the yearlings and the foals.”

THEY NAMED IT Caviart Farms because of Judy’s penchant for the 1980s TV show “Lifestyles of the Rich & Famous,” hosted by Robin Leach.

“He would end the show and say, ‘Champagne wishes and caviar dreams,’” Judy Chaffee said. “I liked the caviar dreams and we did have caviar dreams. Buck said, ‘I like it better with a T on the end,’ so that’s where Caviart came from.”

So, it was a case of pretty much making up words?

Terry runs the farm and is on the phone with his mom constantly while Buck tends to his consulting business that he started 10 years ago.

“This is my profession now,” Judy Chaffee said. “I pick out the stallions, I keep track of the ovulation of the mares and tell Terry who to check each date and so forth. I handle the paperwork part of it and Terry runs the farm. He’s amazing and so good with the horses, I can’t speak highly enough of him. We couldn’t possibly have the business without him.

“Terry is the only one who’s fulltime but all our kids take an interest. After we won the Jugette, I was on the phone with my daughter Drew and I was like, ‘We just won the Jugette!’ She texted all the other brothers and sisters and everyone was watching the replay. They’re all very interested in how we’re doing but they don’t actually work in the business.”

Caviart’s main trainers are Arledge, Nancy Johansson and Noel Daley, who trains Caviart Ally. Daley recommended the purchase of Caviart Ally, as he worked with family member All Speed Hanover. The Chaffees were actually looking to upgrade by purchasing a filly broodmare at Harrisburg, but figured if the horse could race, they would do that as well. They got Caviart Ally for $35,000.

“Noel looked at her and said she didn’t look like All Speed because he was taller, but he thought she was the right size and looked perfect for a Bettor's Delight [sired horse] so we bought her and she has become everything,” Judy Chaffee said. “She’s become our best racing filly ever and will certainly be at the top of our list for broodmares once she gets there. We’ll race her at least another year, maybe two years before we look to breed her.

“Ally certainly owns our hearts. It’s been a long time coming and it’s been a dream, and it finally happened.”

AFTER THE WIN, Judy Chaffee posted on her Facebook page, “The biggest and best day ever in racing!!! Thank you Caviart Ally -- and trainer Noel Daley, driver Andy McCarthy, son Terry Chaffee who is COO of our farm and represented us at Delaware -- and all of Team Daley. And thank you to my husband who allows me to fulfill my dreams with the horses!!!”

Indeed, the happiest part of this story is that going into the horse business together only helped to strengthen Buck and Judy’s already solid marriage.

“It’s been great,” Judy said. “We generally agree on everything and if we don’t, we work it out. So, we’ve never had any problems. We both love the horses, we love the racing. We both get excited together and we share the experience. So, if anything I think it’s a wonderful thing for a marriage.”

A marriage that experienced four days in September that will certainly be one of its high points.