Planning for the worst while helping city residents feel their best. 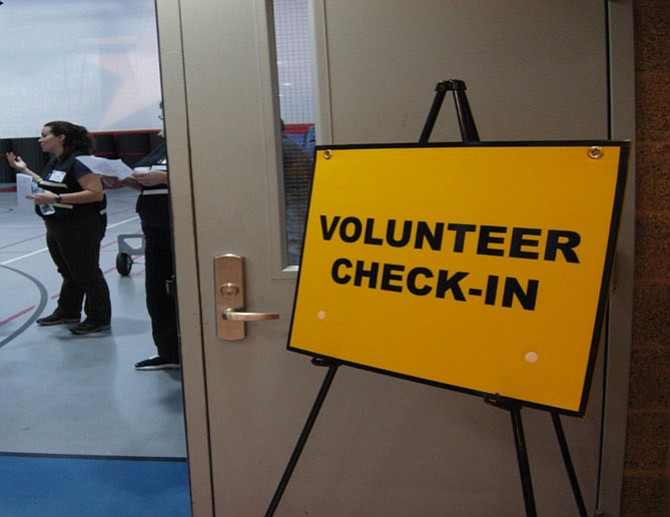 Alexandria is in the grip of a medical emergency. A mysterious strain of influenza is creating a deadly health crisis, and it doesn’t seem to be responding to the standard flu vaccine. City health officials are putting out an all-points-bulletin to residents, urging them to come to one of a series of eight pods dispensing a special vaccine.

The annual exercise will be conducted this weekend at Cora Kelly Recreation Center. Fortunately for city residents, it’s also an opportunity to get a free flu shot while also meeting a mandate from the Centers for Disease Control and Prevention to demonstrate an ability to dispense medical counter-measure. The training drill is a way for health officials to plan for the worst while helping city residents feel their best.

“We also practice our request and receipt of vaccine from the strategic national stockpile,” said Zvi Gruenspecht, public health emergency management coordinator at the Alexandria Health Department. “The scenario is that we receive it, and we are able to vaccinate. If we only received a certain amount, we would vaccinate as many as we can.”

It all started back in 2009, when a respiratory disease known as swine flu was sweeping the nation. The standard seasonal vaccine didn't work against this particular strain of influenza, which was alarming because it struck young and healthy people in a way that doesn’t usually. It became an epidemic and then an international pandemic. That accelerated a need for mass vaccinations, leading health officials to consider combining disaster planning scenarios with flu shot clinics.

“After H1N1 settled down, health departments in Virginia said we need to keep doing this to keep our skills,” said Alexandria Health Department Director Stephen Haering. "And, oh by the way, why don’t we use this flu vaccine that we’re using for the exercise to see how efficient we are but also serve folks who might not otherwise get the flu vaccine.” 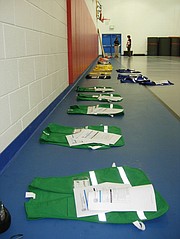 Courtesy of the Alexandria Health Department

Vests are laid out in preparation for public health officials to administer flu shots as part of a disaster planning scenario in Alexandria.

THE DISASTER PLANNING scenarios play out across the state every year in each of the 34 health districts. The Virginia Department of Heath uses $200,000 of federal grant money from the CDC to purchase 20,000 doses. Each of the local health districts collects information on how many people are vaccinated and any kind of problems that might arise, and those numbers are compared to previous years to see if they are making progress.

“We measure the throughput, how quickly it takes people to go through a clinic,” said Bob Mauskapf, director of emergency preparedness with the Virginia Department of Health. "Some of them are walk through, and some of them are drive through. So we’ve tested both of those modalities.”

Over the years Virginia health officials have been conducting these disaster scenario flu shots, they’ve run through several different kinds of scenarios, everything from health emergencies like smallpox and influenza to terrorist threats like anthrax and the plague. Mauskapf says the annual exercises have been successful in improving the efficiency of health districts to put people through a mass vaccination clinic. The department often works with partners like the local hospital or emergency services. Here in Alexandria, the Medical Reserve Corps and ALIVE help facilitate.

“We try to hook it into, wherever possible, vulnerable populations, and folks that might not otherwise have access to flu vaccines,” said Mauskapf. “This is something we intend on continuing into the future as long as the funding is available.”

THE FIRST DISASTER planning flu shot clinic in Alexandria was conducted in 2011 in two locations on the same day, one at Cora Kelly Recreation Center and another at the Church of the Resurrection. Over the years, the exercise have been conducted at Ladrey Senior Building, the Annie B. Rose House and the city school system’s bus barn. In the early years, the clinics lacked some efficiency because entrances and exits were not clearly marked. So that was one of the first lessons of moving people quickly in and out.

“Our coolers now are much more state of the art, and you can actually see the temperature without opening the cooler,” said Haering. “Now we have portable coolers that we can see the temperature instead of the health-care provider or nurse opening it up and looking at the thermometer because the minute you open the door you are losing the coolness.”

Some of the changes were simple, like changing the brand of bandages that were difficult for the nurses to open. Others took some more forethought, like including signs in multiple languages and pictograms. One of the key additions that happened over the years city officials have been conducting the exercises is to include a logistics person who can handle issues as they arise, leaving nurses to continue vaccinating while the problems are fixed. And although the scenarios have a fictional crisis, the exercise are more focused on coordinating resources rather than focusing on particular disaster scenarios.