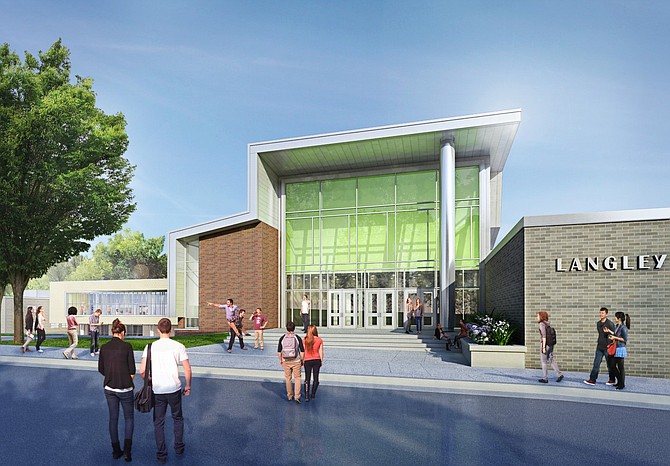 The rendering of the main entrance to the school shows the new library, which has tall windows on all three exterior walls, to the far left. Photo courtesy of Perkins Eastman

Langley High School Librarians Kathleen Ortiz and Philip Clark did the honors of cutting the ribbon. They tried to use a giant pair of ceremonial scissors, but they were not sharp enough for the job. A typical pair was brought in for a proper snip.

Langley High School debuted its new library and fine arts wing on Tuesday, Oct. 17, with a ribbon cutting, an array of hors d’oeuvres and music played by the high school’s string orchestra.

“In many ways, this is the nerve center of the school; the life blood,” Langley High School Principal Frederick Amico said while standing in the library during the ceremony.

Administrators for the Fairfax County Public School district joined in the milestone.

“You are getting a beautiful new, 21st century school for these kids who are truly living and will be adults and thriving in the 21st century,” Superintendent Scott Brabrand said during the ceremony. “It is so great to see this next chapter that we’re going to celebrate today with the media center take fruit.”

Ryan McElveen, member-at-large of the FCPS Board, and Douglas Tyson, assistant superintendent, were also in attendance.

“When [the renovation] is all said and done, it’ll be awesome,” Amico, whose school is using 36 trailers for instruction while classrooms are being worked on, said. “As [new portions of the school] get released to us, they’re really nice. I’m happy.”

THE RENOVATION of Langley High School began back in November 2014.

“FCPS takes its time in design and permitting and construction because we do phased, occupied [buildout],” said Brian Donnelly, associate principal with Perkins Eastman, a planning, design and consulting firm. “We have to work around keeping kids safe and teachers safe during construction.”

A large two-story science addition, administration offices and a performing arts center with both a black box and full-size theater were built in the back of the school during the first phase of construction, which lasted approximately two years, according to Brady Rauch with the FCPS Office of Design and Construction Services.

This first phase was completed when a new gymnasium and auxiliary gymnasium were completed last summer.

“We simply moved into the instructional spaces vacated by moving into the large science addition for phase two,” Rauch said via email. “We also began the library addition, fine arts wing and locker rooms.”

The locker rooms, miscellaneous classrooms, a weight room, a wrestling room and a student services area (where the old library was) are currently under construction, all of which will be completed by start of the 2018 school year, according to Rauch.

Construction of a kitchen, café, an outdoor amphitheater and remaining site work will be conducted over the summer break this school year, according to Rauch.

“There’s a big courtyard in the middle of the building,” Donnelly said. “When we started the design, nobody even knew it was there. From the corridors, you couldn’t even see it.”

The designers’ main objective was to use the courtyard and make it the heart of the school and have every program area connect to it in some way.

“Once this is complete, you’ll be able to see it from the library, you can see it from the weight room, from the cafeteria, from a science classroom; all of the different programs have some connection to that central hub,” Donnelly said. “I think that’s my favorite part of the building. The fact that we were able to organize all of the disparate parts of a high school, which are pretty sprawling, and connect everything back to one central space. I think that’s really critical in building community and helping the school feel like one space.”

THE LANGLEY HIGH School Parent-Teacher-Student Association is already planning to work on landscaping for the courtyard and other outdoor areas of the school. The group would like to incorporate benches, trees and other plants to the grounds.

“We’re working with the science department for the plantings and things that are going to be happening there,” said PTSA President Jennifer Feinstein. “We’re looking for an architect to work with who could come up with a plan for the entire property and then we could try to work on fundraising and installation in different stages.”