What’s on the Road Ahead for Centreville and Chantilly
Votes

What’s on the Road Ahead for Centreville and Chantilly

Transportation projects slated for this area. 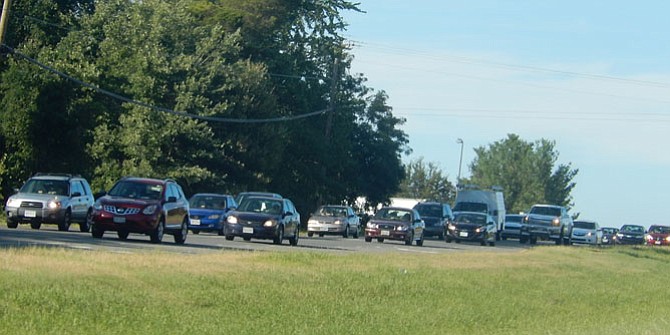 Vehicles head slowly south on the two-lane section of Route 28 in Centreville during the evening rush. Photo by Bonnie Hobbs. 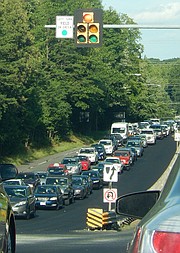 Westbound Route 29 traffic approaching Stringfellow Road heads home to Centreville in early evening. Having three lanes on each side will help ease this rush-hour gridlock.

(Click on "Download .JPG" to see large map.) Map of the I-66/Route 28 Interchange project area showing one of the proposed design alternatives.

A variety of road projects are on tap for the local area – and, hopefully, they’ll ease congestion and make life easier for Centreville and Chantilly residents, as well as people coming here to work and shop. Below are details about what’s planned:

Good news for drivers using the I-66/Route 28 exits and entrances in Centreville: A fix for the congestion, especially bad during rush hours, is on the way. The Route 28 Interchange will be constructed as part of VDOT’s I-66 Corridor improvements. The project area extends north to where Poplar Tree Road meets Route 28, east to Stringfellow Road, and west to near the I-66/Route 29 intersection. And it eliminates four traffic lights on Route 28.

It adds a new bridge funneling traffic from Poplar Tree Road into Ellanor C. Lawrence Park and provides a new access to the park from Route 28. It also improves the Route 28 bridges crossing I-66 and will provide new access ramps to the proposed managed lanes that are part of the Transform I-66, Outside the Beltway project.

The state has incentivized the work by offering bonuses if the Route 28/I-66 interchanges, as well as the Walney Road and Braddock Road improvements, can be done early in the I-66 widening project. An alternate has not yet been selected, but public hearings on the proposed design are anticipated for this fall.

This project will widen Route 28 from four to six lanes between Route 29 in Centreville and the Prince William County line. The work includes intersection improvements, plus pedestrian and bicycle facilities.

Cost estimate is $47.35 million, and FCDOT approved that amount. And the NVTA has allocated $5 million to fund the design and engineering phases, as well as right-of-way acquisition, environmental mitigation and construction.

This widening complements the I-66/Route 28 Interchange and, in conjunction with other road projects, would complete the Route 28 Corridor through the county.

A development just south of the county line is expected to exacerbate existing congestion. So this widening is intended to reduce significant congestion between Prince William and Centreville. And as a transportation corridor of regional significance, it would improve access to Dulles International Airport, Reston and Herndon.

This project provides an alternative to Route 28 that goes from Centreville to the Westfields Corporate Center. It received partial funding for an alignment study, environmental analysis and preliminary engineering. Cost estimate is $81.55 million.

This overpass could reduce congestion at the I-66/Route 28 and I-66/Route 29 interchanges. In addition, a future Metrorail station near this site is listed on the county’s Comprehensive Plan.

This project provides pedestrian facilities on the north side of Route 29 and widens Route 29 in this area from four to six lanes. It complements the VDOT bridge-replacement project at Little Rocky Run and completes the widening of Route 29 from Shirley Gate Road to Centreville.

It’s currently the last segment of Route 29 between the City of Fairfax and Centreville that’s not six lanes, so this work would eliminate the last remaining bottleneck. Cost estimate: $32.7 million; FCDOT approved: $25 million. Last fall, the Board of Supervisors approved extending the limits of this project from Union Mill Road to Pickwick Road. Preliminary engineering could start as early as July 2018.