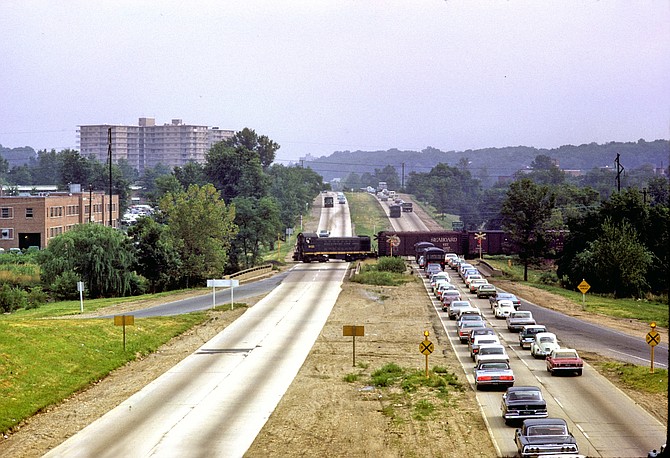 In the 1960’s, the W&OD railroad still had a few at-grade crossings like this one at I-395 in Shirlington.

The railroad station in Vienna was a center of activity at one time.

After the slideshow, W&OD historian Paul McCray talks with Michelle Scott, Executive Director Shepherd's Center of Oakton-Vienna and an audience member about the presentation.

One of the few remaining lapel pins on Barbara Hildreth’s shirt.

1847 a train line was authorized by Virginia to serve markets in D.C. and Alexandria

1859 it started as the Alexandria, Loudoun and Hampshire Railroad

June 17, 1861 it was the center of the Battle of Vienna between Union and Confederate troops

1874 the rail line was extended to Purcellville

1894 Southern Railway took it over

1916 railway workers were unionized, there was a strike and Samuel Gompers stepped in

1936 the Great Depression took a toll on the railroad

1968 the rail line stopped all service

1977 the park service bought the property

1978 the park service began work on the W&OD trail

For Vienna, May 31, 1951 was an important day for transportation modernization in Northern Virginia, as the Washington and Old Dominion Railroad made its last trip carrying passengers. The rail line would continue on for another 17 years with freight service on those tracks until the whole rail line would come to a halt in 1968. It was then turned over to the park service, which turned it into the W&OD bike trail.

It all started in 1847 when the markets in Alexandria and Washington, D.C. needed a rail line to transport goods from the farmland eastward and the planners got to work. It was not until 1859 that rail officials started building the “Alexandria, Loudoun and Hampshire Railroad,” which survived the Civil War, Spanish American War, the Depression, both World Wars and was finally halted by the popularity of the automobile.

“The Metro out 66 and the Greenway have taken the place of the W&OD,” said Paul McCray, the W&OD historian, at a recent presentation at the Shepherd’s Center of Oakton-Vienna. The 45-mile rail line stretched from Shirlington to Purcellville, and McCray managed the trail for the park service from 1985-2005 from his office in Ashburn. “The railroad was Main Street,” he said, “the W&OD had a strong influence on how the area was developed.”

VIENNA RESIDENT Barbara Hildreth has been dubbed the “mother of the W&OD trail,” and talked about the day she brought the idea of a bike trail to county planners shortly after the rail line has ceased. The planners wanted to use it for a bus line, but “the trail won,” she said. Hildreth was at McCray’s presentation and wore a W&OD pin on her collar, which is one of the only ones left in existence. She gave them out to the Friends of the W&OD about 10 years ago, and members of a task force that was looking to repurpose it. McCray wasn’t too familiar with the trail’s history when he got the job as the trail manager in 1985. Since then, he has collected more than 6,000 trail memorabilia items which included pictures, books and artifacts, as well as a rich history he has put on a slideshow.

McCray was invited to speak at the center after one of the volunteers had seen his W&OD presentation at another location, and thought the residents of the Shepherd's Center of Oakton-Vienna might benefit. “Considering the age of our group, many of our folks probably used the rail system before cars were the rage,” said Michelle Scott, Executive Director Shepherd's Center of Oakton-Vienna in an email.

On June 17, 1861, the train was the centerpiece of the Battle of Vienna, when the Union troops rode the train out from Alexandria and got attacked by the Confederate Army. In following years, the 2nd Massachusetts Cavalry was stationed around the train station in Vienna. In 1870, coal was a big item for trains, and the rail line was reorganized as the Washington and Ohio Railroad, and Western Union used the train as a principal carrier of messages. It was “the UPS of its day,” said McCray.

In 1898, a stop was implemented on the line at a place called Camp Alger, which is in present day Merrifield, and it helped transport the soldiers in the Spanish American War. Finally in 1912, it was renamed the Washington and Old Dominion, and there was a West Falls Church and a Great Falls station. “People started moving out to the countryside and “the passenger service was really popular,” McCray said. In 1918, the train was used to transport flour from Herndon to France shortly after World War I.

“Throughout all this, the W&OD was having problems,” said McCray.

AT ONE POINT, the nickname was the Wobbly and Old Dilapidated Railway. In the 1930s, they started losing passengers, so the W&OD created a bus line to get passengers to the stations, similar to community bus lines now, such as the TAGS buses in Springfield or the CUE bus in Fairfax.

There were many at-grade crossings which weren’t too popular with the car traffic. There was an at-grade crossing at I-395 in Shirlington and another at Maple Avenue in Vienna. “A flagman would get out and stop the cars,” said McCray. When Dulles Airport was built, the train transported all the building materials. Finally the park service took over and started building the trail in 1978.

“At least two million people a year are using it,” said McCray.