Telling Tales of the Rail
Votes

Telling Tales of the Rail 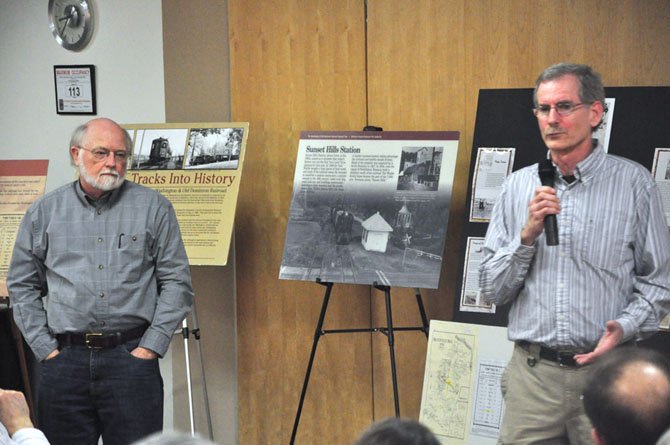 From left, Ron Beavers and Paul McCray tell the story of the Washington and Old Dominion Railroad at the Reston Community Center Lake Anne Thursday, Feb. 23. Photo by Alex McVeigh.

Reston — The Reston Historic Trust presented the story of the Alexandria Loudoun and Hampshire Railroad, which later became the Washington and Old Dominion Railroad at the Reston Community Center Lake Anne Thursday, Feb. 23. Local historians Ron Beavers and Paul McCray told the story of the line, which began in Alexandria in 1847.

The story of the railroad began in 1846, when 31 acres of what was then Washington, D.C. was the subject of retrocession and returned to Virginia. The Virginia General Assembly approved the retrocession in February 1846, and congress approved it in July.

Virginia formally accepted the retrocession on March 3, 1847, and 17 days later, the General Assembly approved the charter of the Alexandria and Harper’s Ferry Railroad Company.

IN MARCH 1853, the railroad re-chartered as the Alexandria Loudoun and Hampshire Railroad, running from Alexandria to Leesburg to Hampshire County, located in western Virginia.

By 1859, three engines were delivered, and by 1860 there was service to Vienna and Farmwell (now known as Ashburn). But in May 1861 Virginia voted to secede from the Union and the day after the vote, the Federal Army occupied Alexandria and confiscated an engine and eight miles of track.

As the Confederate Army fled the area, they destroyed the line west of Vienna and most of the railcars.

Beavers presented copies of correspondence from Confederate Gen. Robert E. Lee from May 1861, when he ordered one of his generals to destroy all bridges of the railroad "as far down towards Alexandria as possible."

Lee’s concern was evident by another letter written the next month, when he expressed his hope to one of his colonels that the rail had been destroyed.

McCray took over to tell the story of the railroad after the Civil War.

"The railroad was mainstream in Northern Virginia for a long time, many of the communities that grew up around the railroad are ones that are still around," he said. "Dunn Loring, Vienna, Ashburn, Sterling, that’s where people wanted to be because they could ride the railroad to work, they could get their farm products to the market quicker."

He talked about how Fairfax and Loudoun Counties became huge milk producing areas because of the railroad, which allowed the milk to be shipped quickly to the market, which was especially important during the summer months.

As the rail was rebuilt after the Civil War, tons of dirt had to be hauled in to support the tracks.

"Railroads couldn’t pull up steep grades, so they snaked this railroad through the low lands as best they could, but there were some areas that were too low, and some too high. When it was high they had to cut it out, when it was low they had to build it up," McCray said.

The railroad was renamed the Washington and Ohio Railroad in 1870, which McCray called "ambitious" because it never made it to the Ohio River. It went through several names and owners over the next quarter century before being purchased by Southern Railway in June 1894.

"They were buying every railroad they could at that point, they were flush with cash. This was the railroad baron era, and they were just buying up everything in the area," he said. "They didn’t care if it made money, they liked it when it did, but they weren’t real worried about it."

"The two gentlemen who started the railway died within a year of the W and OD Railroad being formed, and the way the railroad company was set up, their heirs could not sell the railroad," McCray said. "They had to own it whether they liked it or not, so what they had was absentee ownership. They really didn’t want to run a railroad, but couldn’t get rid of it."

As the company’s disinterest grew, the train began running late and got a reputation as the "Old Devil" railroad, "Walk Over and Die" railroad and "Wobbly and Old Dilapidated" railroad, among others. It later went bankrupt and went through several changes.

"The passenger service gave up in 1941, and part of what did that was the railroad lost it’s mail contact," McCray said. "Now the mail was hauled out to Leesburg and Purcellville by trucks, and it wasn’t worth it and ridership was declining."

ALMOST 100 PEOPLE attended the presentation Thursday night, many of whom had no idea the bike trail that they use on a regular basis was such an integral part of local history.

"I knew it was a railroad at some point, but had no idea of its story, and the fact that Robert E. Lee felt such a need to destroy it, and all the changes it went through over the next 80 years was fascinating," said Harold Vogel of Reston. "I know the next time I go on a bike ride down the trail with my family, I’ll have a story or two to tell them about what went on there."

Steve Telfair of Reston said he came into the presentation looking to confirm things he already knew, but soon found himself outgunned.

"I love to study the history in this area, and thought I had a pretty good grasp on it, but Paul and Ron really dropped some nuggets that I had never heard before," he said after the presentation. "I can’t wait to pick their brains and find out what I should start reading next."