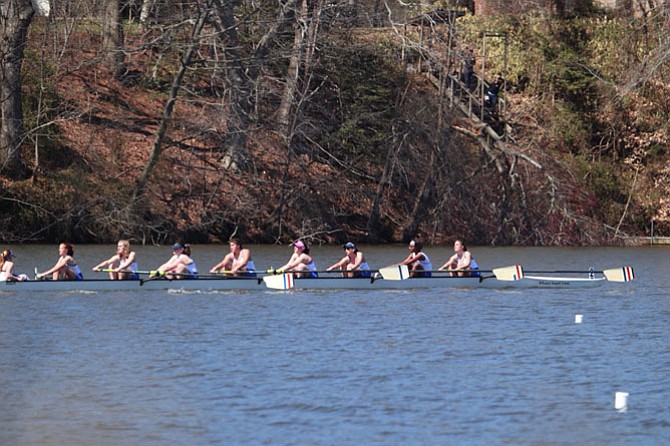 The T.C. Williams High School Class of 2021 announced at the first regatta of the Spring 2018 season that they intend to be a force on the water, with Frosh rowers winning two races, coming in a close second, and contributing to a first place finish with upperclass rowers in a fourth boat.

On Saturday, March 31, TC rowers traveled two hours north to St. Andrews School in Middleton, Del. for their traditional opening season regatta on Noxontown Pond. While this race often features temperatures barely above freezing and occasionally has been run in snow squalls, the weather this year was a relatively balmy 55 degrees with sunny skies and light breezes, offering excellent racing conditions.

Setting the pace for the Titans in the second race of the day was the Frosh Women’s 8A boat, which roared down the 1500-meter course to finish with a time of 5:28.5, more than 10 seconds ahead of St. Andrews and 26 seconds ahead of third-place Holy Spirit. The Frosh Women’s 8A includes rowers Riley Bucholz, Libby Padilla, Mackenzie Allen, Kaitie Dennis, Wellesley Snyder, Grace Yokitis, Adrienne Carter, and Halle Reinholtz, and coxswain Caroline Miles.

In the next event, the TC Men’s Frosh 8 battled evenly down the course in what became a two-boat race with the oarsmen from Mainland. The Titans finished second with a time of 5:07.3, just over 3 seconds short of the win and 13 seconds ahead of number 3 Ocean City.

Immediately after the Frosh Men, the TC Women’s Light 8 took to the water in an event that included not only other Light 8 boats, but typically stronger Junior 8 and Third 8 boats as well. The TC Light 8 boat features juniors Chloe Marsh and Anna Jane Guynn, sophomores Ava Elkins, Felicity Brock, Alaina Browand, Lila Arnold, and coxswain Candace Goodman, and frosh rowers Anna Hill and Caroline Surratt. The Titan Lights scored a win in 5:24.2, over 3 seconds ahead of the Holy Spirit Third 8s and 10 seconds better than St. Andrews Third 8s.

Racing in a full six-boat field, the TC Frosh Women’s 8B boat secured the largest winning margin of the day with a time of 5:44.9, almost 25 seconds ahead of runner-up Holy Spirit and roughly half a minute ahead of number 3 Mainland. The Titan Frosh Women’s 8B includes rowers Grace Willmore, Katie Rose Milone, Maggie Coombs, Annalise Roberts, Emily Surratt, Ellie Nebolsine, Julianne Joven, and Julia Guessford, and coxswain Zaida Calix-Tello.

TC’s final win of the day came in the Men's JV 4+ category, where the Titans entered two boats and finished first and third in the five-boat field with times of 5:35.8 and 5:53.9, respectively. The rowers on the Titan’s winning JV4+ include Griff Austin, Will Bavin, Adam Elnahas, and CJ Chidlow, with coxswain Clare Williams.

Next up for the Titan Crew is the Walter Mess Regatta at Occoquan on Saturday, April 7.